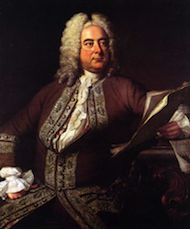 On Sunday, we commemorate G.F. Handel’s birthday: Whether to say Georg Friedrich (German) or George Frideric (English), that is the question. Born in Halle, Germany, where a yearly festival of his music is held, he absorbed the Italian style in an extended trip to Italy. Later, after securing a job with the Elector of Hanover, Handel visited London to produce his opera, Rinaldo, and was impressed enough to emigrate and live there permanently.

He had many English aristocratic patrons (including his former employer who, in the meantime, became King George I of England), but many of them were not as lucky as he was in the South Sea Bubble of 1719 (one of the most famous and destructive financial stock bubbles in history). In the wake of the disaster, the Lord Chamberlain of England banded together a few nobles to create an opera house, the Royal Academy of Music, which Handel directed and composed a number of his famous operas. In the meantime, he became a fully naturalized English citizen and wrote the famous anthems for the coronation service of King George II, in 1727.

Handel became quite independently wealthy, and even though he was pushed out of the opera biz several times, he kept at it, producing them through the 1730s (including some of his greatest works, like Orlando (1733), Ariodante and Alcina (both 1735), and Serse (Xerxes, 1738). But with the financial return on opera dwindling, Handel turned to oratorios full time (he had written a few, including the mighty Saul in the 1730s), and in 1741, the year of his last opera, Deidamia, he spent three weeks writing the first version of The Messiah, one of the most famous classical works of all time.

The oratorios were in English and, as scholar Ruth Smith showed in a 2005 book (Handel’s Oratorios and 18th Century Thought), the librettos were very topical, touching on contemporary political and religious conflicts. Together with all the official work that he undertook for the royal house (such as the Music for the Royal Fireworks, 1747), Handel became a national celebrity. The Anglican (Episcopal) Church has an official Handel feast day in its liturgical calendar, on June 28. Find out more about Handel, explore his music, watch video, find fun facts and much more in SFCV’s Composer Gallery page.