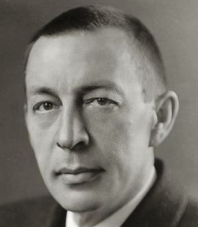 This week’s birthday boy, Sergei Rachmaninov, was one of the last great performer-composers in the classical tradition. And unlike 19th-century virtuosos, that means we have recordings of his playing which definitely establish him as one of the greatest players of his time, and probably of the entire 20th century.

The music that Rachmaninov wrote for himself to play is notorious for its difficulty: The composer was six feet three inches tall with enormous hands that could stretch over huge lengths of the piano keyboard. Most players after him have had to develop work-around solutions just to play all the notes.

But Rachmaninov wrote a wide variety of music, beyond the piano pieces. In addition to symphonic works, he composed the remarkable All-Night Vigil (Vespers Service) a major choral work, which was recently performed locally by both Cantare Con Vivo and the Pacific Boychoir; songs, and a one-act opera (Alekko) that all deserve more attention than they get. Find out about Rachmaninov’s life, stock up on some fun facts, and listen to the music on SFCV’s biography page.