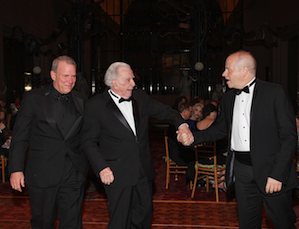 Carlisle Floyd, acclaimed at the San Francisco Opera's annual meeting a couple of weeks ago, was the toast of town in Houston last weekend, once again in the company of long-time booster David Gockley, SFO general director, previously of the Houston Grand Opera.

As reported in the Houston CultureMap:

It's not often that a non-profit scores such a renowned collection of complementary headliners as the University of Houston's Moores School of Music managed for its 27th annual gala. But with the dean of American opera, Carlisle Floyd, as honoree, it was practically a given that San Francisco Opera general director David Gockley would join Houston Grand Opera artistic and music director Patrick Summers as honorary co-chairs.

The Moores Society hosted the evening held in the Grand Foyer of Wortham Theater Center, a move from the traditional UH campus locale that played up the relationship between the Moores School and HGO.

"I cannot emphasize enough how important the role of the University of Houston was in founding the Opera Studio and bringing Carlisle from Florida State to the University of Houston," Gockley told the black-tie gathering. "Gradually over the years, the presence of the studio not only in the opera house, but on the campus of UH encouraged what turned out to be the Moores School of Music." Gockley was general director of HGO when Floyd was recruited to Houston in 1976.

Summers said: "There isn't a day that passes in this company where we don't feel the extraordinary legacy of Carlisle Floyd. Carlisle's relationship to this company is unprecedented in American opera. There is no American opera house that has had such a long and deep association with a living composer."

In accepting the John Moores Award, Floyd said, "It's a wonderful thing to look back on the UH school of music when I arrived here in 1976 and where it is today with that beautiful theater. It's just a formidable place to do opera. I couldn't be happier with the heritage that I had a part in."

Incidentally, the Houston report got Floyd's age wrong in the headline and the story. He was born June 11, 1926, so for now, he is only 87 — as Gockley had correctly introduced him in San Francisco.