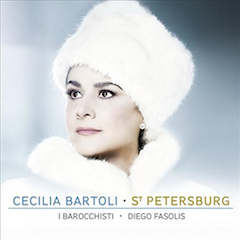 A first glance at the great Cecilia Bartoli’s latest recording project, St. Petersburg, released Oct. 14, might suggest that the mezzo-soprano has unexpectedly embraced core Russian repertoire. Not quite. Rather, her research has unearthed a treasure trove of “Russian” Italian Baroque music, written or performed in Russia during the reign of three Tsaritsas: Anna (1730–1740), Elizabeth (1741–1761), and Catherine (1762–1796). Often created by imported court composers, the music was written expressly to “civilize” Russian culture.

Although it’s hard to tell, given Bartoli’s occluded pronunciation, two of the album’s 11 arias are in Russian, and the rest in Italian. While only one composer is familiar to most of us — Domenico Cimarosa wrote his opera seria, La vergine del sole, while serving as Russian court composer in St. Petersburg from December 1787 to June 1791 — much of the music has a familiar, “haven’t I heard that before?” quality that, if not always inspired, consistently brings pleasure.

If listening to Bartoli’s supreme rendition of Raupach’s melodies affects you as it did me, you may find yourself giving thanks for the gift of life, allowing us to immerse ourselves in so much miraculous beauty.

Bartoli, in superb voice, takes any number of vocal risks. Hermann Raupach’s rage aria, “Razverzi pyos gortani, laja,” from Altsesta (1758), finds her in full throttle, dangerously exposing the white center of her voice as she whips up a frenzy. Turning on a dime, she then brings some of the most gorgeous, limpid vocalism imaginable to “Idu na smert” from the same opera. Her top extension is glorious (if hardly house-shaking), the short trills are perfect, and the long-breathed, Bellini-like lines are an example of grace through music. The length of her unbroken lines in “De’ miei figli” rivals anything ever recorded by the long-breathed Montserrat Caballé and Jessye Norman. If listening to Bartoli’s supreme rendition of Raupach’s melodies affects you as it did me, you may find yourself giving thanks for the gift of life, allowing us to immerse ourselves in so much miraculous beauty.

This being a Bartoli project, rest assured that you’ll hear some great runs, beautiful head tones, and astounding technical flourishes that, in this repertoire, seem less idiosyncratic than of yore. You’ll also hear, from I Barocchisti under Diego Fasolis, an abundance of felicitous timbral combinations, notably in the opening to Cimarosa’s “Agitata in tante pene.” The contrast between the bright edge of the ensemble’s period instruments and the smoothness of Bartoli’s attack is a special joy.

Copiously illustrated and annotated with what amounts to a history lesson on the Baroque era in Russia, this is another wonderful recording from one of the greatest singers of our or any age. Look for it as a hi-resolution download on HDTracks.

The sole soprano in this mezzo-rich survey, Dominique Labelle has traversed many paths since winning the Metropolitan Opera National Council Auditions in 1989. A known presence in the Bay Area and on YouTube, thanks to her many appearances with Philharmonia Baroque Orchestra under Nicholas McGegan, Voices of Music, and Musica Pacifica, Labelle has never failed to inspire delight and wonder both on recordings and in person.

Yet, as familiar as we may be with her artistry, which was first recorded after she appeared as Donna Anna (opposite then-soprano Lorraine Hunt) in Peter Sellars’ 1991 production of Don Giovanni set in Spanish Harlem, we’ve had virtually no opportunities to hear her in recital of more modern fare.

Thus I can only express gratitude for this disc of songs by Ravel, Saint-Saëns, Hahn, Britten, and Wyner. Recorded and mixed in 2012 by McGegan's husband, David v.R. Bowles, the program finds Labelle singing with uncommon freshness and beauty of tone. American composer Yehudi Wyner (b. 1929), who taught at Yale and is perhaps is best known ion the West Coast for having won a 2005 Grammy and the 2006 Pulitzer Prize, plays with a luminous liquidity and lack of affect that belies his age.

Taking her cue, perhaps, from Jane Bathori, who premiered Ravel’s Trois Poèmes de Stéphane Mallarmé in 1914, Labelle brings lovely freshness and unaffected restraint to Ravel’s marvelous settings of Mallarmé’s intentionally obscure, romantically excessive verse. If the voice is not as sensuous as it could be in the first song, “Soupir” (Sigh), its youthful simplicity is especially rewarding. Wyner does a superb job of injecting the mystery and colors normally supplied by a chamber ensemble.

Labelle is a joy in five songs by Saint-Saëns. “Danse macabre” might have benefitted from more speed, but the duo’s tongue-in-cheek approach — Labelle’s emphasis on the word “horreur” is to savor! — more than compensates. Their take on five songs by Hahn and four of Britten’s Cabaret Songs is equally rewarding. Note the aptness of Labelle’s tone for Hahn’s “Le Printemps” (Springtime), and the manner in which she centers her sound in her heart for a beautiful rendition of “L’Heure exquise” (The exquisite hour). This is a performance to relish alongside those of Susan Graham and Maggie Teyte (who was friends with Hahn).

Ditto for the duo’s second recording of Wyner’s The Second Madrigal: Voices of Women. Written for Labelle, but usually performed by the rather obscure combination of soprano, string quintet, wind quintet, and percussion, the eight settings display an accessible modernism that dovetails perfectly with Ravel’s. “When He Pressed His Lips” shows both artists excelling in conveying the rush of passion and apparent loss of mental control.

With her recent appointment to the voice faculty of the Schulich School of Music at her alma mater, McGill University, it is unclear how much Labelle will continue to travel to the U.S. for performance. Thus the extra importance of a recording of songs that showcase her at her considerable peak. 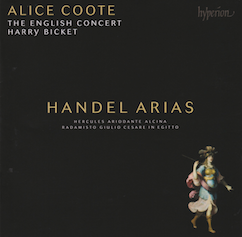 Brilliant in art song and famed for her assumptions of “trouser” roles, mezzo-soprano Alice Coote now turns to Handel. Supported by The English Concert under Harry Bicket (the same forces with whom the late Lorraine Hunt Lieberson recorded her final collection of Handel arias), Coote shows herself a supreme interpreter, if not always a flawless singer.

Let’s focus, first, on the strengths. From the opening phrases of her first aria, “Quando mai, spietata sorte” (When, o pitiless fate), from Radamisto, Coote establishes herself as an artist who immediately inhabits the heartfelt core of Handel’s music. Even in an aria as fiery as “Where shall I fly?” from Hercules, which Joyce DiDonato recorded at a faster and undeniably showier clip — DiDonato leaves in the dust virtually every other mezzo save for Cecilia Bartoli with her “take no prisoners” trills — Coote distinguishes herself by establishing greater emotional contrast between sections, and allowing us to more deeply feel the state of torment.

Then there is the rare combination of intimacy and intensity that convinces us that Coote deeply occupies and fully identifies with every character she sings. The inner focus and care she devotes to every word and note make us feel as if her life depends on their utterance.

Then there is the rare combination of intimacy and intensity that convinces us that Coote deeply occupies and fully identifies with every character she sings.

That utterance, as intimated above, is not always flawless. Occasionally, even in the slower material, the occasional range break protrudes. Judging from old acoustic recordings, audible range breaks were common over a century ago, but the modern practice is to smooth them over as much as possible. Here, Coote is only, say, 95 percent successful.

It also must be noted that when she opens up all the way in the arias recorded in her 44th and 45th years, she begins to sound more than a bit mature. It’s not that the voice isn’t in tip-top shape; judging from its steadiness and huge range, it certainly is. But slower music flatters her more. Which is perhaps why the disc features so many slower arias.

A perfect recording? No. But, for its revelatory intimacy, intensity, and artistic integrity, essential nonetheless. 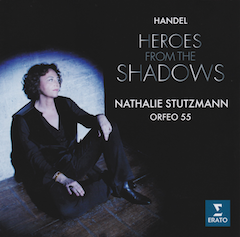 True contraltos are so rare these days that if you were to hear Nathalie Stutzmann’s voice without know her identity, you might understandably think her a countertenor. There’s a curious androgyny to the voice of this cherishable artist, especially as it has darkened with the passage of time, which complements the intentional gender ambivalence of her outfits.

What’s never ambivalent about Stutzmann are her command of a huge range, her nigh-perfect technique, and her dark, rich sound that, to borrow an adjective from the millennial thesaurus, is awesome. Equally impressive is how well she conducts her own period instrument orchestra, Orfeo 55, which plays to perfection.

In Heroes from the Shadows, Stutzmann does something few leading artists would do. Instead of recording the star arias she frequently sings onstage, she turns instead to the repertoire of secondary or even tertiary characters — roles she describes in the introduction as “those characters the audience forgets about at the end of the evening, but who, for a few minutes during the course of the opera, completely bowl them over with some stunning aria. A bit like those extraordinary actors who crop up in films: you know the face, but you can never remember the name.”

Not only are these rarely heard arias gorgeous, but they are also conveyed with loving care. Presented alongside six orchestral interludes that include some heavenly continuo playing — the solo theorbo in “Senti, bell’idol mio” (Hear me, my fair goddess!) from Silla could serve as an example of what truly ensemble playing entails — the recording serves as testimony to Stutzmann’s multi-faceted artistry. And the music, including the occassional musical joke that you simply must hear, is so emotionally potent that the disc would be essential even if Stutzmann were not the vocal wonder that she is.

What’s never ambivalent about Stutzmann are her command of a huge range, her nigh-perfect technique, and her dark, rich sound.

But she is indeed a wonder. For some treasurable examples of Stutzmann’s artistry, turn to her tender and loving rendition of Irene’s “Par che mis nasca in seno” (I feel stirring in my breast), from Tamerlano, whose beauty will convince any Handel lover of the importance of this project. Then listen to the amazing low tones at the start of Ottone’s “Voi che udite il mio lament” (You who hear my lament), from Agrippina. Yes, there are a few questionable accents, but it’s easy to forgive the idiosyncrasies amidst so much glorious singing.

For yet another treat, turn to Cornelia and Sesto’s winning duet, “ Son nata a largrimar” (I was born to weep), from Giulio Cesare, in which Stutzmann joins the sublime countertenor Philippe Jaroussky. Even though it’s Stutzmann who sinks deeper into the feeling of the piece, the vocal blend is so delicious as to make the recording worthy to play beside the version from Stephanie Blythe and David Daniels. With a final note that Stutzmann’s ordering of her 19 selections is masterful, and that the recording is also available from HDTracks as a hi-resolution download, I command thee, o noble reader, to hurry henceforth from this site to thy favourite physical or virtual music outlet, and get this recording and the others in this set now!