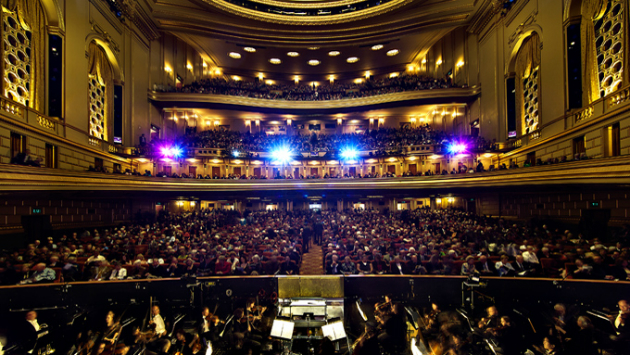 It's a warm summer morning and about 20 people sporting comfy-looking shoes are planted in a line on the cool gray marble floor inside the San Francisco War Memorial Opera House. They're waiting for the lobby box office to open at 10 A.M. to buy $10 standing room tickets, cash only.

That evening is the final, and sold-out, performance of Hector Berlioz' infrequently staged, five-and-one-half hour epic Les Troyens. Some folks in line pass the time staring at smart phones; others chat about singers. One woman, holding a dog-eared copy of the The New Yorker, turned to an article about the Metropolitan Opera's Peter Gelb, frequently glances up from the page at the box office window. Finally the box office window opens and the line starts moving.

Those in line to buy standing room tickets come from near and far. They can be a mix of millionaires and school teachers, young and old. The ticket may be cheap but what they have in common isn't opera on a budget. Rather, say fans and observers, it's a passion for the art form and a kind of camaraderie forged on the ticket line, as well as in the two standing room sections of the opera house. Some standees come almost every night. Others meet at the opera house and fall in, and out of, love. And, for some, a passion for opera becomes an unusual fetish.

In his over two decades with San Francisco Opera, Mark Sackett has found many reasons why people buy standing room tickets. "Some standees have subscriptions and come on their 'off night' to hear their favorite arias or another singer in the role," says Sackett, box office manager and treasurer, in an email. "We have at least two major donors who stand on a regular basis. They come to hear singers that they've sponsored, or simply to hear their favorite opera again."

"There are numbers on the walkway outside the Grove Street entrance doors, so they only need to

arrive five minutes or so before that," explains Sackett. 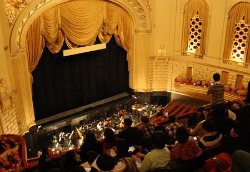 Once a standee is in the opera house, it's first come, first served in terms of claiming a spot. Behind the orchestra section are four wall segments on top of which standees can put a scarf or coat to hold their place. Standing room spots are not marked or numbered inside the opera house. Sometimes standees behind the orchestra area are three deep. The other standing room area is behind the top balcony. Standees are free to move from one area to the other during a performance.

Victor Espinosa, 45, sprints up the front steps of the opera house and into the lobby to join the end of the line. It's his first time buying standing room tickets at San Francisco Opera. "I love opera but I can't afford anything," says the East Bay pre-school teacher. He does a small pivot to model the casual brown Sperry Top-Sider loafers he'll wear during the epic performance starting at 6 P.M. "From the chest up, I'll be looking kind of dressy," he says.

Standing in front of him is Anna Bergman, 47. She saw Les Troyens the previous week from a balcony seat but wants to see it again from the orchestra standing room section. "It really makes a difference to be downstairs to see the sets," says the East Bay resident. Bergman plans to clad her size 7 feet in shoes with an insole for the long performance.

Disa Gambera, 55, has just purchased her SRO No. 18 ticket. Gambera, who lives in Salt Lake City but is visiting family in Marin County, had bought a $35 ticket to see the Berlioz opera the week before. She was, however, unable to attend when her son became ill. An opera buff since her parents brought her to San Francisco Opera to see Luciano Pavarotti in La Bohème when she was 12, she'd gone online the previous day to find a ticket to the final performance of Les Troyens.

"I felt I couldn't afford the ticket that was left," recalls Gambera, an English professor at the University of Utah. "I have strong legs, and decided for $10, I could get standing room for the same place where the $135 ticket was."

To stand, or not to stand, in shoes has had some storied moments in San Francisco Opera's history. The opera's archives associate Ann Farris remembers standing room in the opera house during the city's Haight-Ashbury era. In 1970, she was Kurt Herbert Adler's administrative assistant. That fall Tristan und Isolde was being produced.

"In 1970 we were near the end of the hippie era," says Farris in an email. "Bare feet were the norm for some." But not for Mrs. Beverly, a formidable, long-time head usher. "She ruled. No one messed with Mrs. Beverly. She wore a long black dress, had very comfortable, flat, black shoes, and used a cane. During performances she policed the standees for any behavior not appropriate from her point of view. If anyone took off their shoes during the performances, she gently tapped the feet of the person with her cane and signaled [to] put on your your shoes." Farris watched all of the Tristan performances, standing at the very back of the first floor and was amazed. "The culprits quickly put on their shoes," she recalls.

A Passion For Opera

Many habitués of standing room at opera houses find different ways to express their excitement for opera, observers say.

At one time there was a San Francisco Opera Standees Association. The flowers that used to be thrown onstage were sponsored by the group, according to Sackett. The association's president used to buy the flowers, weight them with small lead fishing weights, so they would fly, and then run down toward the stage just after the performance to throw the flowers to the appropriate singer. "There's no discreet way to say this," says Sackett. "Once he missed." The flowers dropped into the orchestra pit and the weight hit one of the more expensive instruments. "That ended a nice tradition."

Opera expert Fred Plotkin recalls a different sort of passion embraced by standees in his years as performance manager of the Metropolitan Opera, from 1982-1988. It was during a performance of Alban Berg's Lulu that an usher alerted him that, in the orchestra standing room, a couple were engaged in intercourse against a pillar.

"I asked them to be quiet and then I just left them," says Plotkin, author of Opera 101: A Complete Guide to Learning and Loving Opera. "Once they were done, they zipped up, and watched the opera. I like that opera inspires passion, if it doesn't take away from the experience for other audience members. The fact that this kinky couple have sex during Lulu and they're enjoying it, I don't want to negate their passion."

By mid-morning Greg, who declines to give his last name—"I'm a private person," has bought SRO ticket Nos. 30 and 31 for himself and his wife, who is from Poland. "We want to see it [Les Troyens] and can afford it this way," says the 40-year-old special education assistant, who lives in the East Bay. "My wife is more of a Verdi fan but wants to see this; it's not going to happen that often." He lived in Central Europe for a while, where he attended opera for very little money. Standing for five-and-a-half hours isn't daunting for the couple, he says, noting he's stood for as much time or longer at rock concerts and festivals. "If it's something you love, it doesn't matter." The two are aiming to score spots downstairs, where they can stand together. "What's the point if you're not together?" says Greg, "We'll be smiling at each other."

Romance can also bloom at the opera offstage. Sackett recalls two standees who had been coming to the opera for a decade. At one point he noticed they were holding hands at the railing behind the orchestra section. Then, over time, they stopped holding hands, and started buying separate tickets. "Standee love," Sackett says, smiling wistfully, as he guides a reporter around the opera house.

Although Anna and Disa, who haven't met before today, already purchased their standing room tickets, they've circled back to the box office because they can't find where the painted standing line is located on the walkway in front of the Grove Street entrance to the opera house.

Armed with instructions, the two women walk around the corner up to the opera house side entrance, where an observer points out the long, white line that runs the length of the walkway and then circles back to accomodate 200 numbers. At about three foot intervals, there is a black square with a white number painted inside it. Anna finds her No. 19 and Disa finds her No. 20.

"Now we know where to come," says Disa with relief. She'll drive back to Marin shortly before returning to take her place in line around 5 P.M.

"I'm going to get here earlier, and can save you a spot inside," offers Anna.

"Anna," replies the petite brunette, smiling and shaking Disa's hand. "I've made good friends from doing standing room," she says, as they say goodbye. "In fact, I'm still friends with people I stood with at Porgy & Bess."

Fred Plotkin's standee days are over, says the Manhattan-based opera expert and author of Opera 101: A Complete Guide of Learning and Loving Opera. "Last time I did standing room was at a sold-out performance at the Kennedy Center that I wanted to hear. Afterward, my feet hurt, my body hurt. I realized I can't do this anymore."

But for those who still can stand for a San Francisco Opera performance, the price is right at $10, the camaraderie is waiting, and the music superb, say current and former standees.

The delicate question of whether or not to remove one's shoes when standing depends, he advises, on if you've stinky feet. "The nose," says Plotkin, also a food and wine connoisseur, "knows."