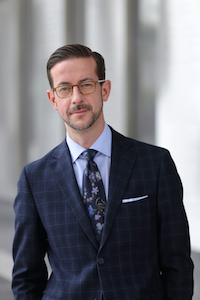 It’s a late summer evening on the Santa Monica Pier. A soft breeze is blowing in off the ocean, there’s the sound of the surf and the glitter of twinkling lights on the Ferris wheel. The aroma of fried clams and kettle corn is wafting on the breeze accompanied by, of all things, a rousing chorus of “Libiamo!” as a crowd of some 2000 people, seated on blankets and deck chairs, enjoy a live simulcast of Los Angeles Opera’s season-opening production of Verdi’s La traviata.

The performance featuring Nino Machaidze, Plácido Domingo, and Arturo Chacón-Cruz conducted by James Conlon is being beamed directly from the stage of the Dorothy Chandler Pavilion to the large screen on the pier. And considering the fact that the production has been updated to speakeasy America, the era of Boardwalk Empire, what could be more appropriate?

At intermission I find Christopher Koelsch (L.A. Opera’s president and CEO) discussing the obvious success of the first-time venture with retiring L.A. County Supervisor, Zev Yaroslavsky, who, several days before (as a gesture for his ongoing support for the arts in L.A.), appeared as a high rolling (non-singing) supernumerary in the opening night performance of Traviata. Both were clearly pleased with the response to the free event and saw its potential to become a new tradition for the city — opera at the beach.

The gathering was also a reflection of how Koelsch is reconfiguring the L.A. Opera envelope in terms of programming, audience appeal, and new venues.

Now 42, Koelsch was born in Boston and grew up in a working class Irish Catholic family where, as he puts it, the arts were not ignored, but hardly stressed. “In their defense, they did take me to the symphony once in a while.” From Boston, Koelsch attended Colgate University in New York where he pursued a double major in English and Political Science. But it was during a work-study year abroad in London that his career path took a decidedly artistic turn. 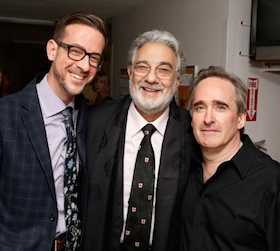 “I’d already been bitten by the music and theater bug,” Koelsch recalled as we sat in his Music Center office. “But I thought for practical reasons I should try to get away from it. But while I was in London I saw Nicholas Hytner’s production of Xerxes at the ENO. It was my first opera. I was 21. That’s when I began to realize you could make a real living at this.”

Determined to become a man of the stage, Koelsch enrolled at the University of Michigan where he received a graduate degree in dramaturgy. He also interned at the Spoleto Festival in Charleston where he met David DiChiera, who was then artistic director of the now defunct Opera Pacific company in Orange County. That was in 1994.

For five seasons, Koelsch worked as rehearsal administrator for the Spoleto Festival, overseeing the myriad details that go into staging a production. It was DiChiera who urged him to come west. And for nine months, Koelsch worked with Opera Pacific.

“In 1997,” he recalled, “I interviewed for a job with L.A. Opera’s founding President, Peter Hemmings.”

He got the job. And in the years that followed, Koelsch honed his skills working closely with Hemmings, who he considers a major influence, Plàcido Domingo, Kent Nagano, the late Edgar Baitzel, and now, James Conlon.

“I think that institutions, because of the nature of their founders, develop a DNA that is to some degree unshakable. We’re still a comparatively young company, but from the start,Peter Hemmings believed in a freewheeling programmatic mix that ebbs and flows between avant-garde and conservatism.”

Koelsch was appointed president and CEO in 2012. Prior to that he held the post of Senior Vice President and Chief Operating Officer and Vice President of Artistic Planning. He oversees all aspects of artistic planning, including repertoire development, music administration, the casting of artists, and the selection of guest conductors. During his 17 years with L.A. Opera, Koelsch said, he has overseen the creation of more than 32 new productions, including five world premieres.

Heʼs also been on a 17-year rollercoaster ride of economic highs and lows with the company, most recently resulting from L.A. Opera’s first complete production of The Ring of the Nibelung. That $32 million dollar, 10-year venture began in 2000 with the announcement of a “Star Wars Ring” that would team director Peter Mussbach with the effects wizards at George Lucas’ Industrial Light & Magic — the proposed budget was $60 million. That plan proved impossible for a variety of reasons, including the impact of 9/11. The project, however, did not die. The Australian movie director Baz Luhrmann (Strictly Ballroom, Romeo and Juliet, Moulin Rouge) was considered briefly. Ultimately, the task fell to German director/designer Achim Fryer. The production nearly scuttled the company.

“I understand what people’s aesthetic reservations were about the Ring” …. but I think it was almost all good for us from an institutional point of view.” — Christopher Koelsch, CEO, L.A. Opera

The Ring’s lack of critical and financial success left L.A. Opera so deeply in debt it was forced to reach out to the Los Angeles County Board of Supervisors (which operates the Music Center) for a bailout loan of $14 million, collateralized by $30 million in pledges the company secured from its board members.

I understand what people’s aesthetic reservations were about the Ring,” Koelsch said. “And this will sound slightly perverse, because it obviously was a painful process, but I think it was almost all good for us from an institutional point of view. The investment that this company made to its artistic infrastructure; the improvements to the orchestra under James Conlon; as well the technical innovations, are benefits we are still enjoying. I believe people read into the production a provocative grotesqueness that wasn’t actually there.

“Unfortunately, the Ring left a sour taste in the mouth of the community at large from which we are still emerging. We paid a price for it. And that price was economic and reputational. There is, however, a great deal of pride related to the fact that we pulled that off the way we did, without compromise.”

As Friedrich Nietzsche observed, “That which doesn’t defeat me, makes me stronger.” And L.A .Opera has emerged stronger.

The Director of the Moment

The most recent manifestation of that strength is the adventurous diversity of the 2014-2015 season, including that memorable night on the Santa Monica Pier. It’s a long-term process, Koelsch said, that among other things involves a proposed multiyear relationship with Australian director, Barrie Kosky, whose intriguing double bill pairing Purcell’s baroque opera Dido and Aeneas with Bartók’s Bluebeard’s Castle opened Oct. 25.

It’s been a getting-to-know-you process, Koelsch said, that began last season when he flew to Europe on a friend’s recommendation, and made a spur of the moment decision to substitute Kosky’s silent movie staging of The Magic Flute for the fourth revival of the company’s production designed by Gerald Scarfe.

“Our planning window is much shorter than it used to be,” Koelsch explained. “There are some disadvantages to that, but it does allow us to turn on a dime. There are a lot of great singers in the world and you can put together a terrific cast with 18 months to two years notice. That’s opposed to five or six years for the biggest names. The reality is, it’s a buyer’s market and it allows us to be more responsive in real time.

“There are a lot of great singers in the world and you can put together a terrific cast with 18 months to two years notice …. The reality is, it’s a buyer’s market and it allows us to be more responsive in real time.”

“I think Barrie Kosky is one of the four directors working in the opera world today that I find to be really exciting, even revolutionary. I want L.A. Opera to have a relationship with him that goes on for years.”

Koelsch said he sees L.A. Opera’s upcoming season as a perfect example of the direction the company is going, beginning with the exotic contrast of Dido and Bluebeard. And while many companies (including Long Beach Opera) have presented operas based on Beaumarchais’ Figaro trilogy, few have had the resources to combine John Corigliano’s The Ghosts of Versailles (which incorporates Beaumarchais’ The Guilty Mother) with productions of Mozart’s The Marriage of Figaro and Rossini’s The Barber of Seville. The presentation of the trilogy will be linked to an expansive component the company is calling, “Figaro Unbound: Culture, Power and Revolution at Play” that will take place from Feb. 7 through April 12, 2015.

In the tradition of the Getty Museum’s multi-venue exploration of art in L.A., “Pacific Standard Time,” “Figaro Unbound” will bring together a wide range of organizations including the Hammer Museum, Opera UCLA, A Noise Within, L.A. Theatre Works, FIDM Museum, the Huntington Library, LACMA, the Norton Simon Museum, the Getty Museum, and the Opera League of Los Angeles.

“Figaro Unbound,” Koelsch said, “gives us a chance to explore the contemporary relevance of the plays as they relate to issues such as class and sexual prejudices, revolution, and economic inequality.”

The company had planned to present the world premiere of Daniel Cátan’s Meet John Doe. But sadly, the composer died on April 8, 2011 leaving the work unfinished. Instead the company will present a revival of its production of Cátan’s surreal river voyage opera, Florencia en el Amazonas, inspired by the writings of Gabriel García Márquez. The production will star Chilean soprano Verónica Villarroel in the title role.

“REDCAT offers us an intimate alternative to the Dorothy Chandler Pavilion. It’s smaller, more flexible, and financially less risky. It gives us a chance to reach out to a new audience, one that is more familiar with Radiohead than Mozart.”

As L.A. Opera’s promotional material proclaims, “Buckle your seatbelts for our most offbeat presentation ever!”

Hercules vs. Vampires, Koelsch explained, is an operatic treatment of the 1961 Italian B-movie cult classic, Hercules in the Underworld. Originally directed by Mario Bava, the movie will be screened in its original version accompanied by an operatic soundtrack composed by Patrick Morganelli. The plot follows Hercules on a heroic journey to rescue his beloved from a fiendish mastermind of terror (played onscreen by horror legend Christopher Lee) all in glorious, gaudy Technicolor.

“Bava’s films,” said Koelsch, “have been a major influence on directors like Quentin Tarantino, Martin Scorsese, and Tim Burton. The way we are presenting it is the same way Philip Glass conceived his production of Cocteau’s Beauty and the Beast.”

The season will close on an intimate note when the company moving into the black-box confines of REDCAT to present David T. Little’s apocalyptic 2012 opera, Dog Days.

Critical response to that opera, which was premiered by Portland Opera has been glowing. The Wall Street Journal cited the work as “one of the most exciting new operas of recent years” “It's only a matter of time before this riveting show is confirmed as a groundbreaking American classic,” commented The New York Times.

“Our new association with REDCAT offers us an intimate alternative to the Dorothy Chandler Pavilion. It’s smaller, more flexible, and financially less risky. It gives us a chance to reach out to a new audience, one that is more familiar with Radiohead than Mozart.”