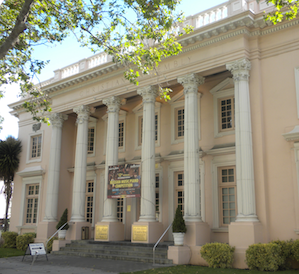 Last summer, we reported on the tribulations of Le Petit Trianon, a small office building in downtown San José whose 380-seat main auditorium is the city’s best facility for chamber and small-orchestra music. The owner, Keith Watt, faced foreclosure due to high interest payments, and it was briefly reported that the venue would be closed and unavailable for concerts, leaving homeless all the local groups that rely on it.

That didn’t happen. The owner filed for bankruptcy to give his organization time to restructure its debts, and the 2012-13 season, which had already been planned, went ahead without any hitches in venue, despite rumors and uncertainties passed around among patrons.

Now it’s time to plan and announce the 2013-2014 season, and where stands the Trianon? Legally, it’s still in bankruptcy proceedings, and expects to remain there for some time. A representative of the owner, with whom I spoke recently, told me that the company is on its planned schedule to liquidate other assets and pay its debts within the bankruptcy court’s guidelines, and that it expects to remain in this status until next spring. Some time ago, the owner announced to its musical tenants that the auditorium would remain open at least until December of this year, and this was recently extended to April 2014. Everyone involved hopes that, if the worst happens and the building does change ownership, the hall would still remain available for concerts.

Consequently, many of the resident ensembles have gone ahead, signed contracts to rent the facility, and announced their upcoming seasons at the venue. The San José Chamber Orchestra has announced a seven-concert season running from October to June, with the expectation that the concerts will be held at Le Petit Trianon. The Mission Chamber Orchestra will be giving four concerts between September and April, featuring pianist Helene Wickett and violinist Tessa Lark among the soloists.

The San Jose Chamber Music Society’s season isn’t on its website yet at this writing, but an announcement mentions six concerts at the Trianon, and tickets are available. It begins on Oct. 25 with the Juilliard Quartet playing Bach, Schubert, and Alban Berg, and concludes with two concerts on April 5 and 6 with the second year of their Beethoven quartet cycle, featuring the Auryn Quartet (the group that had to cancel this year’s appearance due to illness).

The International Russian Music Piano Competition, held annually in June, is also expected to be returning, plus the South Bay Guitar Society and the Choral Project, both of whom perform in a variety of locations including the Trianon.

What’s more, a number of these ensembles have gotten together to begin a new series, of monthly lunchtime concerts on Friday, aimed at workers, students, and residents of downtown San José. The concerts will be held in the small recital hall or the courtyard of the Trianon building. At last notice, the schedule was not yet on the web. The first concert, however, will be on Friday, May 3, featuring the Delphi Piano Trio, which played the Beethoven Triple Concerto with the San José Chamber Orchestra in April.

Heading for the Exit

Unfortunately, not all the resident ensembles are returning this year. Two presenters feel caught between the owner’s reluctance to give out too much detailed information, for fear that this would increase uncertainty, and their own feeling that the lack of information increased uncertainty.

The Ives String Quartet, which has regularly given its concerts twice, once at the Trianon and once at St. Mark’s Church in Palo Alto, found that it was not able to get a long enough time commitment from the Trianon management early enough to plan its season, and is leaving the Trianon for next season, accepting an invitation to play as part of the Old First Concerts in San Francisco. That will be an advantage for listeners in that area; South Bay concertgoers will have to hear the Ives at St. Mark’s or in the house concerts it holds in Palo Alto.

The Steinway Society of the Bay Area appears to be hedging its bets. This group usually holds over half its piano recitals at Le Petit Trianon, with others at the McAfee Center in Saratoga and elsewhere. Its current announcement still lists the Trianon as a venue, but of four concerts out of a prospective seven set for next season, none of them are there. Besides McAfee, it’s using the similarly broad Visual & Performing Arts Center at De Anza College in Cupertino and the small and acoustically dicey Schultz Cultural Arts Hall in Palo Alto.

So while concerts at Le Petit Trianon are continuing, the hall’s future availability is not the most certain. Concertgoers can only hope that its financial and ownership status will settle down soon, so that music-making in San José may sail ahead smoothly.