Have you heard of Pono? It’s the soon-to-be-released, portable high-resolution music player from rock legend Neil Young, and it’s one of many “hi-res” players that are all the buzz. Some months back, the media was flooded with reports of Pono’s Kickstarter campaign, which raised an unprecedented $6.2 million dollars from supporters. That’s a lot of money from people whose enthusiasm for better quality playback via high-resolution sound has led them to endorse Young’s efforts to “rescue an art form” from the throes of sonically degraded MP3s and the limitations of red book CD sound.

You may think that Pono, LH Labs’ forthcoming Geek Wave, and the portable high-resolution players currently available from Astell&Kern are relevant only to young, headphone-toting, pop music diehards. They’re not. Rather, Pono and crew are the market response to demand for higher quality audio at affordable prices.

Consumers are embracing well-recorded high-resolution material because it sounds more analog-like, meaning more natural, like vinyl LPs. (Hence, the vinyl resurgence, which in no small part is a reaction to the sonic degradation of low-resolution MP3.) The higher the resolution, and the finer the recording and mastering engineers, the closer you can get to the heart and soul of the music.

And that’s the point, especially for classical listeners who may have an allegiance to their CD collections, based on uncertainty about new media. High-resolution audio playback is no longer limited to either audiophiles or pre-teenagers who are destined to become hi-tech billionaires. It’s available to everyone with either a conventional sound system or a set of headphones, and a computer or or one of the new portable high-resolution playback devices discussed herein. And these new devices are a snap to use and moderately priced.

The End of the Line for CDs 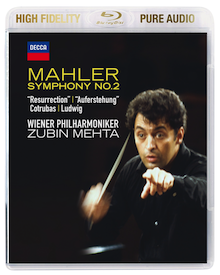 High-resolution recordings are available in both physical and file formats. While super-audio (SACD), the direct stream digital (DSD) format used for San Francisco Symphony’s recordings, has declined in popularity, it has been replaced by Blu-rays, which contain audio up to 24-bit/192kHz high resolution PCM (“pulse code modulation,” the standard means of digital conversion of analog signals in computers). While there’s an ongoing debate over which encoding system, DSD or PCM, has the potential to sound better, there’s no question that both greatly surpass standard redbook CD (16-bit, 44.1kHz PCM) quality. That’s all you really need to know. Because once you hear the difference, all will become clear.

This past spring, Universal Classics finally joined Naxos in releasing new and back catalogue recordings in high-resolution Blu-ray format. The initial batch of releases arrived well over a year after Universal released their ultimate remastering, in both CD and high-resolution Blu-ray format, of the most heralded project from the first decade of stereo, Wagner’s Ring conducted by Sir Georg Solti. Recently, Sony joined the club, releasing a host of reasonably priced home stereo products that are capable of high-resolution audio (HRA) playback.

Every industry insider is aware that CD sales, especially in the United States, are declining, while reliance on Blu-ray, downloads, and streaming services is increasing. With CD-quality streaming due to reach the U.S. in the fall, and high-resolution streaming already surfacing in parts of Europe, the move away from physical media will unquestionably accelerate. Ecologically unfriendly CD and Blu-ray discs, which do not bio-degrade and are not recyclable, probably will never vanish from the scene, but music lovers who do not adapt and begin downloading music will eventually experience a shortage of recordings with music from the composers and artists they love or wish to explore.

PONO intends to establish the largest one-stop download site for classical music available to U.S. residents. It will compete with HDTracks, whose classical collection already encompasses a wide selection of historic and new titles.

Another important site for classical music downloads is NativeDSD.com, founded by Jared Sacks of Channel Classics, which follows Acoustic Sounds’ SuperHiRez in offering recordings not only in high-resolution DSD (1-bit, 2822.4kHz) format, but also in 24-bit formats that include 192kHz, 96kHz, and 44.1kHz. Yet other sites include iTrax and ProStudioMasters.

Lovers of historic instrumental and vocal recordings can avail themselves of the many high-resolution remasterings from Pristine Classical. Their 24-bit “Ambient Stereo” remastering of Roger Désormière’s famed 1941 recording of Debussy’s Pelléas et Melisande is astonishingly better than EMI’s CD version.

These sites and offerings are but a hint of what is to come, very soon. And that’s because playback has become simple and much cheaper than it used to be.

Playback is Simple: A Guide to What You Need 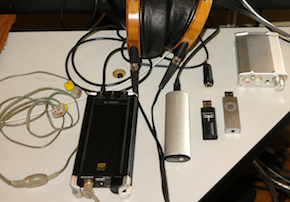 For playback of physical media, multi-format machines from Oppo can play not only “hi-res” SACD and Blu-ray (in both pure audio and video configurations), but also play high-resolution digital files via the USB output from your computer. And they all have volume controls.

Sony, too, has a host of players. For file playback, we audiophiles are most excited about Sony’s HAP-Z1ES whose capacity to both serve as music server/file storage device, and upgrade the quality of music files to double DSD led Jon Iverson at Stereophile to declare it “an integrated single-box player that is of the highest sonic quality… It also has the potential to become a gateway product for the mass market of portable-player users.”

The major sonic limitation of every portable device — which includes standard resolution iPods, iPhones, iPads, the panoply of Androids, and laptops — is the quality of both its built-in digital-to-audio converter (DAC), and of the headphones or iDock used for listening. Portable players from Pono, Astell&Kern, and LH Labs/Geek address the DAC issue via high-quality playback hardware that makes built-in laptops and mass-market portable players sound laughable.

When it comes to headphones, whatever you do, do not limit yourself to either the white earbuds that come standard with Apple products or the Beats By Dr. Dre headphones that dominate the youth market. Both are inferior. If you want to go whole hog in the over-ear headphone department, many in the know feel you can do no better than the planar magnetic models from Audeze.

In auditioning the simple-to-use, game-changing, plug-and-play computer audio devices discussed below, I used a loaner pair of Audeze LCD-2 headphones. As wonderful as they sounded straight out of the box, their sound improved immensely when I exchanged their stock headphone cables for a loaner pair of Nordost’s Heimdall 2 headphone cables. Midrange became warmer and more luxurious, and bass noticeably deepened.

If your computer is equipped with iTunes, you can get much, much better sound by upgrading your playback software. JRiver for PC and Mac or Audirvana Plus, Pure Music, and Sonic Studio’s Amarra for Mac all play high-resolution audio, and sound markedly superior to iTunes. Amarra’s latest version, due imminently, also includes DSP (digital signal processing) software that immensely improves bass response when computers are hooked up to loudspeakers.

To obtain portable players, headphones, and some of the products discussed below, check out your local high-end/ high performance audio outlet. Those with which I’m most familiar include, in the South Bay, Audio High; in San Francisco, Music Lovers Audio, Audio Vision San Francisco, Elite Audio Systems, and Tone of Music Audio; in Berkeley, Music Lovers Audio; and in Oakland and Walnut Creek, Pro Home Systems.

Here’s the new thing: low-cost, compact, all-in-one plug-in DAC headphone/amps for computer download files. In 2013, AudioQuest, one of the leading brands of high performance audio cabling, in the world released their DragonFly. A USB DAC plus preamp plus headphone amp, virtually identical in dimensions to many USB sticks, the DragonFly bypasses your computer’s built-in DAC and outputs high-resolution audio via its mini-plug receptacle. Even a standard CD, inserted into your computer and played through this device, sounds markedly superior to one played through your computer’s built-in DAC. The DragonFly 1.2 outputs up to 24-bit/96kHz audio and costs $149.

Since then, a number of other high-performance audio companies have released competing products, all of which cost $189 and up. A simple miniplug-to-RCA adapter allows these USB DACs to output to a standard audio system.

Audioengine’s plug-and-play D3 costs $189. Virtually the same size as the Audioquest DragonFly, it’s just as convenient, sounds better, and plays files up to 24/192. Its major limitation is that it takes 24/176.4 files and samples them at 24/96. As a result, the sound of many high-resolution releases is diminished.

The larger, battery-powered ifi Nano lists for an astounding $199. Not only does it sound much better than the Audioquest DragonFly 1.2, but it also plays multiple hi-resolution formats, including 24/192 PCM, DSD, and DXD. That’s more than any of the other devices discussed herein. You just plug it in via the supplied USB cable, stick your headphone cable into its mini-plug output, adjust its volume knob, and away you go. (The better the USB cable, the better the sound.) If you want to play music on a sound system rather than headphones, you won’t even need an adapter, because the Nano also includes RCA outputs.

Although limited to 24/192, the Meridian Explorer ($299) sounds extraordinary for the price. Its one sonic limitation is that its connector cable is a stock USB mini to USB Type A, which means that you currently can’t upgrade to a better USB cable. When I used the ifi Nano with an upgraded USB cable from Transparent Audio (which, to be honest, costs as much as three ifi Nanos), it took the lead. But if you only have stock cables, and you’re not listening to DSD or DXD files, the Meridian Explorer is a top contender.

Then there’s LH Labs’ Geek Out 1000 DAC/headphone amplifier ($299). It’s bigger than the plug-and-play USB DACs from Audioquest and Audioengine, yet considerably smaller than the ifi Nano, and it plugs directly into your computer’s USB port. No cables necessary. In addition, it can handle virtually every high-resolution audio format you can throw at it.

Last but not least, the biggest of the lot, Sony’s HPA-2 headphone amplifier has mini-plug outputs for both headphones and audio systems. It also has separate dedicated inputs for computer USB, iPhone/iPad/IPod, and Walkman, and and outputs up to 24/192 or DSD. Computer input is accomplished by its supplied mini-USB to USB cable, which again means, until someone makes them with those terminations, no cabling upgrades. While it lists for $499, you can get it for close to $299 if you shop around. The sound is excellent.

In a comparison of all these devices, at least one of my audiophie friends, who also happens to be a Peabody-trained classical cellist, favored the sound of the ifi Nano. Even with a stock USB cable, he found its revealing detail and clarity of attack superior to what he heard from the more expensive products from LH Labs and Sony. (He did not hear the excellent Meridian Explorer, which I had to return before completing listening comparisons.) For size, portability and versatility, however, the LH Labs Geek Out 1000 is hard to beat.

The reign of the CD, with its dependence on sonically-limited physical media, is fast coming to an end. It’s past time for classical music lovers to take advantage of both high-resolution Blu-ray Pure Audio media and easy to download and store high-resolution music files. With the availablity of new, simple-to-use, relatively affordable playback devices, the last barriers to enjoying lifelike, high-quality audio reproduction without pain are quickly coming down.

[Also, see the previous article in this series, Sound Matters: Classical Into the Download Era.]