When the New York City Opera collapsed in September there seemed no end of reasons and plenty of blame to go around. Various opinion pieces placed the blame on the recession, on board members for various sins, on management for shortsighted decision-making, declines in artistic quality and relevance; and on the all-purpose excuse, declining audiences for classical music. 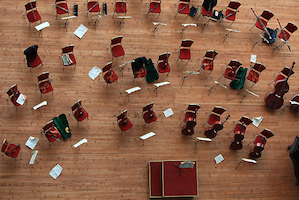 At roughly the same time, the Brooklyn Philharmonic, which had already cancelled two seasons since the beginning of the 2008 recession, cancelled its 2013-2014 season, and in November was struggling to stave off bankruptcy proceedings. Though it didn’t make headlines, the orchestra was certainly not stuck in the mud; its most recent principal conductor was Alan Pierson, founder of the new music group Alarm Will Sound. It was bringing its concert series to venues in different parts of Brooklyn. Again, reporters seeking reasons briefly touched on all of the same culprits as (above) in the NYCO story.

But there is one problem that unites these two stories and others nationwide that is rarely investigated because it goes to the root of the way in which we have chosen to fund the arts in the United States: the problem of scarcity of resources.

You would think, given New York City’s enormous population and its unprecedented concentration of wealth, that well-established cultural institutions would be able to survive, even in a severe economic downturn. That they couldn’t is a lesson about the underlying system, not just about individual organizations.

The present funding of arts organizations depends on leveraging foundation and grant money (which bring some recognition with them) to solicit individual donations from wealthy patrons. The organizations that can be most successful here are the largest, because they can employ people to take charge of development. Smaller groups compete over a smaller set of patrons, and they usually don’t have the staff to sustain development drives and identify new, big donors.

In effect, smaller arts organizations are on a constant treadmill, in which a long record of artistic and financial success gets you no further ahead: Competition with other organizations for a scarce, shared pool of donors will only increase. Growth, under these circumstances, is unlikely, unless a much larger audience were suddenly to materialize.

Large organizations can get into troubles of their own, of course; they still have to take care of business. But they have resources they can tap. During the recession, the Metropolitan Opera took in several large, bottom-line saving donations: $7.5 million from a Scottish widow in 2009, $30 million from Ann Ziff in 2010. A fraction of that gift would have saved the NYCO, but they were never in the running. So the NYCO was in the unusual position of having many of the disadvantages of a larger company — expensive theater rent, restrictive contracts, overhead costs — but few of the advantages. A major reason it failed was that even its supporters realized the impossibility of its dilemma. Similarly, the Brooklyn Philharmonic, sporting many of the ideas that smart thinkers have identified as antidotes to audience apathy for classical music, never had the chance to get back on its feet, despite a well-established educational program, and 60 years of recognized achievement.

When writers mention Gotham Chamber Opera, currently a highly prized but small organization, as a possible successor to NYCO, the group itself sounds distinctly unenthused. Can you blame them? Expansion would just mean running that much harder, with no reward in view. And even in New York City, few viable paths to expansion exist.

When people say they don’t want their federal tax dollars going to opera companies or orchestras, I think, “You mean your tenth of a cent?”

Understandably, arts managers in the U.S. are reluctant to criticize the system. Many of them look at the European, state-funding mechanism as a horror show of government regulation and submission to bureaucrats. Others worry that a significant arts subsidy would just become a target in the giant game of chicken that is currently being played by the political parties in Washington. My feeling, for what it’s worth, is that increased state and federal arts funding would produce tangible benefits and wouldn’t turn us all into European socialists. When people say they don’t want their federal tax dollars going to opera companies or orchestras, I think, “You mean your tenth of a cent?”

Regardless of where you come down on that issue, however, we have to recognize that American arts funding has resulted in a terrible case of arts anemia: We have an overabundance of small, interesting, entrepreneurial but undercapitalized organizations that live hand-to-mouth, but we have no way of taking the truly excellent out of the rat race and allowing them to flourish to the extent they are capable. We can maintain far fewer large-to-middle scale arts organizations in our major population centers than those that are supported in comparable cities in Europe. And for too many U.S. arts organizations, “stability” means just scraping by to the next anniversary year.

Americans love innovation and startup companies; it’s no surprise that our arts scene breathes the same atmosphere. We do an extraordinary job of identifying homegrown compositional talent, for example. We recognize initiative in the arts. We just don’t reward it with the one thing that artists and organizations alike crave: relief from the scarcity treadmill. The small stay small and the challenge remains the same.