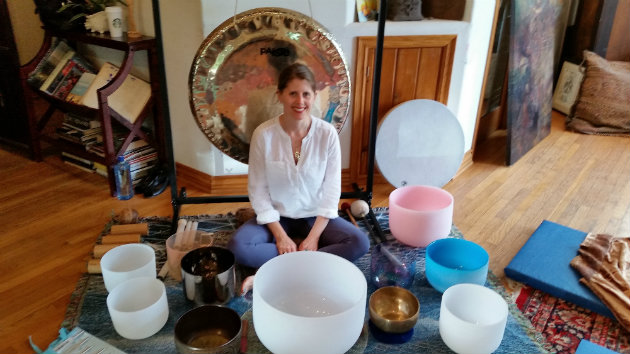 A gentle breeze flows through the spacious living room of Leigh and Carla McCloskey’s hillside home in Malibu. The mood is tranquil by design with people lying on mats or comfortably seated on several soft couches. A series of pure, glistening tones fill the room produced from a set of ancient instruments known as “Tibetan singing bowls,” instruments long associated with prayer and meditation. Then, as the crystalline tones produced by the bowls overlay one another, sound-healer Helane Anderson adds her lyrical soprano voice.

The “Sound Bath” (which Anderson says is varied and improvised to fit the moment and the physical sensations within the room) lasts approximately an hour resulting in a deep sense of serenity. As the final notes fade into silence, Anderson asks if everyone is experiencing a sensation of having becoming “rooted,” as if their bodies were melting into the floor. And I have.

Anderson is part of a new musical healing movement (based on ancient practices). She is one of a growing number of classically trained musicians who are finding in Sound Healing a different pathway of musical expression. She recently collaborated with composer Anna Drubich on a piece for cello, timpani, singing bowls, and chamber orchestra. She has also released a first live-performance CD, Elemental Alchemy recorded in March, 2015, in Ojai, CA. It features Anderson singing and performing with singing bowls and temple chimes. There are also tracks that introduce the violin artistry of Ben Powell. But Anderson carefully distinguishes between her classical and Sound Healing training. "The sound itself accesses parts of the brain and produces alpha, delta, and theta waves, which are the brain waves associated with high-level meditation." - Helane Anderson

“Classical music exists in the tonal system,” Anderson explains. “Sound Healing exists in the microtonal world. The traditional instruments of the Eastern religions incorporate these multiple tonalities. The sound itself accesses parts of the brain and produces alpha, delta, and theta waves, which are the brain waves associated with high-level meditation. The sound, in a way, allows the brain to shut off, which is something we have a great deal of trouble with in our modern day lives.”

“I hate the term ‘New Age Music.’ The irony is that it’s not ‘new age’ at all, it’s old age. The most ancient forms of healing involved sound, whether it was group chanting or a mother singing a lullaby to a baby. The combination of music and healing has been around from the beginning of time.”

She will be joining many other practitioners of Sound Healing in the Bay Area from September 11-14 as part of the 5th International Globe Sound Healing Conference. The event’s schedule of lectures, workshops, seminars, and musical performances will feature 40 of the field’s top researchers, musicians, doctors and sound therapists. 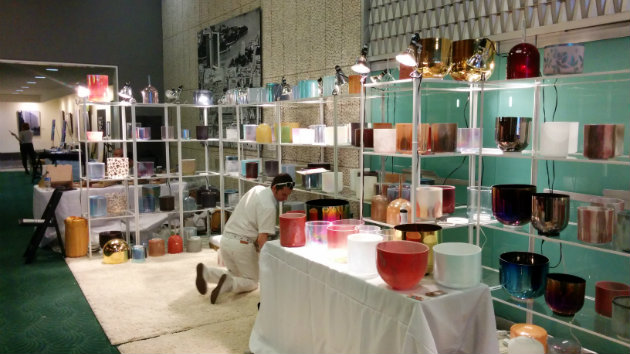 The conference, presented at the Kaiser Tower in Oakland, is being organized by the Globe Institute of Sound and Consciousness in San Francisco. The goal of the conference, says founder David Gibson, is to provide a forum for the dissemination of techniques and information; provide experiential exercises; further public knowledge of the field of sound healing; and act as a venue where sound practitioners, the public, and the medical community can meet.

“We first presented the conference in 2007, and it has grown every year,” says Gibson. “But it’s not just the success of the conference, the whole field of Sound Healing has grown tremendously. There are sound healing clinics in many hospitals now. It’s entered the mainstream.” The list of conference speakers, musicians and workshop leaders is here.

And then there is Anderson, a woman whose family and professional background would appear to be anything but tantric.

A child of northern Wisconsin, Anderson grew up in a household where the family trade was rendering slaughterhouse byproducts, the living room piano was a piece of furniture that no one played, and the mantelpiece was lined with trophies for polka dancing.

“My parents hated piano lessons,” Anderson recalls. “So they swore when they had kids they were never going to force them to learn to play the piano. The only time the piano got played was when my uncle would come over and bang out The Beer Barrel Polka!”

While the piano lay dormant, Anderson discovered a love for singing, a love she would sometimes unabashedly display to total strangers. “I would walk up to people in the grocery store and ask if I could sing and dance for them. My mother would get embarrassed. But most people liked it.” - Helane Anderson

“I would walk up to people in the grocery store and ask if I could sing and dance for them. My mother would get embarrassed. But most people liked it.”

Over time, that poor, neglected piano, like a magnetic field, began to attract Anderson’s attention. “When I was 10, I told my parents they could keep my allowance if I could take piano lessons.”

Anderson’s rapidly evolving piano skill led to a B.M. degree in piano performance from Salem College in North Carolina. But like many a young pianist, the reality sank in that she was not destined for superstardom.

“I resigned myself to the reality that I was never going to be a concert pianist, that I would probably end up teaching piano in some small college in the middle of nowhere.”

She refocused her goals and received a Masters in Arts Administration from Indiana University. It was during this time, Anderson says, that she had her first real exposure to Eastern music, which was a featured element of the university’s renowned Tibetan Center (a frequent stopover for the Dalai Lama).

Diploma in hand, Anderson moved to New York where she found work in music management and public relations, and spent five years with the music firm of Boosey & Hawkes.

It was eight years ago, following the death of her father, she was offered the position of Artistic Administrator of the Los Angeles Philharmonic. It was a move that changed more than Anderson’s geographical location.

“In New York I was never able to tap into my spiritual side,” she explains. “New York is a head-oriented place. L.A. lends itself to a sense of spiritual openness.”

Anderson left the 24/7 world of arts management behind and began an intensive study sound healing, polarity, and cranial-sacral therapy. She took numerous classes and started collecting Tibetan singing bowls. She combined the singing bowls with her own vocalizing, and the result was her own personal interpretation of the Sound Bath, which is what I experienced that evening in Malibu.

“Sound Healing is not a very snappy name,” she says, her former PR-self coming to the fore. “But that’s what it is. Sound Healing is an all-encompassing term that takes in many different forms. Sound is physical matter. What happens in Sound Healing is the use of musical vibrations that penetrate the body, not in a cerebral way, but in a way that takes music to a whole different level of experience.”

“I understand the use of the word performance in relation to sound healing, especially for musicians like myself that have a classical background,” Anderson says. “But I don’t perceive what I do as a performance. I perceive it as the transmitting of energy through sound. And what happens within that space and the moment is different every time. If somebody told me seven years ago this is what I would be doing, I’d be laughing.”

For a complete schedule of workshops, lectures and performances and ordering tickets: soundhealingcenter.com/LoveConf/workshops.html.