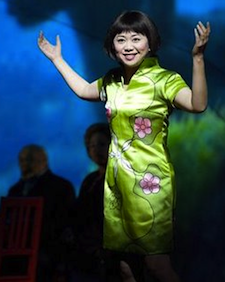 Mezzo-soprano Zheng Cao, 46, whose nationally publicized fight against cancer was as inspiring as her vibrant singing, has died. Resting at home, Cao bid farewell to the life she loved so much on February 21, surrounded by her husband, oncologist David Larson, M.D., as well as her mother, father, and a circle of devoted friends and admirers that included mezzo-soprano Frederica von Stade, composer Jake Heggie, cellist Emil Miland, author Amy Tan, and soprano Nicolle Foland.

Born in Shanghai on July 9, 1966, Cao participated in San Fracnsico Opera’s Merola Opera Program in the summer of 1994. Recognized for her gifts, she spent the next two years as an Adler Fellow. From there she undertook a succession of roles, both at home and abroad, that included, in San Francisco, as Siebel (Faust), Idamante (Idomeneo) Baba the Turk (The Rake’s Progress).

For as many times as she bubbled around the stage as Mozart’s love-stricken adolescent, Cherubino, she tore people’s hearts in two with her immensely sympathetic Suzuki (Madama Butterfly). One of her most moving appearances was as the lead in the 2008 San Francisco Opera world premiere of Stewart Wallace’s The Bonesetter’s Daughter, based on Tan’s novel. More recently, in December 2011, she sang “You’ll Never Walk Alone” at the December 2011 gala tribute to her mentor and friend, von Stade. 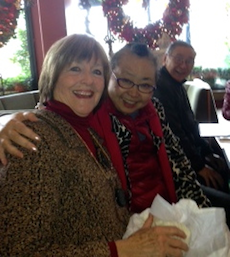 Around the same time as she was triumphing The Bonesetter’s Daughter, the onset of pain led to a diagnosis of stage four cancer. The cancer was in her lungs, brain, and spread throughout her body. Miraculously, Cao’s tumors either disappeared entirely or shrank as, in the process of treatment, she fell in love with her oncologist, Larson, and her spirit soared as freely as her voice. But while devoting herself to publicizing her struggle and rallying support for the fight against cancer, the disease progressed.

In February 2012, Cao bravely appeared at an event that established the Merola Opera Program Zheng Cao Opera Fund. The fund annually sponsors an incoming Merola artist, either a mezzo-soprano or someone of Asian/Pacific ancestry. Then she continued to live every day fully. After a good day on February 20 of this year, her husband noticed that her breathing had changed. As friends and family converged to say goodbye, Cao, who never regained consciousness, was treated to a chorus of Cherubino’s “Voi che sapete,” another of “Somewhere Over the Rainbow,” Miland’s performance of Bach’s Prelude and Sarabande from the Suite in G, and other performances by Adler Fellows Ao Li and Joo Won Kang.

“We also listened to her recordings as well as Flicka’s,” reports Foland. As Cao’s fellow Merolini and Adler Fellow, she become one of her closest friends and, along with her family, one of her main caregivers. Von Stade reports that Foland’s devotion in caring for her friend was extraordinary.

“It was the biggest privilege and gift of my life to go on this journey with her, and an honor to help usher her out of her life in the same room with all those people who loved her,” says Foland. “She exited exactly as she wanted to, just like she lived her life.” “The house flooded up with love,” says Miland. “So many colleagues and friends came over. We were holding her hand, loving her. She was so incredible to let us love her to the very end of it all. What a gift that is! God Bless her.”

As with Foland, Miland first met Cao in the Merola Opera Program. He and Heggie then played for her Schwabacher Debut Recital. Years after her former partner of 10 years, actor Troy Donahue, died of a heart attack, she gave Miland a pair of his shoes. These became his special performing shoes, which he wore at Carnegie Hall when he accompanied von Stade, and proudly pointed to whenever he saw Cao. Cao, in turn, performed Cherubino in shoes whose buckles were a gift from von Stade. And she also had the joy of recording Heggie’s song cycle, Deepest Desire, on Flesh and Stone: Songs of Jake Heggie, a benefit CD for Classical Action. It was a true circle of friendship.

“Her relationship was Donahue was before the miracle of David Larson,” says Miland. “The last four years of her life, they shared a love story that I will always be grateful to have witnessed, because it was one of the best.

“She really was something else. She had such a joy of singing. When she’d walk on a stage, no matter where it was, it was evident that she was so happy to be there, sharing her gift. She was really good at celebrating the best we have as humans. And she was so generous in allowing us to share her journey.”

SFO General Director David Gockley was also deeply impressed with Cao. In a statement he sent to his colleagues, he writes, “Zheng was an extraordinary woman in so many ways, filled with so many talents. I believe her biggest success was her ability to infuse everything in life with such joy and fun, and a heartfelt honesty that touched everyone she encountered. She will be deeply missed.”

Von Stade (Flicka), Cao’s dear friend — she called her Zhengie — performed with her at many fund-raisers and galas. She especially recalls with fondness the Chinese/French version of the Habañera from Carmen that they sang at one of the outdoor parks. Reached at her home after spending the evening her Cao’s mother and father, sister Dan (who flew in from Shanghai), and devoted husband, David, she spoke of the love Cao generated with her voice and being.

“Zheng was such a shining light. I think one person comes along like that, not just in a decade, but in a century. Her innate generosity, honest,y and enthusiasm were extraordinary. She would walk down the street and she’d be a magnet. Always that smile, always that generosity. Even in all the commotion of her illness she went out to buy Christmas presents. My husband Mike hasn’t taken off the vest she gave him since Christmas.

“She also had one of the most beautiful voices I have heard in my life. The creamy, golden quality was extraordinary, with a sound that was somewhere between Christa Ludwig and Janet Baker. It was also a voice of great pathos and great conviction, and it expressed everything about her. No matter what and where she sang, even at a party, she meant every bit of it. And she had the most beautiful, expressive hands that moved naturally as she performed. You got a whole soul in everything she sang.”

You are invited to share your memories and photos of Zheng Cao on a new Facebook page. Both that page and this tribute will eventually include information about a memorial celebration of her life.