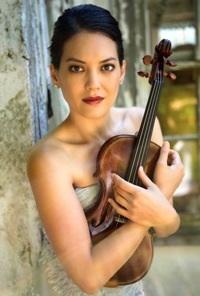 In her 33-year career as a professional violinist, Anne Akiko Meyers, now 40 years old, has amassed a unique resumé that includes a debut with the New York Philharmonic at age 12 and recent tours with the pop vocal group Il Divo and trumpeter Chris Botti. Shortly before she launches her new CD, titled Seasons ... Dreams, with an Oct. 4 concert at Yoshi’s San Francisco, she discussed with SFCV her childhood launch on The Tonight Show, her love of the old and embrace of the new, and her curious mix of the supremely poised with the startlingly off-kilter. And she does all this on the “Royal Spanish” Stradivarius, of 1730, that once belonged to the King of Spain.

You made your debut at age 11?

I was the leader of a string quartet called Angels Ensemble of California. We were all little angels with our white, knee-high socks on [laughs]. I was studying with Alice Schoenfeld at the Colburn School of Performing Arts.

It was sure super-exciting. I remember standing behind the curtain [at The Tonight Show], waiting to go on national TV, and how Johnny Carson made all of us feel very comfortable and welcome. It’s very rare today to see any children playing an instrument on national TV.

We were asked back a second and even a third time, but by the third time, I had moved on to Indiana to study with Joseph Gingold. I actually turned down The Tonight Show, which I just cannot believe today. I want to absolutely pinch myself over that.

You were how old when you turned down your third appearance?

Well, there you go.

Has your embrace of people like Wynton Marsalis, who has just written a cadenza for a Mozart violin concerto for you; Il Divo; and Chris Botti somehow worked against you in the classical market? What’s happening with the arc of your career?


I don’t think it has hurt me in the least. It’s something I truly embrace as an artist. I love diversity of all kinds. Ever since I was little, I’ve always looked for strange repertoire that is not overplayed or hackneyed to death. Even my first recording contained the Barber Violin Concerto, which at that time [1988] was rarely played.

I think my philosophy has been to always stay on a very determined path, and to always have my projects be dictated by the repertoire choices. That I have been able to work with Wynton Marsalis, Chris Botti, and Il Divo is almost like cream on the cake. It’s so delicious, and so deliciously different than the norm, that I embrace that, as well as playing Mendelssohn with the Hiroshima Symphony.

I constantly play the traditional repertoire. But in order for that to stay alive for me, in my heart and in my mind, I really always need new projects and new music to thrive by.

I just look back in history and think, What if I was around when Maurice Ravel was alive? I would just be bugging the crap out of him to write a violin concerto. Or George Gershwin. There are so many incredible composers out there today that I really want to track down and listen to. If their music moves me on a really deep level, I wonder if maybe they haven’t explored the violin language, which is usually the case.

It’s a question you have to put to them: Would you be interested in writing something for me? The answer is usually, “Yes. Very much so.”

It happened with Wynton Marsalis, too. Who would have thought that he would be interested in writing cadenzas for the Mozart Violin Concerto? He leaped at the opportunity. It’s really exciting when you think of the different artists and composers out there that could fuse new life into old pieces. I love to constantly discover new works, or to ask composers to arrange works for me. That’s the grounds for rediscovery as an artist.

Your repertoire for your new album, Seasons ... Dreams, is very interesting. You’ve got Beethoven’s Spring Sonata, Debussy, and Vivaldi, but you’ve also got [Alfred] Schnittke, Gershwin, and [Vernon] Duke.

It all germinated from the idea that I wanted to explore the audience falling into a dream. Once you’re kind of comatose and dreaming, you experience the seasons. So, it was interesting to try to find repertoire that aligned with the seasons without it being Vivaldi’s Four Seasons. Instead, the anchor of the album ended up being the Beethoven.

I thought of playing other recordings of the Spring Sonata and doing a comparison. But you do it so well that I didn’t feel the need to listen to any other versions.

Thank you very much. At the end of the album, you’ve come out of the dream and the mysterious place you journeyed to. It’s time for your cappuccino, and hopefully the day is good [laughs].

Actually, I quit caffeine when I had my daughter. I couldn’t believe it. I was a latte-a-day drinker. It’s so bizarre. I don’t even know who I am!

Has giving it up affected your playing at all?

Being pregnant affected my playing. My belly got so big that my bow would crash into my belly regularly. That wasn’t too fun. But the vibrations of the music cascading over her were really interesting. When I watch my now-three-month-old while I practice in front of her, she really listens. And my priorities have definitely shifted: “Hurry. Practice. Ten minutes is good enough. Gotta go pick up the spit,” or whatever.

Is she traveling with you?

She is. This is a pretty long tour we’re on right now. She’s there for every concert, and hubby travels with us, as well. I’m very, very lucky.

The off-kilter Schnittke take on Silent Night is so weird, coming after all the sweet music on the rest of the CD. Do you have a certain demonic side?

I do. You really do understand my playing.

I love that piece. You’ve got to have some bad in order to appreciate the good, and that piece is really sort of bad-ass. Audiences really love its really wild spin on Silent Night. The violin at the very end is sort of like a music box dying out. I actually uncoil the G string until you can’t hear a tone anymore. It’s so original without trying hard. For five minutes of music on Silent Night, it’s very profound.

Last week I interviewed Danielle de Niese, who’s also from Los Angeles. How come you don’t have a Valley Girl accent like she does?

I can do Valley Girl if you wish.