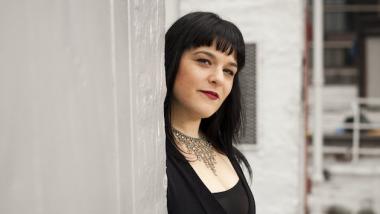 The Wall Street Journal dubbed her a “modern-day Diaghilev,” while Opera News’ Henry Stewart wrote that, “more than any other figure in the opera industry, Beth Morrison has helped propel the art form into the 21st century.” Indeed, Morrison, a producer of opera theater extraordinaire, and her company Beth Morrison Projects (BMP), founded in 2005, has been the powerhouse behind numerous world premieres. Included are David T. Little’s Dog Days (2012), Du Yun’s Pulitzer Prize-winning Angel’s Bone (2016) and Missy Mazzoli’s first full-length opera, Breaking the Waves (2016), a co-commission of Opera Philadelphia and BMP.

Morrison, who grew up in Auburn, Maine, performed in community theater musicals each year with her family, so it was no surprise that, at 17, Morrison auditioned for — and was admitted to — Boston University’s Tanglewood Institute. It was there that she began focusing on classical music. After receiving an undergraduate degree in vocal performance from Boston University and a master’s in vocal pedagogy at Arizona State University, Morrison became a voice teacher at the Tanglewood Institute, going on to become its director in 1999 at the tender age of 26.

Realizing she preferred working behind the scenes as opposed to treading the boards herself, Morrison enrolled in the Yale University School of Drama, learning the nuts and bolts of theatrical production and management. Eventually deciding that her true calling was to develop works from the ground up, Morrison founded BMP.

In 2013, BMP and HERE Arts Center (Kristin Marting and Kim Whitener) cofounded the Prototype Festival, a showcase for contemporary opera-theater and music-theater projects, with The New York Times’ Zachary Woolfe describing the characteristic Prototype work as “short in length and grim in subject matter.” Always on the lookout for new talent, in 2018 Morrison created BMP: Next Generation, a competition for early career composers.

And since theaters have been shuttered, BMP is offering an “Opera of the Week,” which streams on the organization’s website for one week every Thursday at noon. I spoke with the impressaria by phone from her home in New York about her philosophy, her passions, and creating art in the time of COVID-19.

With this devastating virus affecting all of us, I need to know how you’ve been coping and what have these last few months been like for you?

It is a little bananas, but there’s actually a lot of good in this moment, too, so I’m trying to focus on that now. We’ve come to such a catastrophic moment and Beth Morrison Projects was hit particularly hard. Because of our business model, we had 10 tours this spring [that were] all canceled. It’s a staggering loss of income for us — over one third for the year — in a period of two months. But we’ve come through the triage of everything and the chaos of the moment and are now pointing ourselves toward the future. I have to say, there’s a lot of good we could seek from this moment, so we’ll see how that turns out.

You opted out of a more establishment career — teaching voice at a university and running the Tanglewood Institute — but what gave you the confidence to strike out on your own as a producer of new operas?

Tanglewood gave me the chance to run something and have a vision of something much larger than myself as a performer. That was exciting. But after several years, I was feeling frustrated and disconnected with what I was seeing in opera at that time — that it wasn’t relevant to a young person and our contemporary world. I felt that what I was seeing in theater at that time was exciting to me and I wasn’t seeing that same thing in opera.

I started having a lot of thoughts. What would happen if I took the avant-garde theater aesthetic that I love and put it into opera? What would it mean if I were telling the stories of our time and it would be all new compositions? It was the beginning of my thinking to form a production company. I had no idea how to do it, so I went to the Yale School of Drama with the express purpose of founding my company. My last year of school I was working on my business plan, so I moved to New York and started BMP in 2005. The company was founded for living composers — to tell the stories of our time in the most theatrical way possible.

The roster of new creations that you’ve produced continues to grow. You’ve worked with David Lang and Mark Dion in Anatomy Theater, a 2016 opus about a murderess who is executed and publicly dissected, and in 2017 you produced Paola Prestini and Rinde Eckert’s hybrid theatrical fable, Aging Magician, about an eccentric clockmaker. Then in January of this year, you produced the world premiere of Blood Moon, by composer Garrett Fisher with a libretto by Ellen McLaughlin that was inspired by the Japanese percussion style taiko. What attracts you to a work, what are your criteria, and how do you know if it will have legs?

Everything for me starts with the composer. I’m interested in composers who are wholly unique to themselves, that they have a sound and the capacity of building sound worlds that are dramatic. They have innate instincts of how to write theater. I have my own personal tastes, in terms of style, but essentially those are the criteria. In terms of subject matter, I’m always looking for projects that connect to this moment, to socially conscious topics, to things that are relevant, both musically and subject-wise.

In terms of how do I know if something’s going to work? You don’t, but what you hope is that you put together the right team to create something. I have enormous trust in the artists I choose to work with. I want them to allow their imaginations to take them to whatever places they should go and it’s up to me to bring the team around it and shape it and make sure it will be a success. I don’t think there’s ever been a project that hasn’t been successful, but that doesn’t mean it was perfect from off the page. You have to go through a process of workshopping that is intensive in order to make sure they’re not going to fail.

I want artists to have flexibility, the freedom to come into the process where they have the ability to fail, which means they have the ability to take risks. Allowing risk-taking is the most important part of the process. Nothing great is made without risk. BMP is always interested in breaking new ground — of giving the artist space where they can experiment. There might be failure in a certain moment, but it’s not failure, it’s learning and we take it and move on to the next step.

Would you say that there’s some sort of operatic divide between the traditional and the works you’re producing?

I don’t think there is a divide. We’re all telling stories through music and theater and through the voice. We’re all doing vocal theater at the highest level. We’re all connected, we’re all part of the same food chain. What’s happening in one company may be different, but we’re all going for the same thing — to move audiences, to connect with audiences, to share stories and what we have to bring into this beautiful art form, whether they’re written today or were written in 1600.

With BMP now a known quantity, is it getting any easier for you to produce new works?

Nothing’s easy about producing opera. Nothing at all. It’s expensive, it’s challenging, everything about it is hard — whether it’s new work or of the canon — it’s certainly not getting easier.

Do you think that opera is moving away from the larger houses into smaller venues and if so, why?

I don’t know if it’s moving away from large stages as much as it’s expanding out to other kinds of spaces. My sincere hope is that the large companies like the Met, LA Opera, Chicago, San Francisco Opera, Houston — that all of those companies are going to continue to do what they do on their main stages, both in the realm of repertory and the realm of new work, but that they also expand into working in the chamber-opera realm. There’s so much being written and it’s much more affordable. It connects to audiences in a different way and it’s a much more intimate experience for the audience.

When I started this black box opera movement with BMP and Prototype, I remember the first year [The New York Times’] Anthony Tommasini came to review Mohammad Fairouz’s Sumeida’s Song, at Here Arts Center [in 2013], which had 125 seats. He was so enamored with the fact that he was so on top of the singers. At that time, it was novel, but it’s not novel any more. I’ll never forget that review. That experience, while not unique anymore but is ubiquitous, quite frankly, it really does give the audience a much more intimate relationship with the work being made. We’re moving further into that with pieces that are immersive with audience interaction, that we’re just at the tip of the iceberg on what’s possible.

This moment where everybody’s turning to the digital realm is going to create a lot of innovation and creativity in ways that maybe we couldn’t have foreseen. I’m excited about that and for BMP to be at the forefront of that and for artists to expand their footprints in different ways and for us to help make those things possible. I feel optimistic about the future of the form. There will be less companies that can do the big mainstage work, but I hope they will always exist and can be found and as things become more challenging financially, that these smaller projects are seen as just as viable.

How would you describe your relationship with LA Opera, and would you ever want to be a director of an established opera company?

My relationship with LAO is the most important relationship for us. It grounds our West Coast work. We’ve done nine projects with them and it’s an ongoing partnership. We have enormous respect for each other. They let us do what we do best — develop and produce contemporary chamber opera. I have huge respect for the leadership of that company. Christopher Koelsch leads with integrity and honesty and is somebody who I think has found a way to balance what it means to be a 21st-century opera company of that scale.

I think his vision is true and sound and he’s a good friend. And not just him, but the administrators of that organization are extremely talented at what they do and they are really great humans as well as being great colleagues. Would I want to run a large company like that? Maybe, because who knows what the future brings.

Soprano Sara LeMesh is extraordinary in this gripping production of Missy Mazzoli’s adaptation of the Lars von Trier film.

It’s hard to come to grips with the new opera presented by L.A. Opera, which may be part of the point.