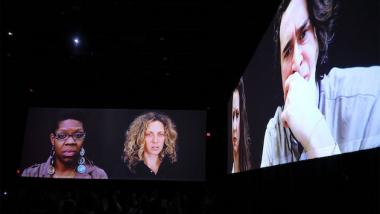 Someday someone may compose a dramatically powerful, politically provocative opera about Private Bradley/Chelsea Manning. It could focus on his abusive childhood, emerging homosexuality, and issues with gender identification. It could illustrate the genius he had with computers that led to his military assignment as an intelligence analyst in Iraq. It could explore the illicit online relationship he developed with WikiLeaks’ Julian Assange, the relationship that ultimately led to Manning’s arrest and imprisonment for disclosing thousands of classified documents and videos related to American military actions in Iraq and Afghanistan.

The Source by composer Ted Hearne and librettist Mark Doten, which was presented Wednesday at Cal Arts’ REDCAT theater as part of Los Angeles Opera’s “Off Grand” series, is not that opera. In fact, if you are not intimately aware of Manning’s story, it’s unlikely you will come away with little more than a sense of confusion about what you have just seen, since the facts of the case are abstracted almost beyond recognition.

Though it’s called an opera, the work, directed by Daniel Fish and originally produced by the New York-based Beth Morrison Projects, is more akin to an art/video/music installation, the type you might expect to encounter across the street from REDCAT at the Broad Museum or MOCA (the Museum of Contemporary Art).

The audience sits in chairs on the floor of the REDCAT’s black-box theater surrounded by four screens onto which various close-up video portraits of staring people are projected. Are they witnesses, a jury of Manning’s peers, unwitting bystanders, us? There is no right or wrong answer.

As in many contemporary art forms, the creators of The Source have deconstructed the story into its component parts. They use episodes and key phrases referring to Manning’s past, references to Julian Assange as “the white-haired Aussie,” military code speak, and character sketches. The question then becomes how well the viewer can put the pieces together to create a meaningful experience. Although I have read quite a bit about Manning, there was no moment, for me, in which the strands came together coherently.

Hearne, who is a member of the USC music faculty, is part of a movement that seems to directly reflect millennial hard-wiring to social media and multi-tasking. His compositional style consists of rapid bursts, a succession of musical Twitter tweets, Instagram snapshots and Facebook posts. The effect is like musical channel surfing where all styles are created equal: The classical sonorities of the string trio morph into pounding, hard rock and Top 40-style ballads. Brittle electronic pulses give way to radio rap and military chatter, which is sung in phased, distorted vocal harmonies.

The piece is divided into 12 scenes, though there is no actual action. They have titles like: “Explosive Hazard,” “Oh the Shark,” “A Young Boy Releases Several Pigeons,” “Julian in a Nutshell,” “We Called for Illumination at 1630” and “I Encrypt as Much as I Can.”

Doten’s libretto relates Manning’s story and state of mind as shell bursts of memory reflected in a fractured mirror.

I encrypt as much as I can.

I was short, still am.

I’m more potential heat than you ever were.

I’m a mess. I barely exist.

Everything is left in the abstract. We never see Manning, either as a man or in his chosen gender, as Chelsea. There are no characters to relate to on a dramatic level. There are no confrontations or personality conflicts to elevate the drama.

The piece ends with a graphically disturbing black and white military video of a drone strike and its resultant carnage — one of the videos leaked by Manning. But there is no context regarding the action in question. Certainly it is awful, but was it justified under the circumstances?

When the end finally came, the audience was so unsure whether it was the end that they just sat in anticipation that there was more to come until someone brought the proceedings to a close with the sound of two hands clapping.

Abstract and undramatic though it may be, Hearne’s music displays an abundance of craft and complexity, particularly in the vocal lines which are adroitly executed by the singers.

Ultimately it was strange to think that at exactly the same time the opera was going on Hillary Clinton and Donald Trump were debating the role being played by WikiLeaks and the impending battle about to explode to retake the Iraqi city of Mosul.

A stated goal of Beth Morrison Projects is to explore ways of expanding and reinterpreting the operatic experience. The Source is certainly an example of opera thinking outside the box. And for that it deserves praise.