Viet Cuong is an exciting young composer who sees no limitation to his craft. Inspired by everyday sounds, some of his work has been written for objects such as crystal wine glasses or an ordinary hair comb. At only 31, he has already established himself internationally as an imaginative new voice. In demand for new commissions, his work has been performed by such diverse ensembles as the New York Philharmonic, Eighth Blackbird, Sandbox Percussion, and the PRISM Quartet.

The son of Vietnamese immigrants, Cuong, just 31, was born in California, grew up in Georgia, and studied music composition at Peabody Institute, Princeton University, and Curtis Institute of Music. He recently started a new position teaching music theory and composition at the University of Nevada, Las Vegas.

Currently the Young American Composer-in-Residence with California Symphony (2020–2023), Cuong has been commissioned to write three original pieces for them. The first one, Next Week’s Trees, which was written for string orchestra, was inspired by a Mary Oliver poem “Walking to Oak-Head Pond and Thinking of the Ponds I will Visit in the Next Days and Weeks,” and premiered last May online. It will be performed live on Saturday, May 14 at 7:30 p.m., and Sunday, May 15 at 4 p.m. at The Lesher Center for the Arts in Walnut Creek.

I had the rare privilege of watching Cuong develop his second piece, Chance of Rain, live with the California Symphony in January of this year, a thrilling experience, and then chatting with him in person afterward. Originally scheduled to premiere in May of 2022, Chance of Rain will have its live premiere instead sometime in 2023.

While listening to the sketches for Chance of Rain, it sounded like you were using electronics to create an echo. How do you get that effect?

An echoing sound is something that I came to 10 years ago when I wrote a piece for bass clarinet using live delay. After I wrote it, I thought about what it would be like if I just did that acoustically with a lot of different instruments. So around two years ago, I started experimenting with it and I have used it in a lot of different pieces.

You also use a lot of glissando in your work, creating a kind of melting sound.

Yes. It has been a sound that I have been workshopping myself for the last 10 years. I have been thinking about electronic sounds and trying to translate that sound to acoustic instruments. It’s become something I hope is a signature of mine.

When you are composing a new piece, where do you start? With a melody? A theme? A rhythm?

It all depends on which piece. In Chance of Rain, I started at the piano. I will usually come up with either a melody or chords that I use for the starting point of a piece. But sometimes it’s not even a melody or a chord, it’s a sound that I want to use.

In Next Week’s Trees, I just wanted to use pizzicato in the beginning, and then I picked the notes for it. It worked thematically for that piece because of the idea [in the poem] that each day there’s a force of life that gives us hope that next week the trees will still be here. So when the bowing does come in, you get that comfortable sound again and it feels like you’re getting a hug.

In your composition Re(new)al, which I found very compelling, you start out with players toasting each other with crystal wine glasses, creating notes that sound like they are coming from hand bells. How did that come about?

I have a piece for percussion quartet called Water, Wine, Brandy, Brine, and that was where I first tried it. I was in grad school at Princeton and there was a percussion ensemble in residency and they were co-teaching a class with some of the professors on how to write for percussion, so every week we would write a little sketch for percussion and play it and talk about it. One day I was doing my dishes and I accidentally smacked a wine glass with a fork, and I thought, that’s a nice sound. I had never really thought of that. So I bought 30 wine glasses from thrift stores and catalogued them all with pitches and then I wrote that piece.

How do you notate that?

That’s just notes on the staff. When they toast by themselves, there’s a double stop — two notes, and when they toast with someone else, there’s just one note.

How do you notate tipping the glasses for the glissando effect?

Like a violin has a glissando line, I have a little wine glass icon and a tilting symbol indicating how far they should tilt the glass.

It sounds like you get a lot of your ideas and inspiration from ordinary sounds.

Yes. I could be walking down the street and think, that could be a cool sound or a cool combination. I always try to remind myself that composing music is a really exciting thing because everything’s new, and if it’s new, then why can’t a wine glass be an instrument? I have a snare drum solo called Well Groomed that doesn’t use drumsticks. Why not?

Speaking of which — that’s an amazing piece. Tell me what the player is using to play the snare drum.

It’s a plastic comb that you use to comb your hair and a plastic card. As a kid, I always loved the sound of scraping my thumb against a comb because it does a little nee-up glissando thing. It’s a quiet sound, but then I realized that if you put it on a table or a snare drum, it amplifies the sound, so I decided to write it for a snare drum, but use a comb and a card instead of sticks.

How did you notate that?

I basically devised my own system for the piece.

How would you describe your music?

Eclecticism is something that I strive for because it just seems interesting. I write for all sorts of different ensembles — orchestra, wind ensemble, chamber music, and solo music. I approach each of them differently, and it keeps me creative.

How do you like teaching at the University of Nevada, Las Vegas?

I am teaching orchestration and composition lessons and it’s really inspiring because you get perspective — you see these students and you are part of their journey. So I have the honor of playing music for them like Beethoven’s Symphony No. 6 for the first time and that’s really amazing and inspiring.

You’re only 31 and you have come so far with music. Where do you want to see your career go?

I just want to write more music and hopefully write for more people that I haven’t worked with before, and have more opportunities to write pieces that I dream of writing. 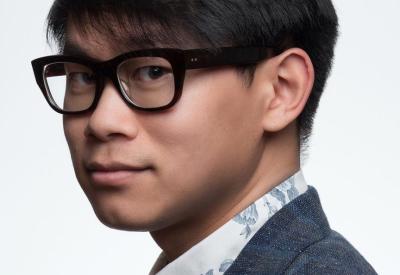 Composer/ performer Pamela Z’s Ways of Looking is the highlight of a concert bursting with energy.