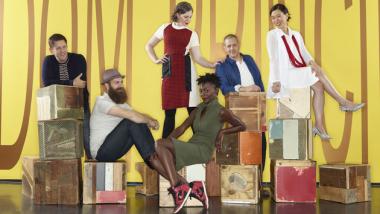 In the world of contemporary music, it feels like Eighth Blackbird has been around forever. Even so, it might surprise readers to ponder that, having formed in 1996, they are about to reach a quarter century of existence. That’s one impressive run.

The activities that have formed the foundation of this inimitable ensemble’s reputation —highlighting young composers, assembling diverse programs, and performing with breathtaking energy and irreproachable precision — were all on display Saturday evening at Cal Performances’ Zellerbach Playhouse on the UC Berkeley campus.

But two items of note made this performance particularly special. The first was the presence of acclaimed electronic composer and vocalist Pamela Z, who performed two of her solo electro-acoustic pieces as well as an astonishing new masterpiece premiered by Eighth Blackbird earlier this year. The second was the fact that Saturday was flutist Nathalie Joachim’s last performance with the ensemble. Toward the end of the first half, cellist Nick Photinos made the announcement (to the audible dismay of the audience; we should all hope to earn such loving fans) and gave a touching tribute to Joachim.

The concert began with three pieces by alumni of the ensemble’s Blackbird Creative Lab, a yearly two-week residency for young composers and performers. Nina Shekhar’s ice ‘n’ SPICE and Viet Cuong’s Electric Aroma are both hugely energetic. Together, they formed a thrilling opening.

Fjóla Evans’s Eroding offered a pleasant and thought-provoking reprieve from the frenetic rhythms. Evans provides each of the performers with the same musical material but asks them to perform it at their own pace. The piece begins densely, with all performers overlapping and intertwining. Slowly, as the performers near the end of their individual scores, the texture thins and eventually unravels. Evans remarks in her program notes that the procedure is a metaphor for the erosion caused by glaciers in her family’s native Iceland.

The first half closed with Holly Harrison’s Lobster Tales and Turtle Soup, which reflects Harrison’s background as a rock drummer. This piece is a wild romp combining the colorful timbres of a mixed chamber ensemble with the punchy riffs and relentless rhythms of heavy metal. Percussionist Matthew Duvall sounded every bit the part, having left his setup of cymbals and mallet percussion to sit behind a drum kit.

Describing her as both a personal influence and a major force in contemporary music as a whole, Joachim praised Z’s bravery and persistence as a pioneering woman in the male-dominated field of electronic music.

Z began her set with Quatre Couches and Badagada, both of which feature her astonishing vocal technique and imaginative use of digital processing. As dense and sonically overwhelming as these pieces are, they are both extremely economical, constructed using minimal procedures to maximal effect.

Eighth Blackbird re-appeared for Z’s Ways of Looking, the centerpiece of the program and the evening’s highlight. Cast in four movements, the piece is constructed around pre-recorded samples of the ensemble members’ speaking voices. The players accompany themselves, their instruments echoing and elaborating on the patchwork of spoken fragments that make up the backing track. Pamela Z herself joined the ensemble onstage, mostly triggering playback events from her laptop, but also singing and speaking in the finale.

Each movement focuses on a different category of word or phrase: a list of names, for instance, or the “ums” and “uhs” in between words and sentences, and even the single word “very.”

Throughout Ways of Looking, the composer delights in both the hidden musicality of the spoken word and the various shades of meaning available by carefully contextualizing and de-contextualizing words. Alternately funny, poignant, and revealing, the entire sonic fabric bubbles along with the shifting cadence of spoken phrases.

It’s a rare delight to hear a composer assemble sound with such deft ease, and yet simultaneously such clarity of purpose. The piece’s subtle shifts between sharp humor and bittersweet reflection feel so light, so elegantly simple, defying the tedious editing and detailed listening that must have gone into constructing it.

Eighth Blackbird and Pamela Z were a perfect match, continually discovering and amplifying each other’s musical identities and strengths.

Traditions and Trailblazing With Nathalie Joachim

The Haitian-American flutist talks about making her own musical path and finding common cause with Eighth Blackbird.

Pamela Z Unveils a New World of Sound at Zellerbach

The pioneering electroacoustic composer talks about her collaboration with Eighth Blackbird on a piece to premiere Dec. 14.

How Do You Start a Successful New-Music Ensemble?