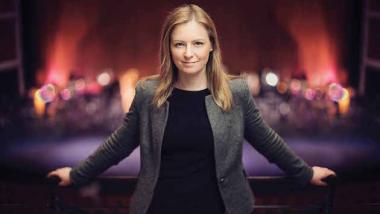 Thirty-three-year-old New Zealand-bred conductor Gemma New (her given name is pronounced “jem-mah”) is still relatively new on this continent, but she’s making herself better-known over the summer with a slew of U.S. debuts that will have her leading the San Francisco Symphony at Stanford’s Frost Amphitheater in an all-Tchaikovsky evening next Wednesday and a program of Ravel’s Shéhérazade and Beethoven’s Ninth Symphony next Saturday and Sunday, as well as stops in Canada and Germany. Last year she was a conducting fellow at Tanglewood, and she’s guest conducted in Scotland, Sweden, and Switzerland, as well as in her native New Zealand.

After earlier graduating with honors in violin performance from her country’s University of Canterbury, New first came to the U.S. to pursue a graduate degree in conducting at the Peabody Institute, where in 2010 she also founded the Lunar Ensemble, devoted to contemporary music. In 2013 she made her Carnegie Hall debut conducting works by John Adams and Andrew Norman. She served as a Dudamel Conducting Fellow with the Los Angeles Philharmonic, was selected by members of the Vienna Philharmonic for a Salzburg residency, and studied with Kurt Masur in Leipzig as a Felix Mendelssohn-Bartholdy Fellow.

New has held longer stints as resident conductor of the St. Louis Symphony and music director of the Hamilton (Ontario) Philharmonic Orchestra, and she was recently appointed principal guest conductor of the Dallas Symphony Orchestra for the 2019–2020 season. Her work with contemporary operas will include the Opera Theatre of St. Louis’s company premiere of Carlisle Floyd’s Susannah in 2020. A two-time winner of the Solti Foundation Award for young conductors, New found the time this week to chat briefly with SFCV.

What’s it like switching ensembles as frequently as you do at this time of year?

When you’re meeting a new orchestra for the first time, it’s like meeting a new potential friend and trying to get to know all about them. So there’s a lot of listening involved and sharing of ideas, and this happens as subtly as the sensing of it, or as extroverted as speaking it clearly, so it’s always exciting. You always have to come with a very open mind, that we are all unique, and so trying to find the right way to play it for the week is very important.

What differences do you discover?

We all have tendencies, whether it’s slowing down or speeding up or the character of the solo, these things can be polar opposites with each and every orchestra, so it’s really just listening to the tradition an orchestra has. It’s not better or worse. And it’s always a two-way street of conversation ...

Any particular anticipations of the San Francisco Symphony?

I have been told by many people, and I’m aware of it myself from having heard the orchestra both on recordings and live, that this orchestra is of an exceptionally high level. I think it will be a joy to hear their music-making.

And any particular challenges with your debut program?

Tchaikovsky, which we’re starting with, is music that’s deeply emotional, often quite turbulent. There’s a lot of stretch and sensitivity. It’s trying to find the right pacing; for a Tschaikovsky symphony especially, it’s a roller-coaster marathon.

How do you ride it, from the podium?

It’s having that sense of breath in the line, and always making sure that it doesn’t run out, but also making sure that it has the time to show the beauty, the delicacy, the detail of the line that he creates. And also, it’s not just the melody, it’s all of those intricate inner lines, and the bass line as well, that support the melody. He’s quite a craftsman, weaving them all together, so it’s finding the moments of how they can, in conversation, pop out of each other, rather than all play at the same time and crowd each other out.

For your other debut program, you’re tackling Beethoven’s Ninth. Aren’t you saddling a big warhorse?

[Laughs] Absolutely, and it’s a magnificent work. But what I’ve really loved about this work is that it’s an ode to joy, it has got that path from darkness to light, that journey which is also in Tchaikovsky’s 5th, which makes both works incredible and powerful and very satisfying to prepare and play, and that’s why we love them. Also, I love the idea of the Beethoven 9th unifying the people. I think it was really Beethoven’s aim with it, in speaking to all folks to get together to support each other. It’s a challenge worth striving for. It’s a work I first got to know as a teenager.

What were you doing with it back then?

I was principal second violin with the Wellington [New Zealand] Youth Orchestra, and we spent many weeks trying to get comfortable with all the phrasing and parts. It’s like an onion, there’s lot of layers, so over the years you get deeper into the understanding of the piece. It’s like a good wine, it takes a bit of time. With the San Francisco Symphony this is going to be a big step, absolutely.

Has your experience in opera better fitted you to work with the Ode’s voices?

Absolutely. I feel like Beethoven’s melodies are not something we often talk about; we talk about the driving rhythms and the character and the structure. But when he does have a melody, it’s perfect in its simpleness. It invokes a hymn, which is spiritual, but it’s also like a folk song.  With any line, as a conductor, I try to sing it first, because if I know how to shape it with my voice, the gesture comes more naturally.

You began making music as a child on the violin. What moved you to the podium?

I started playing in orchestras when I was 9 ... creating that beautiful sound that no one can do alone, and I got hooked on that. Then I got my first opportunity to conduct when I was 15, and I loved getting into the detail of all the parts, and having that communication. I got my first job conducting when I was 19, with a youth orchestra. That was in Christchurch, when I was doing a violin degree.

You also read other topics in college.

I was pursuing a double degree in mathematics. And I found the algebra and the proof theory and the way they analyze really useful for developing a shorthand when I analyze music. I have a score and a notebook and a stream of consciousness which is analyzing the score. It makes sense of phenomena.

I gather that the music of New Zealand composers has also stayed with you. I admit to not knowing much about them.

New Zealand is about four million people on quite a large space of land. Two big islands. Nature is abundant, and a lot of our music is based upon the wind and the sea and the rain and the birds and the forests and animals. Right now I’m in Tennessee, and we’re doing Rainphase by [25-year-old New Zealand composer] Selina Fisher, which is one of my favorite pieces. It’s based upon the different stages of rain and wind in my hometown, Wellington, which is the windiest city in the world. And one of the hilliest, with a harbor. It’s actually quite like San Francisco.

I was going to say so.

I love new music when it has a unique voice and at least some part of the message has a sense of beauty.

One of your adopted hometowns is Hamilton, Ontario, and I’ve read that you’re also an exponent of Canadian music.

The Hamilton Philharmonic performs a lot of Canadian music and I’ve really enjoyed getting to know their composers. We’re able to invite them to the concerts of their music.

You’ve been lauded for what’s been described as an “intimate and immersive” concert series there in Hamilton. What’s that like?

It’s an alternative way of experiencing orchestral music, and it can be from any genre. We’ve done Bach, we’ve done Charles Ives, Mozart, Stravinsky, and contemporary Canadian music. We create more intimate venues where the orchestra is in the center of the room. We encourage people to get up and move around during the break, to a new vantage point. We have screens and visual artists we collaborate with. We’ve had fabrics, floating things, and smells, trying to elevate all the senses. For people who’ve found the concert hall too foreboding to walk in the front door, they want to feel welcome with a vibe that’s maybe closer to a rock concert or going to a bar. A lot of people are now coming to the orchestra for the first time, some of them for the indie bands that play at the beginning of the concert, and during intermission. We all mingle for a drink and get to know each other, and talk about the program. Hamilton has a particular personality: It’s strong people, and they want to talk to you, and it’s engagement that we really wanted.

Your conducting fellowship in LA put you in close contact with maestros Dudamel and Salonen. What do you pick up from other conductors?

I’ve learned a ton from them and from Michael Tilson Thomas as well, and I just had a week with Herbert Blomstedt. I’m very grateful for these opportunities to sit and observe how these great conductors work with fine orchestras. I would take note of how they make decisions, what they say, how they show what they want. But you can never be someone else. When you conduct, it has to be a natural intention. I would hope I’m following in their footsteps, but they do have really big shoes to fill.

S.F. Symphony takes to the brand-new stage on July 10.

The superstar violinist is the standout in a program that didn’t always work.

The conductor misses the season’s final subscription concerts but will be back on the podium in September.