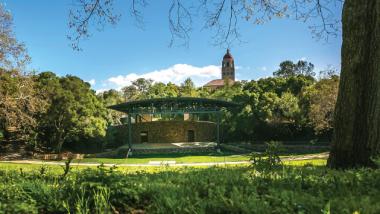 A forgotten concert venue in the mid-Peninsula is returning to life. Frost Amphitheater, Stanford University’s outdoor bowl, has been refurbished and is making its classical debut in this new form with San Francisco Symphony summer programs in July.

Frost is a historically important venue which opened in 1937 and holds up to 8,000 people for standing-room-only events. For many years it hosted noted performers and speakers ranging from the Boston Pops to Dag Hammarskjöld to the Grateful Dead. But in recent decades, Frost fell into disuse because of its complete lack of amenities and infrastructure. Everything from tents to use as backstage facilities to port-a-potties for the audience had to be hauled in for every show over the high berm that surrounds the venue.

Now, as part of rebranding this part of campus as an arts center — Frost is right next to Bing Concert Hall, with which it will share an outdoor patio and plaza — Stanford has built a completely new and full-stage facility, and refurbished the audience area as well.

The first thing audiences will notice as they come in by the main entrance from Lasuen Street, near Bing, is a tunnel through the berm. No more need to climb over it, and the tunnel offers a quicker exit as well as entrance. Next to the tunnel is a new, permanent, free-standing restroom building, with a larger one near the back of the bowl, by the old, over-the-berm side entrance from Galvez Street. Stanford Live, which is managing events, promises numerous carts with elegant food and drink offerings to enliven preconcert and intermissions in the patios outside the berm.

The seating area is still grass terraces with ancient, chipped concrete frames, except that several sections have been paved for ADA seating. For classical concerts, Stanford Live says it will load the lower seating area with full-height chairs for reserved seating. Those not up to planting themselves on blankets or legless stadium seats that they bring themselves will thus have somewhere to sit.

But the glory of Frost promises to be the new stage facility, designed by Stanford alumnus architect Chris Wasney. Facing the audience as the stage backdrop is a large rock wall, forming both an arresting but subdued sight and a broadcasting reflector of sound. The wall and the canopy (for lights and to hold backdrops) are designed to let the audience see around them to the berm and trees that form Frost’s attractive natural setting.

The stage facility will also well serve performers and crew. There’s easy loading from a dock behind the amphitheater, via another tunnel through the berm, onto a freight elevator going down to stage level at the bottom of the bowl. Backstage are the dressing rooms and other amenities expected in any decent indoor venue.

Frost will be hosting a busy concert series of popular music, including in this inaugural season Lionel Richie and the electronic band ODESZA. And as classical residents, the San Francisco Symphony — which long ago abandoned its only South Bay venue, the peculiar Flint Auditorium in Cupertino — has signed up to give two summer festival programs in July.

Michael Tilson Thomas will conduct an all-Tchaikovsky program, featuring the Fourth Symphony and Gil Shaham in the Violin Concerto, on the evening of July 10, and new guest conductor Gemma New will lead Beethoven’s Ninth Symphony in two performances, an evening show on July 13 and a late-afternoon matinee on July 14. Frost is known for good acoustics, but the Symphony will find out on the day how the new stage affects this. As with most outdoor venues, there will be restrained amplification.

In announcing the 2017–18 season, Chris Lorway is looking to expand Stanford’s cultural footprint.

The orchestra announces plans for shows at Frost Amphitheater.

A new 399-seat recital hall is at the center of the new building.