Gabriela Ortiz’s two-decade relationship with the Los Angeles Philharmonic began in 2003 when Esa-Pekka Salonen conducted the premiere of her percussion concerto Altar de piedra (Stone altar). The ensemble has since commissioned five additional pieces from the Mexican composer, including the latest in her cycle of “musical altars.” This weekend, Gustavo Dudamel leads the LA Phil in the world premiere of Ortiz’s violin concerto, Altar de cuerda (String altar) featuring Spanish soloist María Dueñas.

The concert is part of an inaugural series from the LA Phil’s Pan-American Music Initiative, spearheaded by Ortiz and Dudamel. While the “pan-” prefix evokes cross-continental exchange, the programming in this month’s festival is clearly centered on the music of Latin American composers. Alongside repertoire by established figures like Ginastera and Revueltas (plus a couple of gringos, Beethoven and Stravinsky), the orchestra will perform commissions by living composers: Alex Nante (Argentina), Ricardo Lorenz (Venezuela), Gonzalo Garrido-Lecca (Peru), Francisco Cortés-Álvarez (Mexico), Heitor Villa-Lobos (Brazil). The initiative aims to sponsor “at least 30 new works” within the next five years.

But whether we use the label “Pan-American” or “Latin American,” Ortiz warns us to be cautious about how we represent the music of Hispanic composers. In a phone interview from her native Mexico City, she stressed the importance of recognizing the rich cultural diversity of Central and South America, as well as acknowledging that multiple intersecting identities can exist within individual composers, as demonstrated by her latest piece.

How should we define “Latin American music”?

Latin American music is a huge continent. It’s a multicultural continent. It’s not the same if we talk about Venezuelan music or Colombian music or Argentinian music. There’s a difference there. And sometimes, especially in Europe or elsewhere, they don’t know our music. They put everything in the same category and they stereotype us. “Oh, the music of Latin America should sound like this.” But no — Argentina’s history is very different from Mexican history. They have to understand that, even though we share the same language (except for Brazil), it’s a really enormous continent, and there are many differences between these countries. For me, it was very important to show this in the Pan-American Initiative — to premiere pieces from Brazil, from Colombia, from Venezuela, from Mexico.

Sometimes I’m very tired of “Latin American music = fiesta!” It’s not like that. We belong also to the European Western tradition. I mean, at least in my country, the Europeans came 500 years ago! We have that influence as well. Trying to have this idea of how Latin American music sounds like is really wrong, because they try to put it in a certain kind of program or context.

They expect it to sound a certain way, but it doesn’t always sound that way.

I’ve heard the same thing from Chinese composers who run into the stereotypes of, “Oh, you’re Chinese, so your music should be pentatonic. It’s supposed to sound Chinese” (whatever that means). Sometimes they want to break free of that.

It’s exactly the same. But I believe that mixes are incredible. So my answer is: I use what I need to use in my music.

Would you talk about your upcoming world premiere with LA Phil, Altar de cuerda?

I have a series of pieces that I call Altares, the first of which is called Altar de neón [Neon altar, for percussion ensemble, 1995]. But it’s not “altar” in a religious way. For me, the meaning of altar is that the music becomes the most important thing — it becomes the spiritual thing.

I spent five years living in England, and when I came back, it was very interesting because that was the time when Mexico signed the free-trade agreement with the U.S. and Canada. Suddenly, Mexico imported all these branches from the U.S. Suddenly, it was full of McDonald’s, Blockbuster, and Office Max. So when I came back, I saw a different city. Immediately, I felt like Mexico looked more like the U.S. And then I went to visit my brother in L.A. — he’s a visual artist and a full-time professor at UCSD. I was visiting certain parts of L.A., and I thought, “Oh, this is really Mexican! It’s like walking in one of the streets in Mexico City.” So what is happening here? It turns out that L.A. is looking more Mexican, and Mexico is looking more like L.A.

Then I went to this church in Mexico City, and I saw this altar with neon lights all over it. And I thought, “This is so postmodern!” You see these kinds of images, like a saint with Mickey Mouse and neon lights. And in some way, my music is a mixture like that. It’s a mixture between my cultural backgrounds — my European side, but also being Mexican. And then my love for popular music and mambo. All of this is a huge cocktail, but it’s part of who I am. So I started writing this series of pieces that are called Altar: Altar de neón, then I have Altar de muertos [Altar of the dead, 1997], which is a string quartet I wrote for Kronos Quartet.

Cuerda is the string of a violin — it’s a concerto for violin. And it has three movements. The first movement is called “Morisco chilango,” which I’ll explain. When you analyze Spanish Colonial Revival architecture in California, it’s a mixture of a lot of things. For me, it’s the nostalgia of the Americans trying to be Spanish or trying to be Mexican — the nostalgia of the hacienda, and the Mediterranean, and the Arabic influence as well. It’s very interesting, because it turns out that Colonial Californian is not Spanish, it’s not Mexican, it’s not Mediterranean — it’s American. It’s something totally different. But the funny thing is, we import the Colonial Californian into Mexico City! We have a lot of neighborhoods in this style, and it’s becoming even more baroque and crazy — more hilarious! So this idea of the copy of a copy of a copy, that’s very interesting for me.

What I did with “Morisco chilango” is to trace this idea. All the people who live in Mexico City, we call them chilangos. So it’s my version of something that could be Arab or morisco or Mudéjar. Also because this concerto is dedicated to Spanish violinist Maria Dueñas, who’s from Andalusia, where you can find lots of examples of Mudéjar architecture — in Córdoba, in Granada.

The second movement is called “Canto abierto” [Open song] and again I’m thinking about architecture. When the Spanish came to Mexico, in order to evangelize they had to build these open-air capillas [chapels], because the indigenous people didn’t go to religious events in closed places. For some reason, they didn’t like it. They’re called capillas abiertas, but I didn’t want to use the word capilla because it has a religious meaning. Instead of that, I called it “Canto abierto.” It uses the orchestration and the way the orchestra interacts with the violin to build these huge chords in a very wide way — a lot of divisis on the strings. Even graphically, you can see that I’m building something that is very open. I’m using also crystal cups — my idea is to create something really magical in which the violin plays these expressive melodic lines.

And the third movement is called “Maya déco.” If you look at the architecture of Frank Lloyd Wright, you will see that he has a lot of Mayan themes in his architecture.

Exactly! And also, the Palacio de Bellas Artes [in Mexico City], for example, mixes pre-Hispanic with art deco. This mixture! How can you think of art deco with the Mayas? So, I decided to call this movement “Maya déco.”

You’ve found such potent architectural metaphors for your own mix of musical and cultural backgrounds. It’s clear the Pan-American Initiative is an ideal venue for expressing your complex identity alongside fellow Latin American composers without feeling like you have to fall into stereotypes or tokenism.

I do this exercise: If you look at books about 20th-century music and you find “Latin America,” it will say, “musical instrument: conga.” That’s it! And there are the stereotypes of Mexico with the huge sombrero and big sarape — or Speedy Gonzales! “Amigo, amigo!”

So this is one of the best things I’ve ever seen from a U.S. orchestra. I’m seeing a change with the programs in the orchestras — they are more inclusive, more diverse. But this effort, of being able to commission pieces from young composers from Latin America, I think that’s unique, and we have to celebrate this.

The music of Mexican composer Gabriela Ortiz weaves a thread through a COVID-postponed anniversary season.

The thrilling new composition deserves to be in the front ranks of current orchestral repertory. 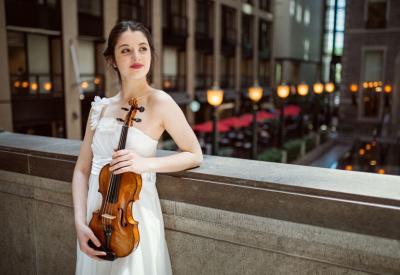 Ortiz, Villa-Lobos, and The Firebird with Dudamel