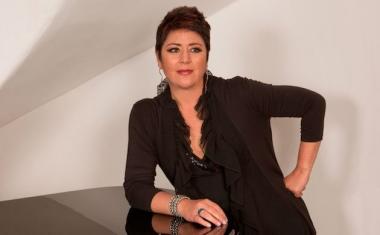 Born in Mexico City in 1964, to parents who established the well-known ensemble Los Folkloristas, a group founded to preserve and record the traditional music of Mexico and Latin America, Gabriela Ortiz is one of the foremost composers in Mexico today. Playing guitar and folk music with her parents, she began studying piano at age nine and by 15 she knew she wanted to be a composer. Eventually graduating in composition in 1990 from the Escuela Nacional de Música, where she studied under Federico Ibarra Groth and Mario Lavista(and where she teaches today),  Ortiz continued her studies at England’s Guildhall School with Robert Saxton and at the University of London with Simon Emmerson, completing her doctoral studies in electroacoustic music.

Ortiz, whose honors include a Guggenheim Fellowship and first prize in the Silvestre Revueltas National Chamber Music Competition for her work, Altar de muertos, has since been commissioned and played by prestigious ensembles, soloists, and orchestras, including the Simon Bolivar Orchestra in Venezuela, the BBC Scottish Symphony, and her home town’s Philharmonic Orchestra. Other notables that have premiered her works, which have been characterized by its rhythmic energy and exuberant sonic effects, include the Kronos Quartet, soprano Dawn Upshaw, violinist Pierre Amoyal, and La Camerata Chamber Players, among others.

In the spring of 2013, Ortiz’s opera, Camelia la Tejana: Only the Truth, with a libretto by the composer’s brother, L.A. artist Rubén Ortiz, and a storyline that dealt with border drug trafficking and Mexican feminism, had its U.S. premiere by the always adventurous Long Beach Opera. The composer has also had a long-term association with the Los Angeles Philharmonic. Indeed, in 2003, under then music director Esa-Pekka Salonen, Ortiz’s Altar de piedra (Altar of stone), a concerto for four solo percussionists (the Swedish ensemble Kroumata) had its world premiere. And in 2017, as part of the music festival CDMX (Ciudad de México), Ortiz’s work, Téenek — Invenciones de Territorio (Territorial inventions), which was commissioned for the occasion, was conducted by Gustavo Dudamel.

That fruitful pairing will again be on view when Dudamel continues the L.A. Phil’s centennial festivities on Oct. 27 with the debut of Ortiz’s Yanga. The 17-minute work, with text by librettist Santiago Martín Bermúdez, is based on the story of Gaspar Yanga, an African prince, Mexican hero, and freedom leader, and opens a program that concludes with Beethoven’s Ninth Symphony. I spoke with Ortiz by phone from her home in Mexico City the day before she was scheduled to fly to L.A. to hear her latest work.

How would you describe your history with the Los Angeles Philharmonic?

It’s one of the best experiences of my life. When you have such an orchestra like the LA Phil that’s so committed to new music, it’s unique in the world. What they’re doing is unbelievable — commissioning so many pieces — and on almost every single program [there] is a new piece or a 20th century piece. They’re promoting new collaborations with composers and artists and it’s such an immense amount of energy that they bring to the new music now.

For me, it’s a huge privilege to be able to work with them and see how they can be so committed to all different aesthetics. That’s also something I really admire. They really promote the music in a broader sense [and] they can play anything — Asian composers, composers from Latin America, European composers. It’s incredible and the openness to that is unbelievable. If you think about the musical scene in the 21st century, it’s so eclectic and there are so many aesthetics right now. I think the LA Phil has that vision, which is really amazing.

It would seem that you also have a lot in common with Dudamel.

We can understand each other very, very well, yes. Of course, Mexico is not Venezuela, but we have a lot of things in common — language, the moods of our culture. The music from Veracruz is very similar to [that of] Venezuela, and that connection is very strong. As Latin American people we feel a very strong connection and working with Gustavo was no exception. I think he understands perfectly well my aesthetic and the way he thinks about rhythm — the pace — and he’s also very energetic. He understands what I was trying to communicate in Téenek, and that was fantastic.

Could you please talk about the genesis of Yanga and the notion that it’s paired with Beethoven’s Ninth?

When Gustavo Dudamel asked me to write a piece that should be programmed with Beethoven’s Ninth, I have to confess I was totally in shock. That symphony is one of the most important works in musical history and I was like, “What can I do? I’m going to commit suicide.” I felt a lot of pressure, but on the other hand I couldn’t say no, so of course I said yes. You have to think of the text and that [Dudamel’s] request was something that I could be part of — that it could have a relation with the text of Schiller.

He also asked me that it would be really great if the text is in Spanish. I thought, “I need a text in Spanish, my piece is going to be with Beethoven’s Ninth and it requires an orchestra.” I couldn’t sleep for a month.

I understand Yanga is a subject you’d been thinking about for a while.

Yes, Gaspar Yanga was from the royal family of Gabon in the 15th century and was captured and brought to Mexico as a slave. He was a prince and suddenly he became a slave, in 1570. He managed to escape and live as a fugitive for over 30 years. During those years, he helped other African slaves to escape and with all these people he organized constant assaults [on] caravans. Imagine a Robin Hood that came and took the gold from Mexico City to the port of Veracruz and then they sent it to Europe.

What happened is that Yanga promised to stop if he and his people were allowed to live freely and produce their own gold. He was [part of] the first free town from slavery and the first independent settlement on the continent, in 1609. I was fascinated with that story and I started working on that subject. I wanted to write an opera around Yanga’s life so when Gustavo asked me to write a piece for choir and orchestra to be with Beethoven’s Ninth, I immediately started thinking about Yanga’s life, about freedom, equal fraternity, and this is before Beethoven, so this is perfect and that’s what I decided.

The subject sounds intriguing. Who is the librettist and why did you decide to bring into the mix the Grammy-nominated percussion quartet, Tambuco?

Santiago Martín Bermúdez wrote a wonderful poem for this project and then I also thought about having this percussion quartet, Tambuco — they’re marvelous. I met with Dudamel in February and wanted to explain my idea, which he loved. I also said that I wanted to bring this percussion quartet, because they could bring all the African sounds that I need for this project.

They know very well how to play world music and they’ve been training as classical musicians and also know how to read music perfectly well. This is a perfect addition to my project. One of the features for this work is that I needed African instruments, and it was my idea to add unique color of these instruments like batá — Cuban drums — without trying to directly emulate African rhythms. I’m not emulating anything, it’s from my imagination.

Again, it’s something totally different than Beethoven, because to imitate Beethoven — I’m dead. What can I do? So the only way to be far from Beethoven was to be myself and do something completely different. This is like an orchestral work that could be an opera in the future. Believe me, I’m totally excited and totally nervous. It’s been a lot of work, but I’m very proud. I really think that for me, Yanga is a work of an immense expressive force that speaks of the greatness of humanity.

I understand that you decided you wanted to be a composer rather than a pianist after listening to Bartók’s Mikrokosmos.

I had a privilege to study in primary school where I had the opportunity to meet Mexican composer Mario Stern. He was from Germany but he arrived earlier to Mexico City. He was a wonderful professor and really introduced me to musical creativity by playing, by doing lots of exercises. I was totally immersed in that world and he said, “You have to compose something and we’re going to record it.” So, I started organizing people — you’re going to play bongos, you’re going to play xylophone — and I started inventing things and creating melodies.

What is your composing process like and do you think about your music being characterized as Mexican?

It depends on what I’m working on. In this case of Yanga, the whole story, the text was already giving me lots of ideas in an historic context. When you do a [textless] work it’s just difficult because it’s more abstract. You’re thinking about sounds but it’s different. Your inspiration is more abstract. Inspiration in Yanga is coming from the wonderful historical Yanga’s life.

When I compose I am not trying to sound Mexican but I am just doing what I have to do, because it’s me and I live in Mexico. I also like my country, so my music comes out in a very natural way.

In 2009, The New York Times’ Allan Kozinn wrote of you and your 1998 work, Estudios entre preludios that, “her gentle-voiced, gracefully flowing preludes are homages to Debussy and Takemitsu, and her more fiery, rhythmically pointed and occasionally pugilistic études pay tribute to Bartók and Ligeti. Who have some of your musical influences been?

I have lots of influences. It’s difficult for me to define because I think my music can be quite eclectic. I use everything that gives me some fuel for my creativity. I don’t think I should restrict myself to certain kinds of influences, because everything could give me ideas. I like folk music and pop and jazz. I have my favorite composers — Bartók, Stravinsky, Debussy, Ravel. I also like Thomas Adès and Kaija Saariaho. Everything that stimulates my creativity, it’s going to be there.

Have you faced any challenges being a woman composer or hasn’t that been an issue?

It’s difficult to explain because I think that I’m just a composer — not even a female. Just to be a contemporary music composer is difficult — even if you’re a man, especially internationally. It’s not only to be a woman, because Europe is not looking to Latin America. If you look at their programs, there are no Latin Americans and it’s even more difficult for me, not only being a woman, but I’m Latin American. They don’t know that we have a strong contemporary music scene. We know what’s happening in Europe, but they don’t know what’s happening here.

The Internationalists Have Their Say at L.A. Phil’s Mexico City Festival

The CDMX Festival ended on a serious, new music note, with composers who are part of an international community of explorers.