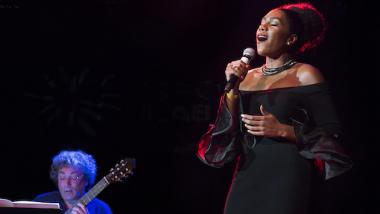 Fist bumps and high fives don’t often follow a mezzo-soprano’s brisk high Cs or equally impressive delivery of low range, dusky, rich notes, but when ambition appears in the voice and form of J’Nai Bridges, it’s hard to resist. It’s well known that the 30-year-old opera singer gave up a promising basketball future — and likely, college scholarships —  when, during her senior year at the high school near her hometown of Lakewood, Washington, she turned from game-time hollering to more controlled vocalizations.

Onstage Nov. 21 to Dec. 10 in the San Francisco Opera’s commissioned world premiere of John Adams’s Girls of the Golden West, Bridges appears as Josefa Segovia. The role of a Mexican barmaid around whom the production climaxes in a final scene she’s loathe to divulge, lest she spoil the surprise, is a solid fit.

“I love this role,” she says. “I directly relate to her because she’s a woman of color and the cards are stacked against her. I can’t say I would go where she goes in the end, but she observes, she tries to be the backbone, the [good] conscience of everyone. She tells other characters to heal their souls. I’ve felt that urge — to be the best person I can be while telling others to be the best they can be, which isn’t always welcome.”

Bridges says Josefa’s final aria is simultaneously exciting and intimidating. It requires her to sing with equal power in her highest and lowest ranges. The words and scene are highly emotional. She admits that she won’t release herself entirely to the moment. As is often the case for singers whose voices make them seem otherworldly, the truth spoken makes Bridges appear suddenly human: “Honestly, I can’t sing well when I’m crying. Can you?” she asks.

You can count on Bridges to be forthright, dynamic, and spirited when she attacks a role, from the “slides on me like a glove,” resiliency of Carmen to the tragic, emotionally demanding Lucretia in Benjamin Britten’s The Rape of Lucretia. The temperament of the latter is not natural to Bridges, but the vocal and acting requirements of the role leave her juiced, eager for the next challenge. Asked what her future might hold, Bridges says, “I’d love to ride some time as a mezzo-soprano, but eventually, I’d like to sing Delilah and Verdi roles, when my voice is ready.”

Outside of opera, or rather, alongside it, there are film and television aspirations. “I’d love to incorporate my voice and acting in that world. I’d like to get my foot in the door.”

Likely, it will not just be her well-placed foot that intrudes; it will be her entire being and passions that include a fondness for salsa dancing, exercise at least four or five days each week, drinking little alcohol but copious amounts of water — “The places we tour, you know, it’s really, really dry sometimes. I am a firm believer in water,” she says. Insisting on the need to sleep eight hours, indulging in bi-monthly massages, she sticks to her regimen for one practical reason: “When I fall off the routine, it’s more difficult to sing.”

Centering her mind to withstand the emotional blows that are inevitable in opera’s competitive, high stress climate she says is rooted in her childhood. A mother who is a teacher and a father in the military resulted in Bridges and her three siblings being exposed to sports, arts, travel, diverse people and cultures. “It’s easy to be caught or derailed in this business. My family ground me. They can be brutally honest if I ask them what to do as a singer. Support comes from my manager and voice teacher who give me solid backing too.”

Categorizing feedback is a skill Bridges has honed much like an athlete builds pliancy and durability in a muscle or joint. Reviews can be cruel, but are only one person’s opinion. Bridges knows before reading any review whether or not a performance she has given is good or bad. “I do read all of the reviews. One review of my Barber of Seville said I struggled with some of the coloratura but that I might achieve it someday.

I thought, yeah, that’s true. A review adds or causes me to think, but it never destroys or breaks me down.”

Instead, commentary propels extra practice to make her voice remain even from top to bottom or to find more dark or bright or otherwise impressive colors in her voice. Bringing her naturally dark tones forward into greater clarity requires the most intentional concentration. “In my head, what I hear is not what the audience feels. I record myself to retain the information. It’s my biggest victory to bring my voice out so it doesn’t get stuck.” For that, Bridges warms up from bottom to top, focusing on her core to ground her voice, resisting the urge to strike a phrase. “I’m conscious of being on my breath through the first sound. It creates flow and causes you to not do anything crazy. I ride the breath elegantly instead of stomping on it.”

Spiritual and artistic depth is developed by understanding a composer’s intent while also having a personal subtext: What would I do if I was a barmaid faced with being physically attacked? What actions would I take if subjected to racial discrimination? “If I don’t feel truth, it’s boring. And the audience knows you’re not connected,” she says.

As an African-American opera singer who’s not a fan of labels, Bridges nonetheless embraces her position. “If I say I’m not a role model, it would be ignoring a huge part of who I am. I do consider myself a role model for the African-American community, for people of color, and for women. I want my music to speak through all of these labels. I say, we are all homo sapiens. I try to go to inner city schools where there are people of color. I tell kids no one can tell you who you are or what you can do as a person of color and as a woman.”

Responsibility extends beyond race to encompass the full spectrum of her life as an opera singer. “I’ve exposed many people to classical music. That goes beyond race. It’s my duty, because I’ve been given this gift. Admit it, opera has been kept away from people. Having been put on this earth as a black person with certain privileges, I can’t keep it away from people who don’t know it. That’s how we’ll come together in all fields  — music, art, technology. We have to spread the wealth. Until we can get over having hierarchies, I’m going to do my part.”