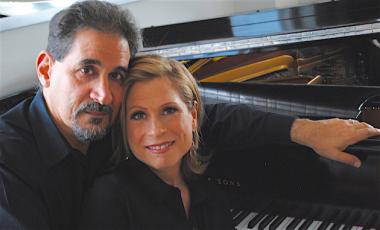 John Musto and Amy Burton Make a Life Together in Music

Fools, marital discord, and drinking wine are all featured in the short comedic opera, Bastianello, set in 18th-century Italy. The groom quarrels with his new wife and in-laws on their wedding night and he sets out on a quest to find six even-more foolish people. That story, however, is very much the opposite of the opera’s composer, John Musto — he has been happily married to soprano Amy Burton for 34 years. They will both be performing in the opera on July 16, as part of the 14th-annual Festival Napa Valley, which runs from July 12–21, and includes more than 60 concerts and events at a variety of venues.

The program is called Opera at the Castello, and will take place in the courtyard of the charming Castello di Amorosa winery in Calistoga, built to resemble a 13th-century Tuscan castle. The performance will include two pianos and five singers, with Musto on one of the pianos and Burton singing one of the roles. Originally commissioned by the New York Festival of Song to celebrate its 20th anniversary, Bastianello, with a libretto by acclaimed New York lyricist and librettist Mark Campbell, premiered at Carnegie Hall in 2008 and was performed last year at the San Francisco Conservatory of Music.

Musto and Burton, who are based in New York City, have forged successful careers individually and together, and have raised a son, Joshua, who is also a professional musician. An acclaimed and very much in-demand pianist and composer, Musto has won many awards over the years, including two Emmys, and was recently selected to be one of only four 2019 artists to receive the prestigious Arts and Letters Award in Music from the American Academy of Arts and Letters. Along with a busy composing and performing schedule, he currently runs the graduate program’s performance department at the City University of New York.

A sought-after opera singer and teacher for three decades, Burton has performed with major opera companies worldwide, including the Metropolitan Opera, the New York City Opera, at the White House, as well as in recitals and in cabaret settings. She is currently on the voice faculty at the Mannes School of Music, and will be joining the vocal arts faculty at Julliard in September.

In addition to their individual careers, Musto and Burton often do residencies and master classes together at universities and conservatories, and have become popular together on the cabaret circuit. I recently caught up with them by telephone from their home in New York City, and we chatted about their upcoming performance in Calistoga, and how they manage their busy work and personal lives together in the Big Apple.

How would you describe the style of the music in Bastianello?

John: There are many different styles in it. It’s a comedy first of all, and most important, and I would say that it’s rather eclectic. It has someone singing the blues, it has a lot of counterpoint, and it closes with a chorale.

Once you get the libretto, how do you approach composing an opera?

John: With an opera, the composer’s job basically is to analyze the scene and put yourself in the shoes of every character and figure out what they want, what they’re after, what they’re feeling, and the general atmosphere of the scene, and then the music just follows.

What kind of roles opera roles did you mostly perform, Amy?

Amy: I have a lyric voice and the parts that I played — that my voice was most suited for — was as the sweet young thing, and I managed to eke out three decades of being 16. There is very little operatic repertoire for the older woman, which is why I came to do a lot of cabaret.

Have you performed in this opera before, Amy?

Amy: No. I have never performed in one of John’s operas, not for lack of wanting, but the opportunity hasn’t been there, so I am very excited about this.

You were on your own career paths when you met and now you often perform together. How did that evolve?

Amy: I was just beginning my opera career when we met, and that continued without a stop for the next 30 years. I was on the road all the time singing. Years later, we found ways to work together as my opera career dwindled down a little bit. We did a lot of recitals and cabaret, not just classical music, because we both came from eclectic musical backgrounds.

John: When we were starting out, we really didn’t have much chance to play together because Amy was on the road, sometimes 10 months a year, so there was a lot of shuttling around, and then when Joshua came around, it just got more complicated.

What are you currently working on, John?

John: I just had a cello sonata premiered at Copland House in Westchester and they want another piece from me next season. I also recently did a children’s opera for Chicago Lyric Opera.

You write and perform in many different styles. Is there one that is your favorite?

John: One of my favorite things to do is to play the Great American Songbook and do cabaret, and we do it a lot. We have a one-day turnaround when we get back from Napa and then we go to Massachusetts to do a program with William Bolcom and Joan Morris [July 20]. We have a show called “Double Date.” They are actually our models, because they really put the American Songbook on the map for classical audiences, so we kind of followed in their footsteps and now we are doing shows with them.

Amy: Bolcom and Morris are a very well-established duo. They are older than we are, so they make us feel like kids, but the idea of “Double Date” is that there are two composer pianists with wives who are singers. We have a really wonderful time performing with them.

You recently returned from working at SongFest in Los Angeles. Tell me about that experience?

Amy: It’s an incredible place. We go there for the last two weeks, and we just work ourselves to the bone, teaching, coaching, watching concerts, and arranging for the kids to do concerts. It’s very intense but wonderful people and wonderful work. I think this was John’s 11th year and my 10th. The quality of the faculty is just ridiculous.

Amy: I love teaching, and things that I learn by teaching I use in my own performances. I am still a singer so I’m still discovering new strategies, and feel that whatever experience I am gaining now in my performances is very useful to my students.

For me, it’s a lovely balance, and overall I feel very lucky to be teaching and performing, because it’s very exciting to help train and inspire the next generation. That’s a lot of what we do at SongFest. We get to work with a lot of wonderful, talented, curious and hungry singers that are coming up. It’s a wonderful thing when you see young people launch. It’s very gratifying.

Do you have any special plans or projects coming up?

Amy: We are going to Ravinia. It is a wonderful summer festival and the home of the Chicago Symphony. They have a very elite program for young singers with recitals and master classes. The singers who have been chosen for that program are doing a whole evening of John’s music, and we are going out to teach and supervise and coach them.

Are you glad you chose musical paths?

Amy: it’s all we know how to do. John and I have been extremely lucky. We have both worked a lot and have been well received and been fortunate enough to make our living doing this for a very long time. It’s pretty hard for younger people to get started, and I want nothing more for my students than for them to have the life that I’ve been able to have.

The intimate venue and well-chosen program prove a good match for the charming baritone in this inaugural matinee.