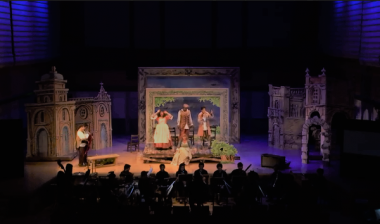 Classic opera is infamous for its questionable source material. Modern composers and librettists therefore look for strong stories to build on. John Musto’s Bastianello and William Bolcom’s Lucrezia (performed together this weekend at the San Francisco Conservatory of Music) draw on unpromising sources but make charming operas out of them just the same.

Bastianello is based on a traditional folk tale: Luciano, angry with his wife for wasting wine, insists that he will not return home until he encounters six people as foolish as she is. Lucrezia undermines a misogynistic play by Machiavelli. Lorenzo and his factotum Chucho lay elaborate plots to enable Lorenzo to sleep with the married Lucrezia. Lucrezia sees through their machinations but goes along , because she fancies Lorenzo. Both operas were staged by Heather Matthews on a faux-Baroque set. Costumes indicated differences of time and place: Bastianello wasset in 18th-century Tuscany, while Lucrezia took place in turn-of-the-20th-century Cordoba, Argentina.

Both scores are highly melodic. In Bastianello, Musto makes onomatopoeic use of the orchestra, creating a world of ticking clocks, bubbling wine, and clopping hooves. The playfulness continues in less literal sections: twittering reeds and woodwinds underline staid vocal melodies, and a character’s pulling on of pants becomes a rollicking dance number complete with a crashing finish. But the score does little to show off the singers’ voices and struggles to effectively marry melodies to words.

In that, Bolcom’s Lucrezia is more effective. The libretto and music seem a natural fit; numbers like “We women” are downright catchy. The zarzuela style and Argentinian setting mean the score is full of tango flourishes, with snappy cutoffs and plenty of brass and tambourine. Those textures add much to this world premiere orchestration. (The opera was originally scored for two pianos.) The new orchestration still has its kinks though, including screeching dissonances that drowned out Lucrezia during her entrance aria. (They were so jarring that I at first took them to be an error by the instrumentalists, but their repetition made me suspect the score was at fault.) The orchestral texture often got too thick for chamber opera and overwhelmed the voices.

Mark Campbell provided the librettos for both pieces, in modern English. Because the operas are too short and too silly to require much in the way of character development or plotting, Campbell is free to do what he does best: turn clever phrases. Cute rhymes abound. It’s refreshing to hear opera characters in period dress  swear and bluntly declare that they love sex. Classic gags appear too — a disguised Lorenzo “speaks German” to an uncomprehending Ignacio by spouting the names of random dishes.

The vocal talents on display impressed even when they weren’t fully polished. Some rough edges didn’t prevent tenor Ricardo Garcia from stealing Bastianello, mostly via sheer acting ability. He was engaging and natural as the narrator (Bastianello the younger) and hilarious as Lambent, a horse with a passion for architecture. These character roles didn’t give him much scope to show off his vocal prowess, but he did that in Lucrezia, wielding sunny top notes with ease.

Mezzo-soprano Elizabeth Dickerson’s Lucrezia was the star of her eponymous opera, combining a mischievous demeanor with a ringing high range and admirable snatches of coloratura. Bass Brandon Bell also came into his own in the second opera; his Luciano in Bastianello seemed stiff and occasionally descended into inaudibility, but the over-the-top role of Chucho in Lucrezia better suited his acting style and plush voice. Other stand-outs included baritone Radames Gil (Lino in Bastianello) for smooth, dark-hued sound; soprano Desirae Gonzalez (Ortensia/Eustacia in Bastianello) for spinning tone and comedic chops; and soprano Katelyn Lewis (Annunciata in Lucrezia) for piercing top notes and dramatic poses.

This double bill is hardly what you’d expect from operas composed a mere decade ago. They don’t seem particularly modern in terms of sound, story, or setting. But who cares? Opera isn’t an exercise in music theory; it’s entertainment. And these operas are great fun.

As Ring fever heats up, S.F. Opera reaches out with surprising and fun new ancillary programs.