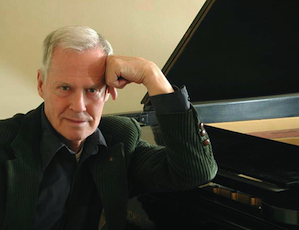 Pulitzer Prize winning composer, author, and tell-all raconteur Ned Rorem, who lives in New York City, turned 90 on October 23. While there is a dearth of local celebrations giving one of America’s and the world’s finest living art song composers his due — the duo One Great City revisited five of his songs and song arrangements in San Francisco’s Old First Church on Oct. 25 — Rorem continues to be performed worldwide. Christianne Stotijn is about to premiere his latest piece, a setting of Shakespeare sonnets titled How Like a Winter, at the Concertgebouw in Amsterdam on October 29. SFCV chatted with Rorem to get his perspective on his life and career.

Well, it’s something that happens to other people, but not to oneself. I always think of myself as about 19. Knock wood, I’m in pretty good health, so I feel like I’ll go on forever, and I don’t object to it.

I’ve definitely slowed in both my prose writing and in my music. I’ve sort of said everything I have to say. Also, ever since the economic slowdown, nobody gets commissions, and I like to write on commission. I’ve said what I have to say, so that’s it.

If somebody paid me to write a string quartet, maybe, or an oboe concerto, or, especially, a song cycle, I would do it. But I don’t feel an urge to do it on my own. I think it’s terrible to ask somebody to write something and not pay for it, especially something that is unique and hard work. So I don’t do it. "To me, all music is a song without words. Music is sung expression."

There’s a quote by you in the album notes to your Piano Album I, played by Carolyn Enger, which just came out on Naxos: “I conceive all music vocally. Whatever my music is written for — tuba, tambourine, tubular bells — it is always the singer within me crying to get out.” Do you consider songs the high point of your oeuvre?

I wrote a lot of songs, although I was never particularly a fan of singers when I was a kid, and not opera singers like everybody else. But I was interested in poetry, and I liked to conjoin the two things, music and poetry. I don’t sing at all myself. But writing songs comes easiest to me. That’s why, when I started writing non-songs, I did it out of discipline.

To me, all music is a song without words. Music is sung expression.

I first interviewed you after Susan Graham’s recording of your songs came out. [Virtually the entire recording is available on YouTube, in sound quite good for the site.] Do you have any favorite recordings of your songs?

I don’t listen to my own recordings very much. I might listen to them once, just to see how bad it is or how good it is. I suppose my favorite recordings are the first ones that were ever done. That was on a big label, I think Columbia. Someone introduced me to the head of Columbia Records, and he said, “What do you want?” When I told him I wanted to do some records, he gave me to a producer, and I made a song record that was very, very successful.

I used five singers, none of whom I particularly knew. Well, I certainly knew Phyllis Curtin and Donald Gramm, but they were good. I guess that’s my favorite song recording, if you can still get it.

[The invaluable collection, which belongs in every song lover’s collection, has been re-released by Other Minds of San Francisco. Take a low-fi listen here.

137 recordings of mine? Oh my gosh. Nobody tells me about these things. I didn’t realize that there were four recordings of this and that. But I’m pleased.

I’m not going to give up so easily. What compositions of yours are you personally proud of?

Those are questions for lay people; I don’t have that point of view about my own music. While I’m most interested in what I’m writing now, I suppose it would be those first song recordings that I accompanied myself.

In your preface to the Piano Album I collection, which was published in 2003, you say that many of the pieces were written for the man you lived with for 32 years, Jim Holmes. You wrote and framed one-page pieces for him on special occasions, and did the same for some of your friends. Did you call him Jim, your lover, or partner?

In front of other people? I guess he was my friend, Jim. I liked that. Saying he was my lover or partner is a little old-fashioned, I think.

He died in January of 1999. If he were still alive, would you have considered getting married, which you can now do in New York?

I would not have. I don’t especially believe in marriage of any sort, but if one gets married, it should be for financial reasons. I don’t think a person has to be coerced into fidelity just because they’re married, so that’s the answer to that question.

Nonetheless, listening to all these pieces you wrote for Jim, and reading your loving transcriptions, I’m curious about how you choose to express your homosexuality in music. Someone like David del Tredici makes a big point of writing gay pieces. Have you ever felt pulled in that direction?

No, I come along before David. I never denied what I was, but David is just making a political point, I think. I like him, and I know his music, but I can’t make a statement other than a musical statement.

How does no longer writing feel to you? Do you have creative urges that spring up in you?

No, I don’t. If someone commissioned me to write something, I would think about it, but I don’t have the same urge that I did when I was a kid, or up until about 10 years ago.

"If someone commissioned me to write something, I would think about it, but I don’t have the same urge that I did when I was a kid, or up until about 10 years ago."

So how do you fill your days, dear man?

Well, I eat and I watch television. I don’t read classics anymore; I’ve read everything. I’m pretty well educated, but I don’t somehow need all of that. I’m going to a concert of my music at Bargemusic tonight [October 18].

Are you looking forward to it?

I hope [the performers] are good. I’ve been known to walk out of concerts of my own music. I did it once. I said, ‘I don’t have to sit here and listen to this.’ It was unthinkably awful. But I don’t suppose it will be that way tonight.

Those were all students of mine, mainly at Curtis. After teaching for several years at Curtis, I took over David del Tredici’s class at, I think, Yale, and they paid about five times more than Curtis did. But I can’t teach anymore. The energy it takes I need to give to myself, and to my own music. But I taught pretty well. I’m pretty good because I think I know who the composer thinks he is or she is, and I try to make that emerge.