Pamela Z Unveils a New World of Sound at Zellerbach

In a long-distance interview conducted from an echoey gallery in the Museum of Contemporary Art in Rome, Pamela Z’s rich, melodious voice on the phone rises as if from a submarine. Random oceanic, watery roars and eerie, metallic creaks and moans overlap the Bay Area artist’s words and occasional laughter that can only be described as deep and bubbly. Three months into an 11-month fellowship as a winner of a prestigious Rome Prize from The American Academy in Rome, the electroacoustic composer and performer spoke about the dizzying impact of working immersed in a culture that seamlessly layers centuries-old architecture with ATM machines, LED lights, and modern vehicles. Dozens of languages spoken on the street provide provocative listening opportunities for an artist long-fascinated with human speech, spoken word patterns, and phonetic texture.

The fellowship allows Pamela Z to develop new solo material in a project involving an intermedia song cycle with the working title Simultaneous. The multisectioned piece will be created using familiar techniques and source material — real time electronic processing and gesture control, voice, and video. Simultaneous explores, according to the project statement, “simultaneous translation, the mysteries of synchronicity, and the folly of this culture's preoccupation with multitasking.”

Perhaps serving as new music’s chief multitasker, minus the folly, Pamela Z has made three return trips to appear in the United States since moving to and setting up her studio in Rome. A fourth journey brings her on Dec. 14 to Zellerbach Playhouse courtesy of Cal Performances to join the Grammy Award winning Eighth Blackbird. The evening features works by Nina Shekhar, Viet Cuong, Fjóla Evans, Holly Harrison, Andy Akiho, Jonathan Bailey Holland, and the Bay Area premiere of Pamela Z’s newly commissioned work, Ways of Looking, and an iteration of two solo works, Quatre Couches and Badagada. The piece for Eighth Blackbird combines live acoustics, fixed media track, and live-processed vocals. It was developed from sentences, phrases, words, syllables, and phonemes gathered in interviews with six members of the ensemble.

What can you tell us about the new work that explores the human voice in four movements (titled “Looking,” “Name,” “Um,” and “Very”)?

Unlike some of my other recent work, it’s all audio. There’s no video. I used a method that has become kind of my MO, taking prompts I develop and use in interviews when there’s even something vaguely known about what that piece will be about. I interviewed almost 30 people for the Kronos Quartet piece (And the Movement of the Tongue, 2012). It was a piece that was about speaking accents.

In this case, I interviewed only the six people who are members of the [Eighth Blackbird] ensemble. I wasn’t one-hundred percent sure of what I wanted the piece to be, but I knew I wanted to play with the sounds and words of their voices. I asked them who they studied with, the teacher who stood out in their memory. Then I asked them to describe the person physically. I was basically trying to get them to talk about their instruments and people who meant something to them. I pulled out sonic fragments from all of these digital sound files and listened for words and phrases that sounded musical to me. Sometimes it was just a word or syllable. I built a library of clips and named them with the musician’s initials and “I Don’t Know,” or with the initials and then the content of what the sound was. I ended up with hundreds of little sonic clips.

In Pro Tools [music software] I pulled layers, almost like sculpting. There’s almost always a question or two [asked in interviews] where everyone says the same thing. From that, I can create a chorus, even though they were not in the same room when they said it.

For “Um,” I came up with what this section would be based on using little interstitial placeholders like “uhs” and “ums.” People tend to sustain those so the pitch becomes musical, melodic.

For “Name,” I asked everyone to say their name as part of the sound check. But throughout the interview they said other people’s names too, so I ended up with a compendium of them saying people’s names and descriptors. I built a collage out of all of those elements.

Gradually, I noticed how often they used the word very. I built a movement with phrases in which they say “very this” and “very that.” I pulled from the Occupy score I made for a dance work (by choreographer Stephan Koplowitz). I took their speaking voices and transcribed their melodic material into actual notes — but I was at the same time thinking I wanted to do something rhythmic, with motion to it. I suddenly heard a movement from the Koplowitz piece and just felt it fit. I realized the instrumentation of that work was perfect, including a piano place I had played even though I’m not formally a pianist. I was thrilled with someone of Lisa’s caliber playing that part. (Eighth Blackbird pianist Lisa Kaplan.)

I built the original score with MIDI piano and MIDI cello and invented sounds I made with found objects. For Eighth Blackbird, I scored it all out for it to be actual piano and cello. The weird sounds — I figured out how they could be percussion. I just called Matthew (Duvall) and asked him how he might make the rattling, grinding, crunching sounds. He took stones and put them on the head of a drum and recorded it. It’s bizarrely like the sound I had made originally.

Does the work include the ensemble using their voices live, maybe layered and improvised, or just recorded?

When they first commissioned me, I was interested in getting them to use their (improvised) voices in the piece in one section. Instead, I ended up notating it and it’s very prescribed, even as they perform their own speech.

What can you say about Quatre Couches and Badagada? Why are they good companions to the new work?

I chose the other two pieces that I’ve glommed together into one. I thought it was a nice pairing to have something in which I’m using my own solo voice in a layered way. Quatre Couches is four layers. I use my live processing with a gesture controller to manipulate the layers I make in real time. The second work, Badagada, is a very old piece with me singing jabber-type syllables that become a rhythmic bed over which I sing melodically.

While in Italy, you are focusing primarily on solo work. What is the significance of that choice?

I had a few years of intensive work where I had so many commissions from chamber ensembles, dance companies, and soloists. It was wonderful and I’m not complaining, but the extreme deadline pressure and making work that was to be performed by other people and ensembles — it left me with a lack of new solo material. At the same time, I was doing all this work, I constantly play solo concerts. So every time I played, it was the exact same set of music. I began to feel nervous people would think I’m never making new work. I got excited when I got the Rome Prize about the chance to have a long residency to make new work on myself. I still have residual commissioned work, but I feel I now have dedicated time to work on this new piece.

What have you discovered thus far?

It’s taken me a while to get settled in, feel set up in my studio, so I’m only just getting started. When I came here I had the proposal and was excited to think about multiple languages being spoken simultaneously, but what I hadn’t thought through is one of the strongest attributes of Rome: There are things that are centuries old operating at the same time as modern things. If there was ever a layered place, it’s Rome. That’s having an inspirational impact.

And the environment, living with other artist fellows, scholars of archeology, medieval studies, visual artists, designers, historic preservationists, and other things; it’s amazing to be around these incredibly smart people. I’ve been interviewing them and I’ll use fragments of their voices for my piece.

What other voices or sounds are you listening to while traveling and at work?

I hear a lot of Italian on the street and my studio is out in a garden, so I hear birds. There are dozens of parrots who flock into the tree by my studio. They squawk and make noise, so I hear that. I also go to opera, theater, and dance to get inspiration from them. But the new layers are not just heard, but seen in culture and life: machines, modern cars, digital device screens, and LED lighting. It’s visually very layered and the sound layers come mostly from languages spoken. Oh, and the police sirens are very, very different from ours.

In a separate interview with Eighth Blackbird’s Lisa Kaplan, the ensemble’s pianist and co-artistic director says Pamela Z in her work consistently finds the inherent music in speech patterns. “The inflections and pauses; she’s able to notate that on a staff. It’s the essence of the entire piece she’s made for us. Other [composers], like Steve Reich, have percussion as their main approach. Pamela finds the lyricism in the voice.” 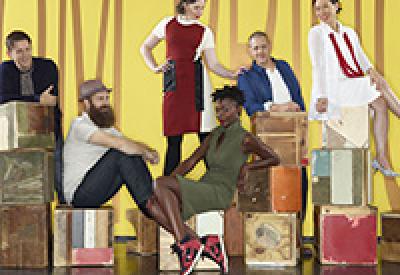 The multimedia pioneer’s complex layers of sight and sound may seem off-the-cuff, but there’s a world of thought and preparation behind each performance.