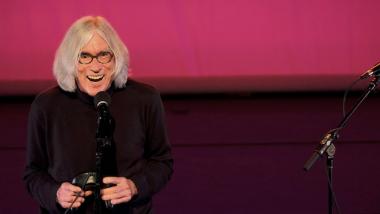 While words may have deep meaning, they necessarily also just sound like something. And with an onomatopoeic word such as a bee’s “buzz,” the sound conveys the meaning. Somewhat similarly (albeit more abstractly), and situated somewhere between experimental music and traditional poetry, you can think of “sound poetry” as a genre in which sheer sound helps to convey meaning — even when, taken in isolation, the sounds may seem as nonsensical as a baby’s syllabic babbling.

Now in its 23rd season, San Francisco’s annual Other Minds festival has both a mission and a proud history of programming unconventional new music. But since the festival’s executive and artistic director, Charles Amirkhanian, sometimes writes sound poetry himself, he likely had a soft spot for this year’s theme. On Saturday evening at ODC Theatre, the six-day “Sound Poetry: The wages of syntax” concluded with a program of works by a diverse roster of artists including Pamela Z and Jaap Blonk. With the contributions ranging from whimsical to provocative, these works demonstrated that sound poetry rails against facile categorization.

The remaining artists all performed live. Composer Beth Anderson described her set of seven pieces as “text-sound,” meaning “the use of words and phonemes to make a kind of percussive vocal music.” To accentuate its percussive qualities, an actual drummer, Michael Jones, accompanied her.

Her poems ranged from playful to profound. “Crackers and Checkers,” for instance, played with combinations and permutations of consonant clusters. And while Anderson wrote most of the numbers in the 1970s and 80s, her most recent was arguably also the weightiest: “Killdeer and Chicory” (2005) reflects upon dark death and bright flowers.

The program opened and closed with sets by two artists whose greatest commonality might be that they are both singularly inimitable. To start, Pamela Z performed five short pieces. While these five sound worlds vary drastically, her underlying compositional technique remains similar: Using her own amplified voice, sound samples, and electronic live looping, she (with the help of several Macs) creates complex layers of sound. To me it looks like marvelously mystifying wizardry, but lest Pamela Z alone should fail to provide sufficient visual stimulation, some numbers were also performed in front of video projections.

For example, the nostalgic 33 Arches is from a larger collaboration with video artist Carole Kim about the sociohistorical impact of bridges. A live, cello/viola/trumpet/trombone quartet joined Pamela Z, and they performed in front of footage of an Iranian bridge that the recorded voice of an expat was describing. For the concluding number, Other Rooms, I think the projections showed ambiguous, concrete ruins. This fascinating piece is about memory and its (questionable) relationship to truth; it reminded me of reading W.G. Sebald.

At the program’s other end was a set by Jaap Blonk, a Dutch composer and performance artist. Half-joking that few can comprehend Dutch, he began with two poems in a made-up language so that listeners could hear sounds reminiscent of his native tongue without compunction about failing to understand. Nonetheless, the second was certainly a slurry, swaggering drinking song, which Blonk’s stumbling around the stage helped to convey.

Blonk’s other numbers included a study on the sonic possibilities of the letter R, a solo for “Cheek Synthesizer,” and an homage to French avant-garde theater artist Antonin Artaud. Twice in his set, he uttered a line close to “What the President might say and do.” In both cases, he repeated the line several times, making it grow increasingly garbled and disintegrated, as though to suggest what the President says and does tends to fall apart. The second instance ended with Blonk crying like a baby and running off the stage.

He returned for an encore, leading the audience in a call-and-response number that let listeners attempt some of his vocal techniques for themselves. The audience enjoyed this interactive ending, and seemingly also this whole finale: We were left, in a word, abuzz.

The festival's third day questions how we communicate when sounds and meaning are divorced.

The multimedia pioneer’s complex layers of sight and sound may seem off-the-cuff, but there’s a world of thought and preparation behind each performance.