The Qadim Ensemble Celebrates Jewish Music of the Middle East

In this time of political turmoil and mistrust in the world, particularly in this country concerning anything to do with Iran and the Middle East, artists are still finding ways to bring people together, celebrating the cultures of America’s minority communities.

The Qadim Ensemble, based in Berkeley, celebrates the synthesis of the music and cultures of the Middle East, blending Arabic, Turkish Sufi, Hebrew-Yemenite, Armenian, Greek, Ladino (ancient Judeo-Spanish), and Moroccan modes, motives, and rhythms.  Founded in 2006, their second album, Eastern Wind, released in 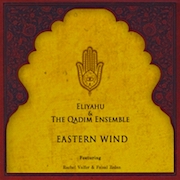 2009, reached No. 7 on Billboard’s World Music charts, and presented a blend from around the Middle East. Their instrumentation, repertoire and unique style emerged from the personal journeys of each of its cofounders, vocalist and oud player Rachel Valfer and multi-instrumentalist Eliyahu Sills. Those journeys are revealed more than ever on their newest recording (their third), Open the Gates, released in January, which celebrates their mutual Jewish Middle Eastern heritage. They will be performing with their group on Sunday, Feb. 9 at Ashkenaz in Berkeley.

The new record includes songs in Hebrew and Ladino, and several piyyutim — Hebrew poems that were originally sung or chanted only at religious services. Valfer explained that in recent years young people have led a resurgence of interest in this type of music. “There were some nightclub acts that became very famous in the pop world and now there’s this huge revival of piyyutim,” explained Valfer.  “It has crossed over into America, but I would say it probably started in Israel — young people going back and researching, digging up, and finding old liturgical poems from all around the Middle East, Central Asia, and North Africa, and starting to replay them in an artistic way — with instruments and beautiful arrangements. So now there’s a huge body of those selections as well as artists who are recording and performing them.”

Valfer grew up in Berkeley and was exposed to klezmer music at an early age at home (her mother’s side of the family were klezmer musicians), and at school where one of her teachers brought in and taught Ladino and Yemenite songs. Valfer said her heart just soared when she heard them. When she was 21, she moved to Israel where she learned to play the oud, studied vocal techniques, and learned the intricacies of maqam — the music scales, modes, and motives of traditional Middle-Eastern and some North-African music. “That was where my musical education really started,” said Valfer. “There was this wonderful little school in an old neighborhood of Jerusalem that gathered teachers from all over the Middle East and Central Asia. There were Palestinian and Persian teachers — some Jewish, some Muslim, some Christian. It was this real melting pot, and in the context of that school, nothing mattered but the beauty of music.”

After nine years, due to the problems of living in a country constantly at war, she decided to return to her native Berkeley, where she joined Za’atar, a band specializing in Middle Eastern Jewish music, and that was where she met Sills, who later became her husband.

Sills, who grew up in Boston, became enamored with music from a very young age.  His family sang a lot, especially around the Passover Seder table, which influenced him strongly. Both his father and his uncle were musicians, and they helped foster his love for music.

Initially he played piano and was obsessed with soul music, but in high school he took up electric bass and joined the jazz ensemble. Switching to standup bass, he moved to New York City to continue his studies at the New School of Jazz. It was there, while “playing music that was predominantly developed by African-American people,” that he began to wonder about his own cultural roots. It was also during that time that he started listening to John Coltrane and Pharoah Sanders, which included a strong spiritual element and exploration of music and culture from other parts of the world, especially India. This inspired Sills’s playing to become freer and more improvisational.  It also rekindled his interest in his own heritage. “During my bass solos, I started to realize that the melodies that were coming out were very connected to the melodies I grew up singing around the Seder table, and when I realized that, it was a revelation.”

Sills decided he needed to take break from city life, and moved to a holistic retreat center in upstate New York. It was there that he picked up a flute, and instantly felt a very strong connection. He bought an Indian bansuri (bamboo) flute and taught himself to play, and then he discovered the ney. “I heard a recording of a Turkish ney player, the Middle Eastern [end-blown] reed flute, and it blew me away,” he exclaimed.  “It struck me as some of the most powerful and divine music I’d ever heard.” Over the next few years, he dove deeply into both, studying with masters in America, Turkey, Morocco, and Israel.

After moving to the Bay Area, Sills’s life changed forever.  He joined Za’atar where he met Valfer, and they formed a kinship, both musically and romantically. Married now for 10 years, it certainly seems like some kind of kismet for both of them.

The Qadim Ensemble’s repertory is taken from the folk music of a variety of countries and regions including the Middle East, the Caucasus — Armenia and Azerbaijan — North Africa, Turkey, and Greece. “It’s easy to form a program that contains some of these different styles, or do a little bit of fusion in between them because they have the same musical understanding in the big picture,” said Valfer. She explained that they are flexible within those genres — they might use a Persian instrument in a Middle Eastern piece.

“The way some of these courtly classical traditions formed a thousand years ago or more, was through fusion,” she continued. “And even within those courts, they were hiring musicians from other lands, so in the Persian courts there were a lot of Indian musicians. Their modes might be a little bit different, and they might have different motifs, but the way it’s structured is very similar.”

Sills, who wrote two of the pieces on the new record, plays several different instruments in the group. “I am largely an improviser, with my background as a jazz musician,” he said. "One of the main roles, both as a ney player and as a bansuri player is to improvise.  In Middle Eastern music, the ney learns the melody and often doubles it, but also improvises around the melody, behind or around the singer.” 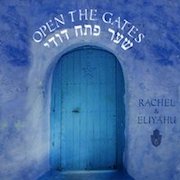 The text for the songs “are all devotional poems and are expressing either a longing for the divine or a longing for homeland, which kind of comes to the same thing,” said Valfer. They chose to name their new album Open the Gates, based on the chorus of one of the songs, “Open the Gates my Beloved,” which is sacred and devotional. “It’s asking God to open the gates of the heart so that the divine can inhabit,” explained Valfer.  “And that’s something that happens to us through music. This is the only music that we’ve made that is just Jewish material, and it also expresses our love for one another, so we are opening the gates of the heart and we are doing it through music.”

Sills and Valfer both agree that now it is more important than ever to demonstrate the power of music to bring people of different cultures together. “When people come together to play and appreciate music from across political divides, it feels really beautiful and incredibly healing,” said Valfer.

“All these different ethnic, cultural and religious groups have been living right next to each other for hundreds and thousands of years so sometimes their music is almost indistinguishable,” said Sills. “We have had many experiences at our performances of people coming up to us in tears — people from all different backgrounds — Jewish, or from Saudi Arabia, Turkey, Azerbaijan, or Iran. They are feeling so moved to be able to hear music of these different cultures played side-by-side with real care, love, and authenticity in this country. To see that beauty when so much of what they see on the news is a very different story, is very important.”

Correction: Rachel Valfer's last name was misspelled in several instances in the article as originally published.