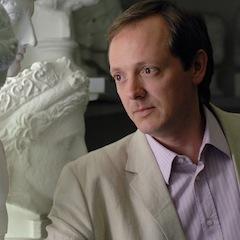 In the rarefied world of countertenors, where David Daniels reigns as a de facto rock star of sorts, and Philippe Jaroussky dances about as his younger rival to the throne, English countertenor Robin Blaze has made his mark in the world of Bach and oratorio. His authority derives less from bravura displays of virtuoso technique or macho posing than from singing of rare grace, poise, economy, and sweetness.

In an extended interview that included copious amounts of laughter and storytelling, Blaze reflects on his forthcoming appearances at the Carmel Bach Festival, where he sings music by Purcell and Bach (July 19 and 26), and in highly anticipated performances of Bach’s Mass in B Minor (July 14 and 21) and Handel’s Alexander’s Feast (July 15 and 22).

Let’s bust through one myth about countertenors. I believe I detected children and wife in the background.

Yes. You’re quite lucky; this about as quiet as it gets around here. We’ve got them banished to the garden.

One of the things I really enjoy about your voice is that you don’t put on airs. Your singing is as sweet as can be: direct, simple, and unadorned. Your art lies in its apparent artlessness, if I may be so bold.

I find that very flattering, because it completely reflects my own opinions about the music that I sing. Certainly in the era of pre–superdiva Handel castrati, you have musicians who are very much in service of the music. The idea of the ego or the super personality over the music, in my opinion, has to be handled quite delicately. I think if you’re distracted by the performer too much, in a lot of the music I sing, then the performer is slightly losing their way. They’re not really serving the music and getting the most out of it.

I would distinguish the repertoire I’m singing from some of the stage stuff by Handel that I do. There you have another kettle of fish — the beginnings of the big singing ego, and characters who have to be really inhabited. In those cases, the personality of the singer should really be impressed upon the music. But with the more spiritual elements of the music that I do by Bach and church composers, the personality of the singer can obscure the route to the heart of the music.

I confess the Purcell’s music has never drawn in as much as Bach’s and Handel’s. Please tell me what I’m missing.

Like any style or facet of music, music from Purcell’s period demands that you work on it. You have to get your grips on it and become familiar with the idiom.

I’d suggest that the key to enjoying Purcell is a matter of exposure. For me, the enjoyment has something to do with the charm of the music, and the way in which sometimes quite ordinary text is so beautifully understood and set in a very knowledgeable and very sympathetic way. You can really sense Purcell’s delicate and charming involvement with texts, and his understanding.

You go a long time in the U.K. after Purcell without people setting English in such an idiomatic way. To be honest, the person who is closest to him would be someone like Benjamin Britten. I think that after Handel, who writes English as a foreigner, you go for hundreds of years before you find someone who enjoys the subtlety and detail of English, and English setting, in the same way.

What led you to choose the particular Purcell that you’re singing?

I wanted an opportunity to sing the songs I really love, and to include a collaborative presentation with the orchestra. A couple of the songs I’m doing are these absolutely beautifully ritornello songs, that usually repeat a four-bar ground bass line that goes in a little cycle, then repeats over and over again.

The idea of the ego or the super personality over the music, in my opinion, has to be handled quite delicately.

These songs encapsulate what’s “genius” about Purcell. He’ll write the song over the bass ground, and you’ll get a sense of the melody. Then, as the voice finishes the song, usually four- or five-part strings take over and kind of repeat the same patterns, like a theme and variations, but with extra complexity and more insight into the idiosyncrasies that can be eked out of the patterns of the ground bass.

What Purcell does is incredibly sophisticated. I love that; I love the little changes, the understanding of the small gestures in the music. I think it’s beautifully expressive and actually quite accessible.

How many times in your career have you sung the Bach B-minor?

A lot. It’s one of the pieces I get asked to do most often.

I come to it with a sense of great humility as one of the great artworks of Western civilization. I think that’s not too bold a statement to make. If you were talking about great canvases by the old masters, I think you’d be looking at some of the famous Leonardo da Vincis or something like that. I think the B-minor is one of the 10 greatest pieces of artistic endeavor of Western civilization. I never have my enthusiasm dimmed, nor do I have my sense of privilege for being part of it lessened. It’s a piece for which repetition cannot diminish its genius.

Has your approach to the Mass changed over the years?

It changes with every conductor that I sing it for. As one of the arias soloists, I’m only involved in three of the movements in a Mass that’s 2½ hours long, at least. So I respond to the overall arch that’s presented through the chorus movements. Every time there’s a different set of performing forces, the artistic thrust of the piece differs.

Some things are slightly consonant. The Agnus Dei always has a particular sense of highlighted repose, as if the moon were coming out from behind the clouds. All the excitement, effervescence, and joy that’s present throughout the music during the rest of the evening suddenly stops, and you have this frozen moment on the water, if you like, where you see the halo of light from a place of stillness. That perfect quality of very sustained, intimate forces creates a very different, expressive moment from the rest of the evening, and is probably constant in every performance I’ve done.

I think the B-minor Mass is one of the 10 greatest pieces of artistic endeavor of Western civilization.

Pronouncements such as “This is one of the great works of art” can sometimes be off-putting for people who don’t share those feelings. What is so great about the B-minor?

It is true that labeling works as “masterpieces” can sometimes be a bit off-putting, because our responsibility is to translate our enthusiasm into music. Rather than browbeating the audience to attend — “this is great, and you must enjoy it!” — perhaps the best ways to explain this is that the B-minor Mass is rather individual in Bach’s output, in that either it or one of the Passions could stand as the culmination of his art. But the thing about the B-minor Mass is that it was not to be performed in a church; it was written to impress an employer. [Bach] said it was the essence of his compositional technique. That’s an extraordinary idea — it’s like putting your signature on a score and saying, “This is me as a composer.”

In terms of musical ideas, it’s rare that you get to hear such a thread of intensity translated over 2½ hours without any dramatic dialogue or narrative; it’s pure musical essence that can take you on a journey without a plot, characters, or subtext. There are musical characters and a musical subtext, but it’s not an opera, narrative, or song cycle; it’s just a musical form, like a symphony, in a way. And it’s kind of epic in Mahlerian terms, which is unusual in the Baroque era. The musical complexity leaves me astounded every time I hear it.

What music that you haven’t performed so far would you love to perform?

There are two answers to that. The sensible classical singer, which in many ways I am, would love to do a little more Handel opera. I’ve probably done a dozen roles over the years, hand in hand with the oratorio and concert work I’ve done. I used to do more of it when I was younger, but when we had the kids, the idea of going away on these big, long contracts was difficult. Now that the kids are a bit older and going to school, it’s more possible.

The other thing, which is a bit more telling, perhaps, is that I would love to work with someone like Björk, the Icelandic pop musician, or someone like Kate Bush. Kate Bush has a new album out, and she uses a countertenor on it. I have to say that I am incredibly jealous, because it was a young student who studies at the same place that her son goes to school. I would have lost a limb for the opportunity to sing on a Kate Bush album.

I would have lost a limb for the opportunity to sing on a Kate Bush album.

So you don’t want to do the Fauré, Beethoven, and Berlioz that [countertenor] David Daniels has done?

When you’re not singing countertenor falsetto, are you a tenor?

I’m a “lazy tenor.” How does that sound? I’d like to think that I’m one of those singers whose chest voice seamlessly goes up into the falsetto. It’s not too heavyweight to blend into the falsetto. So by keeping it as a lazy tenor, it becomes a resource for my countertenor singing.

So here you are the beach. What would be a choice from Bach and/or Purcell, and what would be your third?

For the Bach, I’d go with something like the effervescence of one of the Brandenburgs. I like the idea that it’s town music — music of the people — meant for people to enjoy. It’s not too rarefied. It goes with a sunny day.

Purcell is a tough one. I would maybe go with one of the string sonatas. I love his four- and five-part string sonatas. They’re quite intimate, so you’d have to listen closely on the beach, but they’re beautiful music to let wash over you as the tide comes in.

The last one would be one of the Brahms String Sextets.

Bless you. I just love the first movement of the Opus 18. Nonetheless, you are being lazy, because you’ve given me everything but a vocal piece.

Well, that’s because I’m on the beach! But if it’s going to be vocal stuff, then it would probably be a Handel aria. I know it’s a bit cheesy or corny, but something like “Ombra mai fu.” I could just enjoy the shade of a palm tree and drift off.