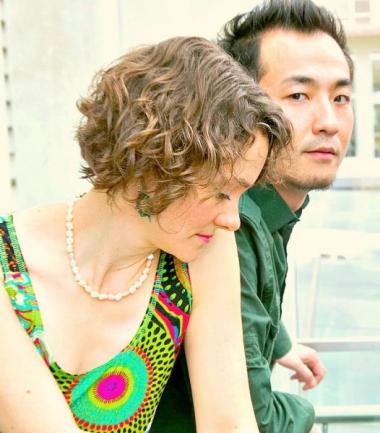 Four hands, one-piano duets are unique alliances. An extremely intimate form of musical collaboration, it requires two people to not only synchronize rhythmically, but also creatively, intellectually, emotionally, and physically. It’s a type of partnership that doesn’t appeal to many pianists, but it turned out to be a glorious opportunity for Keisuke Nakagoshi and Eva-Maria Zimmermann, who joined together in 2009 to form the San Francisco-based piano duo ZOFO. The name is derived from an acronym, meaning 20-finger orchestra.

The two came together through a bit of serendipity. Japanese-born Nakagoshi was preparing for a series of concerts in San Francisco when he had an accident that seriously injured one of his hands. Deciding to be the page-turner for his replacements, he was particularly impressed by Swiss-born Zimmerman. Nakagoshi had recently come across an arrangement of The Rite of Spring for four-hand piano that he really wanted to try out, so when he had healed enough, they got together and worked on it. Now, ten years, four albums, and two Grammy Award nominations later, ZOFO has been creating a buzz at their performances in concert halls worldwide. They will be performing the music from their latest project, ZOFOMOMA, which combines 15 newly commissioned works with pieces of art projected above, at the Ann E. Pitzer Center at UC Davis on Friday, Feb. 14.

Zimmermann, who is Swiss and also spent some time growing up in Indonesia, came from a musical family and began her piano studies at age 5. Based in San Francisco since 2000, she has appeared as a soloist throughout Europe and the U.S., as well as at festivals worldwide. A former teacher at USF, she currently teaches music at the Nueva School in Hillsborough, which was founded by Sir Yehudi Menuhin.

The pair display amazing energy when they perform together. Constantly in motion, with four hands crossing over, reaching around, up, down, and over the keyboard, their delivery is filled with a vibrancy and vitality that is fresh and exciting.

I caught up with both of them recently by phone, and learned about how and why they got together, what it’s like to work in this format, and what to expect at their upcoming concert at UC Davis.

What inspired you to form a four-hand piano duet? Had you ever done that before?

Eva: I had one for a very short time with a friend in Switzerland, but it didn’t go anywhere. Playing piano four hands was always such a fun thing to do.

Keisuke: I think what got me going on this piano duet was because it is so different from other forms of chamber music. It’s usually piano plus something — like piano with a string trio or in a quintet. But two pianists together is really interesting because you are both equal — there is no sense of one being behind the other, or that one is accompanying the other person. And that was very attractive to me.

What are the joys, and what are the challenges of working together like this?

E: When we sit on that bench together and play, I sometimes feel a little like I did when I was in school. I would sit next to someone fun, and we would do fun “unallowed” things during the lesson. You feel like you are in this crime together.

How do you prepare the choreography? It looks so difficult.

K: Most of the time the big choreography is done by the composer — there are instructions, and we try not to bump each other. There are a few choreographies that we came up with on our own and suggested to the composer.

E: The crossing always has to make sense. If it doesn’t, then I don’t want to do it. There needs to be a reason. In The Rite of Spring, which is an arrangement by Stravinsky himself, we have this crazy reach over at one point, and we stay like that for two or three pages. But it totally makes rhythmical sense, because one person does all the triplets while the other person does the sixteenth notes, so it’s more solid this way.

Does it take a lot of rehearsal to learn the crossovers?

K: That’s basically what rehearsal is for, to figure out the choreography. We have to be aware of the other person’s hand or arm or leg or body. This is our tenth year playing together, and we have gotten used to it, and are getting better at imagining the presence of the other person when practicing on our own.

Is there a lot of music written for two pianists on one keyboard?

E: There’s a lot of Schubert and Mozart, and a lot of transcriptions of symphonies, Romantic and impressionist orchestra pieces that are written. People used to play them together just for fun before recordings were invented. But when people started having gramophones, then they could have this music at home without having to play it themselves, so that was the time when many composers stopped, and only a few were writing for piano duets.

How did the idea and inspiration for ZOFOMOMA come about?

E: The idea came from Mussorgsky’s Pictures at an Exhibition, and then we had the idea that we would have our own paintings and our own composers for each painting. The promenade pieces in between are based on that piece, and were written by Keisuke.

K: We were looking at the whole concert as one suite, as opposed to a bunch of different pieces. And we thought that was a great way to program new pieces. Before ZOFOMOMA, we played this concert called ZOFOORBIT — music all based on outer space. It is kind of the same concept, with interludes from one piece to another.

E: One big theme that ties everything together makes it easier to present new pieces, because new is always challenging. People need to have something to hold onto, so they can hold onto the theme. Even for people who don’t like the music and don’t like the painting, they still get something out of it because they can make the connection between the two, and that would be their own thing.

What do you think is your special trademark that makes you stand out?

K: There are not many piano duos that only focus on one piano, four hands. A lot of piano duos also play two pianos, so I think that makes us a little more unique than the other duos.

Any future plans for recordings or projects?

E: There are two new big projects, two piano concertos, one of which is finished, and will be premiered probably in 2021 by Professor Pablo Ortiz [a professor at UC Davis]. And then another concerto is about to be finished by Carl Vine from Australia that might be premiered in 2022.

You two have a sort of musical marriage. What makes it work so well?

K: We are very different pianists, and I like it because it makes me work. I am a bit lazy so it’s a good thing.

E: I think you just have to let each other be who you are, and deal with all the good and bad sides. You can’t change each other — that’s it.

Correction: Eva-Maria Zimmermann began her piano studies at age 5, not 17, as was originally published.

Anderson and Roe Stick to Classics

There are fireworks aplenty without the rock and pop.