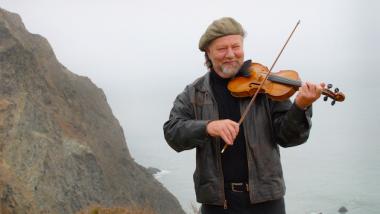 Alasdair Fraser: Reeling in the Years

The realm of traditional Scottish fiddling might seem like a small corner of the far-flung Celtic archipelago, but the resurgent style plays an outsized role on the world stage. The music’s far-reaching impact is due largely to a decades-long campaign by Alasdair Fraser, a master fiddler from the Scottish Lowlands who’s long called the Gold Rush-era boomtown Nevada City home.

A performer, educator, and cultural activist, Fraser has nurtured several generations of string players at his fiddle camps, musicians who’ve distinguished themselves in various kindred Celtic traditions, jazz, bluegrass, old-time music, and genre-bending acoustic hybrids. But his influence extends far beyond the bandstand. In kindling a revival of traditional music at home, he’s provided a rousing score for Scotland’s rediscovery of itself. With Brexit perhaps opening a window for another referendum on Scottish independence, it’s no exaggeration to say that the fate of nations turns on a reel.

I caught up with Fraser just before he flew back to Scotland for the massive Celtic Connections festival in Glasgow, “where there are 16 venues sold out every night for three weeks,” he said. “It’s nuts! The arts scene is vibrating incredibly healthily. When I opened the fiddle camp on the Isle of Skye 30 years ago people were ignorant and a little scared of their own tradition, made to feel inferior. We breathed life into these old tunes and dances. There are so many people involved in this world now. We have an official Scottish-music course at the Royal Conservatory in Glasgow.”

Fraser has led the way with his own music, which radically reimagines the traditional repertoire in the context of a stripped-down duo with cellist Natalie Haas. Opening at Berkeley’s Freight & Salvage on Feb. 6, he returns to California for a series of concerts marking the 20th year of their musical partnership. They also play McCabe’s in Santa Monica on Feb. 9, Santa Cruz’s Kuumbwa Jazz Center on Feb. 12, and finish up at The Sofia in Sacramento on Feb. 13. And he’s back May 15–17 for three concerts with the San Francisco Scottish Fiddlers.

Fraser and Haas recently recorded their sixth album, a project that documents the next step in their musical journey. They’ve spent much of their time together distilling traditional tunes within intricately arranged medleys. Haas, a Juilliard graduate, employs an array of techniques to evoke the sounds and textures of rhythm guitar, harp, and double bass. At the same time, she plays thick harmony parts, counterpoint lines, and melodic leads that make the duo sound more like a quartet. They still explore the traditional pieces, but they’re increasingly adding their original tunes into the mix.

“It seems like a natural evolution,” Fraser said. “For many years we had this approach where we go back to the old well and drink from that and cherish the traditional fiddle music. To complete the equation, you have to ask questions. We’re questioning form, creating more through-composed pieces, but rooted in the dance forms that we know. We’re casting a wider net too, bringing in Scandinavian and Baroque ideas. We’re writing stuff that’s challenging for each other.”

Young players who attend Fraser’s Sierra Fiddle Camp in Nevada City, now in its 15th year, or Valley of the Moon Scottish Fiddling School in Boulder Creek, which started 36 years ago, get exposed to a similarly expansive array of traditions. Over the years the faculty has included string luminaries such as Darol Anger and Liz Carol, Bruce Molsky and Laura Cortese, Martin Hayes and Hanneke Cassel. In many cases, the instructors started at VOM as students, like Natalie and her younger sister fiddle Brittany Haas (who performs in the acoustic quartet Hawktail with Punch Brothers bassist Paul Kowert, guitarist Jordan Tice, and mandolinist Dominick Leslie at Michael’s on Main in Santa Cruz Feb. 15 and Freight & Salvage Feb. 16).

Haas, who grew up in Menlo Park and now lives near Boston, started attending VOM in 1995 at the age of 11 because it was one of the few fiddle camps that included cello. While not particularly familiar with Scottish music at the time, she was drawn into VOM’s tight-knit scene and fell in love with the tradition. “That’s where I found my musical voice,” she said. “It’s an amazing community that draws people from all over, all backgrounds, ages, and walks of life. People from many different traditions show up, bluegrass, Irish, old-time, Québécois. It started out in 1984 in a more Scottish/Celtic way, but old-time, jazz, and blues fiddlers came to teach, like Evan Price, Matt Glaser, Bruce Molsky, and people from all over the Celtic world, Cape Breton, Galicia, Brittany. The list goes on.”

It’s hard to overstate the VOM’s creative repercussions. The ranks of the acoustic music world are filled with Fraser’s former charges, including Hanneke Cassel, fiddlers Alex Hargreaves, Laura Cortese, and the siblings Tashina and Tristan Clarridge, who launched their own string conclave, the Mt. Shasta Music Summit. In the Bay Area, San Francisco-reared Cullen Luper is another rising force who started attending VOM at seven. Now 17, he can be found Monday nights at Mr. Tipple’s and Tuesdays at Le Colonial playing with Hot Club of San Francisco guitarist Paul Mehling’s Gypsy swing combo Le Jazz Hot Trio (he’s also an accomplished jazz pianist). Mehling connected with Luper as a VOM faculty member. While Luper is focusing on jazz and classical music these days, Fraser’s camps opened up a world of musical investigations.

“My first year at Sierra introduced me to Galician music through Kevin Carr and Castilian music from Diego Galaz,” Luper said. “That started me on that journey. I learned Breton music along the way, but what’s really stuck with me is Scandinavian music. Now I have an international friend group and a community that is so nurturing. It’s a place to go try out whatever your figuring out. If you play a bad note, like Alasdair says, don’t worry about it. It falls to the floor.”

While Fraser treasures the experimental spirit and the extensive web of friendships that have flourished at the music camps, he’s also an exacting master who draws inspiration from the tensions inherent in the Scottish fiddle tradition. A body of tunes played on bagpipes blossomed when an infusion of Italian culture in 18th-century Edinburgh led to a violinistic, almost chamber-music approach to folkloric melodies. At the same time, fiddlers evoke the tradition’s ancient, wild roots as ecstatic dance music for communal celebrations. Fraser’s work with Haas added cello to the fray, and the duo is still working out the sonic implications.

The political implications of Scotland’s traditional-music renaissance is also an open question. Fraser’s ardent hopes for Scottish independence were dashed by the results of the 2014 referendum, which lost by five percentage points. With the United Kingdom pulling out of the European Union, many Scots are once again pondering whether it’s time to make their own Brexit.

“There are a lot of very frustrated people who don’t want to leave Europe,” Fraser said. “They’re very happy with the idea of a pan-European existence. The inclination in England is to circle the wagons and save little England and hope the British Empire isn’t dead. In response, there’s been an upsurge of interest in the arts. I hate to say it, but there’s that old argument that for the arts to flourish, you need adversity.”

We may be in for some very good music indeed, on both sides of the Atlantic.

As our world grows more interconnected, folk and classical traditions continuously mix it up.

The Scandinavian folk revival is in full bloom and has a lot to offer classical-music lovers.