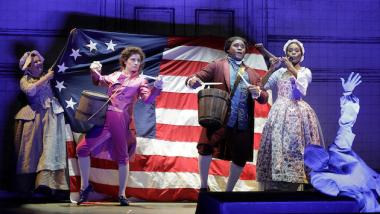 The idea to link the three Wolfgang Amadeus Mozart and Lorenzo Da Ponte operas — Marriage of Figaro, Don Giovanni, and Così fan tutte, — didn’t come to director Michael Cavanagh in a flash like an idea in a cartoon; it was a little more gradual.

“It’s like those one of those curly fluorescent light bulbs — it dawned on me over time. You know how you turn them on, they pop on and then they grow in intensity?” he said.  “I think a lot about operas and how I want to treat them and how they fit together. I’ve directed each of these big, wonderful pieces a few times. I always want to find central themes, and with Figaro, it’s always occurred to me that it’s about these wonderful beginnings. They are starting to build something, a relationship or a family or a society.”

In Così fan tutte, the characters are at a crossroads, Cavanaugh thinks, and Don Giovanni is all about finality.

“[Don Giovanni is] all about comeuppance, karma, whatever you want to call it,” he said. “You reap what you shall sow. [People] mustn’t live their lives without considering other people or the consequences of their actions. In a world we all want to live in, the bill has to be paid eventually.”

So Cavanaugh had a structure with a beginning, a middle, and an end, and these three productions are coming to the San Francisco Opera. Figaro is this season, Così fan tutte is scheduled for the 2020–2021 season, and Don Giovanni for the 2021–2022 season. Each one will stand on its own but could also be seen as a kind of trilogy. Cavanaugh decided to set them in the same place in different time periods, and a house struck him as the perfect metaphor.

All three operas are set in a large American mansion, with The Marriage of Figaro during its original period of the late 18th century; Così fan tutte 150 years after Figaro with the house repurposed as a country club in 1930s America, with fascism rising in between the two world wars; and Don Giovanni about 150 years after that in 2090, in a sort of dystopian future with the house now falling apart.

With The Marriage of Figaro taking place in the same time period as the original, America post-revolution seemed like the logical choice, Cavanagh said.

“If we’re thinking about societies and new societies and new beginnings, it was a no-brainer to [ask] what was the great democratic experiment everyone was so fired up about at the time? America,” Cavanagh said. “So this whole new set of ideals about how people could and should best organize themselves fits perfectly with all these different political threads of Mozart and Da Ponte.”

There were lots of Italian immigrants in America at that time, Cavanagh points out — including Da Ponte. For costume designer Constance Hoffman, that was how she first started thinking about this staging of Figaro — by reading about Da Ponte’s life and thinking about the America he came to.

“As an immigrant, he started life over in middle age and that interested all of us, and we started thinking about the ideals of this new republic of America,” she said. “This piece is about modernism and moving forward out of the old habits of aristocracy and about the abuse of power and the working class outwitting that abuse.”

Hoffman liked studying the fashions in that era, which she thinks is far more interesting than the generalized ideas about the era many of us have.

“We have this idea of hardworking simple folk who founded this country, but they had a huge investment in class and fashion,” she said. “There was still a real sense of landowners versus indentured servants and a huge conversation going on socially around the way people dressed.”

Hoffman used red, white, and blue — subliminally, she hopes — as a way to link the three pieces. She’s enjoyed doing the research into the clothes of that time, looking for variations in that limited palette, and designing an individual costume for each chorus member.

Hoffman says she and the others have been thinking about how the ideal of American equality can be mythical.

“There’s always been inequality and abuse of power,” she said. “The ideal of freedom didn’t include everybody and we’re still dealing with that today.”

Opera today is trying to recognize that inequality, says Charles Chip Mc Neal, the director of the opera’s recently created Department of Diversity, Equity, and Community. Susanna and Figaro, the leads in this production, are played by actors of color, Michael Sumuel and Jeanine De Bique. Because they are playing servant roles in an 18th-century American mansion setting, the optics of that was definitely worth talking about, Mc Neal said, so he and his colleagues at the Opera have been doing that, and he wrote an article about it for the Marriage of Figaro program book as well.

Opera is a good place to talk about these issues since the themes are universal and relevant, Cavanagh says.

“There are bullies, con men, and liars in every single time of our lives,” he said. “These pieces are a response to that and about the hierarchy in our society that refuses to budge, Marriage of Figaro especially. It’s about progress and a group of people who want to move their society forward and accept change and a whole other set of people who are desperate to slam the brakes on it and keep it in this kind of weird idea of the good old days, which, of course, never existed.”

Cavanagh says the pieces are traditional despite the change in setting.

“I refuse to change the libretto, and I refuse to change what the piece is intended to be,” he said. “I don’t think it’s radical at all. Just because they’re wearing clothes from the 1930s, that doesn’t mean it’s not Così fan tutte. It can be controversial when the director or the designers take it too far and try to make the show too cryptic and the audience is left staring at a big puzzle they’re supposed to figure out. That’s irresponsible, because as a director, I also have a huge responsibly to my audience and to my performers to let them do their best work and have their voices heard, in the rehearsal room as well as onstage.”

A Voice To Be Heard: A Conversation With Jeanine De Bique

The soprano talks about her meteoric rise and her SF Opera debut as Susanna in Figaro.

The celebrated conductor talks about his musical journey and his return to SF Opera for Figaro, which opens Oct. 11.

A ‘Futuristic’ Lucia Offers Nothing New But Plenty to Enjoy

Reimagining Human Relationships to Nature in Let Us Speak Frog