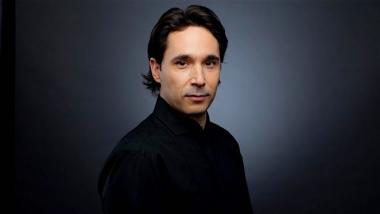 Hungarian conductor Henrik Nánási never really made a conscious decision to make a living through music. He just kept pursuing and working at what he loved, and it burgeoned into a successful career. At 44, the talented maestro has made a name for himself conducting renowned orchestras in concert halls worldwide. He made his debut on the San Francisco Opera’s podium in the production of Richard Strauss’s Elektra in 2017 (he went on to conduct it for the Teatro alla Scala in Milan) and performed for the first time with the Metropolitan Opera in New York earlier this year. Nánási said he is thrilled to be returning to San Francisco to lead the orchestra in a new production of Mozart’s The Marriage of Figaro, which opens on October 11 at the War Memorial Opera House.

Born in the small town of Pécs, Hungary, Nánási studied piano and composition at the Béla Bartók Conservatory in Budapest. He continued his education at the University of Music and Performing Arts in Vienna, where he met his wife, composer and music instructor Veronika Ágnes Fáncsik. After an impressive array of positions and engagements with prominent orchestras in several different cities, in 2012, Nánási became the general music director of Komische Oper Berlin. During his five-year tenure, he had the opportunity to conduct a broad collection of classic opera repertory.

I sat and chatted with Nánási after a rehearsal at the War Memorial Opera House, about the people and events that have led him to his celebrated life on the concert stage.

You grew up listening to opera through your parents’ collection of recordings. Was anyone else in your family musical?

No, I am the only one. My father was a big classical-music fan, and he had all these recordings of Italian opera, which was not easy to get back then in Hungary in the ’70s, and he played a little guitar.

When did you decide you wanted to be a musician? Was there a moment?

There was never a question that I would do something with music. It was so natural for me to do it. Honestly, if I live until I am 80, I see myself still doing it, and hopefully enjoying it.

You originally studied piano. How did that come about?

I grew up in a very small village, and there was no music education, but when I was eight, suddenly the school bought a piano. Of course, all the parents wanted their kids to learn the piano, and that’s how it started. I began studying piano there, but we didn’t have a piano at home, so my mother painted a piano keyboard on a piece of paper, and I practiced on that. It was very funny. When I was around 12, we moved to Budapest and got a piano, and then I was able to practice on a real piano at home.

What made you decide to become a conductor?

I studied piano and composition at the Béla Bartók Conservatory in Budapest, but composition was the main thing, and I wanted to continue it in Vienna. I was always a big fan of opera, and after two years of studying composition, which was a different world, I started missing it. I was also starting to show more interest towards conducting and then later it just happened. I started conducting in Vienna, and as I did more and more, it put composing into the background.

Does your composing experience influence your conducting?

I think because I studied composing, I look at conducting in a different way. It adds a completely different dimension to how you understand music. That is why I respect composers so much when I conduct — I know how much energy and nerve it takes, and how every detail you put down in the notes, and what you want to express with the music as a composer, is so important to you. That’s what I try to look for in all the pieces that I conduct.

This is a new production of The Marriage of Figaro. Does that make a difference in the music?

It makes a big difference because it’s a chance to create something new. The ideas of the stage director and the production create impulses to try new things musically, which has been happening in this production.

How was your debut at the Met earlier this year?

It was a fantastic experience. First of all, we did one of my favorite pieces — Bartók’s Bluebeard’s Castle, which was fantastic, because he is the most important composer for me. And to do it in that house was so great. It was paired with Tchaikovsky’s Iolanta. We had a wonderful cast, and it was a great experience with the orchestra.

You conduct major symphony orchestras as well as opera orchestras. How does that experience differ?

With an opera, it’s a much longer rehearsal period, so we get to know each other and it grows together. It requires a completely different kind of energy, because in the opera, you have to consider all the aspects, and you have to be very economical. If everything comes together, there is nothing more beautiful than a great opera.

A symphony concert is a completely different experience — you can concentrate more just on the music. But you have just three-to-four days of rehearsal before the premiere, so you have to have the right energy on the first day, because you have very few days to get to the level you want.

How do you break the ice and communicate your vision with a new orchestra?

One of the most mysterious and beautiful things about making music is that it is a common language. You can come to an orchestra you have never seen, with so many musicians from different countries, speaking different languages, having different mentalities and different cultures and traditions of playing instruments, and most of the time it is easy. If the common love for the music is there, then it’s just about fine-tuning certain things and working on the details. If you are passionate about what you do and you are passionate about the music, then you find very fast how to make music together, and for me, it is very important that we do it together.

How do you see as your role as a conductor?

There has to be one person who shows the direction, and as a conductor, you have to give the direction the way you see it — your interpretation. But I also think that if you are conductor, and want to develop or improve yourself as a musician, it is very important to listen to the musicians, and to filter how you can bring it together with your own opinion, imagination and conviction. You have to have an idea of what you want to do, but you have to be ready to discuss certain things. If the passion is there for the music, it is quite easy to find where everybody feels comfortable doing it together.

Do you have different approaches for different composers?

It is very important to take the time to get to know the composer as well as possible — not just the music. You have to know about his life, you have to read his letters, and know how he thinks. What were his tragedies? What were the great moments of his life? The time it was written, the influences the composer had, and the influences of the time — they all come into the compositions. You have to know all these things because they change the interpretation a lot. The music piece is not just the notes, it’s also what is behind them, and behind them is the whole soul of the composer.

Would you like to have your own orchestra again?

I definitely want to have a position again with my own orchestra because it’s a different situation. When you are freelance, you have just a short period of time to develop something, and that’s it. But it’s a different challenge to have a plan and to have a vision together with an orchestra — we start here and want to get there, and let’s see how far we can go together and make all our visions together happen. I think that’s a beautiful thing, and I ‘m sure at one point I would like to do it again.

What do you like most about performing with an orchestra?

I like how it comes together, how it grows, and how you develop and make music together. Rehearsals are the rehearsals, but when you have the evening, it’s such a unique moment, making music and feeling the audience (as a conductor, behind you!). If everything comes together, you feel the energy from the audience coming back to you. It is really unique, and I wouldn’t want to miss it!

Corrections: The opening date for The Marriage of Figaro is Oct. 11, not Oct. 5, as originally published. We corrected the spelling of Veronika Ágnes Fáncsik’s first name.

When an opera is as brilliant as Mozart and librettist Lorenzo Da Ponte’s Le Nozze di Figaro, and everything onstage and in the pit clicks, the results can be magical. Such is the case with one of the most animated and delightful productions of the masterpiece that I have ever seen.