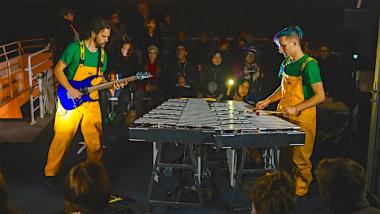 Are We Done With Genre Yet? How Young Musicians Are (Again) Dissolving Boundaries

It’s easy for musicians to become trapped in the strictures of genre or style. How many times has an orchestra or chamber group been accused of playing Beethoven “too romantically” or a historical performance ensemble of failing to adhere to some anachronism or another? Crossover music, despite the name, deliberately upholds these sorts of distinctions, as the whole point is to attract listeners from multiple traditions. Conversely, the advent of the internet has allowed artists around the world to experience and assimilate new musical ideas and idioms.

In contemporary art music (we really need a better term than “contemporary art music”), lines between styles are blurring, or have always been blurring. Artists are reaching out not just to absorb new styles, but to invite performers with diverse backgrounds to collaborate and actively participate in the creation of new work.

Now, classical music is absorbing the “exotic” musical traditions of the day is hardly new. Even in Bach’s time, the “Sarabande” was considered an exciting, foreign form. But with the rise of the internet, this cross pollination is speeding up. Even as large institutions are clinging more tightly to tradition and the canon, music is evolving. And listeners are evolving with it. Composers and performers and composer-performers are finding audiences for unique synthetizations of a plethora of styles and voices. Take the San Francisco-based percussion and guitar duo The Living Earth Show, which actively seeks to identify and work with creative voices that don’t come from a traditional musical background.

“Some of the people we work with have never written notated music but are composers by any other qualification,” said percussionist Andy Meyerson. Meyerson and his partner, guitarist Travis Andrews, are products of conventional conservatory training. Where they’ve taken their ensemble since then is anything but typical. “Our sole job is to be the best artists for artists doing interesting work,” Meyerson said. “We’re seeking to help the folks who don’t come from this tradition. We’re providing artistic tools to folks with a hypothesis but no idea what will happen.”

The Living Earth Show, approaching its tenth season, plays what can broadly be described as electroacoustic music, but really it defies classification. Look to their site for a sample. The duo’s commitment to presenting work by dissimilar artists is also a hallmark of the more nascent Cleveland Uncommon Sound Project (CUSP), a growing midwestern organization.

“We want to be diverse, and we don’t want to curate a specific CUSP sound and exclude other kinds of music,” said cellist and musicologist Sophie Benn, who co-founded the Cleveland Uncommon Sound Project with saxophonist Noa Even in 2017. “We’re trying to create a balance between things we know are really good and things that we maybe aren’t sure about but don’t ‘fit in’ to the typical new music ideal. It’s tricky — there are just certain kinds of music that neither of us has any experience evaluating. We’ve had to draw some boundaries based on logistics and our own level of knowledge.”

These are two examples of many in cities across the country, as collaborations across styles or genres are becoming increasingly common and conspicuous. Du Yun, the New York-based Pulitzer Prize-winning composer-performer works at the intersection of “orchestral, opera, chamber music, theater, cabaret, oral tradition, public performances, sound installation, electronics, and noise” according to her site. Du Yun pointed out that “classical music has always, always been assimilating new things,” arguing that the 20th century set music back due to the great wars and the resulting surge in nationalism, as well as the fact that record companies began to parcel music into different genres to help market and sell albums.

“Today, thinking of style is a little ridiculous,” Du Yun said. “The Spotify algorithms have sort of broken this. For press or marketing, it’s useful language, for people who feel compelled to have an elevator pitch for the public. But how can I describe my music in a line? It changes depending on the story, on the project, by the minute even. Is it opera? Is it video-based? Is it oratorio?

“What kind of style or genre I use is less important than the meanings I’m trying to convey,” she continued. “I’m very aware of style and the history and [provenance] of what that means. As you understand tradition, you can respect or subvert or pay tribute.”

Meyerson also eschewed thinking in terms of genre, calling the idea of genre “extremely exclusive,” even if hard to avoid. “There should be no definition … that keeps anyone out. We want to give all music a home,” he said. Still, he said that because Living Earth Show works with classical presenters it can be useful to describe the group as genre-defying. In 2018, Cleveland Uncommon Sound rejected an application from an art rock band to appear on their series. The group reapplied this year and was admitted. “This rock group, we felt like even though their sound isn’t a classical sound by any means, it’s still an awesome sound,” Benn said, explaining that CUSP was still developing and stretching its idea programming. “The elephant in the room is the internet. Music is infinitely accessible to us at all times now; there’s this notion that you can say ‘oh that sounds cool let’s listen to it.’”

Benn said that classical musicians are realizing that they need to remain open to other sorts of music. Du Yun’s position is a bit different, as she argued that classical musicians have always done this, even if it’s happening more frequently now. Devoting the time is necessary, there are dangers in dabbling in a genre if a performer doesn’t understand it thoroughly enough to represent and perform well.

“I don’t like things that aren’t done well,” Du Yun said,  describing herself as a musical omnivore with a huge appetite. “I want to ‘eat’ everything, and I’m very curious about all sorts of music. It’s ok to fail; it’s not ok to quickly whip something up to check off boxes.” She said that the more she knows, the stronger case she can make for the piece or tradition it represents.

And what’s the artistic payoff for this sort of creativity? Meyerson said that it’s amazing: “The question we’re constantly asking is how can music or us make the world suck less,” he said. “That’s the constant guiding research question. What’s important is the agency that folks have. Who’s speaking for whom is a huge question in classical music. It’s a complicated and important.”