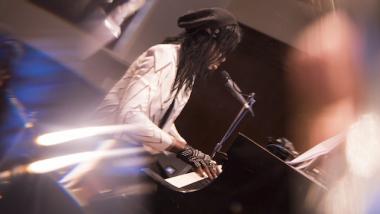 While the idea of forging your own unique genre might sound ideal, obviously it’s easier said than done. But the multimedia artist M. Lamar certainly tries.

It helps that he is an artistic polymath: To name a few of his talents, he is a composer, pianist, countertenor, visual artist, and — in his newest work, at least — a philosopher. And late Friday evening at Old First Church (and presented by Old First Concerts), he collaborated with the Living Earth Show, a duo consisting of electric guitarist Travis Andrews and percussionist Andy Meyerson. Together, they premiered Lordship and Bondage: The Birth of the Negro Superman.

It was a confounding cross between opera, jazz, blues, gospel, metal, and experimental music. And while there were 10 numbers, this is not a song cycle in a traditional sense, in which words are consistently sung. Rather, Lamar spoke the title of each number — in a guttural, amplified voice that sounded like Satan — to mark the start of each.

In between, M. Lamar’s singing often sounded like it was mimicking the twangy oscillations and lithe harmonics of the guitar. His live layering sometimes created a reverb effect. He managed to play piano during all this, too, and all three artists performed the 70-minute piece from memory. The percussion ranged from subdued, such as the circular stroking of a cymbal, to brutal — especially in the boomy church, it was sometimes loud enough that we were given earplugs at the entrance.

There were also performative and visual components. For example, the three entered the space by walking single-file down the aisle, toward the pulpit and ominously striking a gong-like metal cylinder. Both members of Living Earth performed shirtless, but they did wear black hoods that reminded me of the white ones donned by the KKK.

Throughout the work, a black-and-white video projection mostly showed a moon under which smoke or flames billowed. Sometimes the moon contained an inverted cross (I’ve read the significance of this symbol to Lamar is explained here), which occasionally ticked between 12 and six on the moon’s face like a compass needle twitching to find true north (and/or south). When the moon image disappeared, a mechanistic, warrior-like figure took over. The character struck me as The Woman in a silent-film production of Erwartung.

To ponder what everything together was intended to mean, no clear narrative unfurled; instead, a dark, bewildering mood lingered. But the text included some clear references. For example, while “lordship and bondage” works as a reference to slavery, it’s also from a famous section in Hegel’s Phenomenology of Spirit, from which the title of the first number also derived. Hegel believed that our self-consciousness is inextricably interwoven with the perspectives others have of us.

“Superman,” meanwhile, is a Nietzschean idea, which the second number’s title referenced. Lamar has said that, in this work, he is seeking “black transcendence,” which would acknowledge the horrors of black history while “still existing on a higher plane.”

The titles in numbers three through seven quoted jazz masters: Sun Ra, Cecil Taylor, and Cornel West. Some spoke of music’s ability to convey the whole of human experience, be it an individual viewing a fuchsia awning during one of the work’s brighter moments or the “dark roots” of a collective — and musically terrifying — scream. The next two numbers referenced Sun Ra’s claim that he was a missionary from Saturn (which may or may not have been represented musically by a twinkling xylophone and a high-register piano) on earth to preach peace.

After the final number, the performers exited as they entered. Lamar authored the 10th title himself: “We are the resurrection insurrection resurrection,” which I found to be about as perplexing as the whole work. While I therefore cannot confirm or deny whether a Negro Superman was indeed born on Friday night, I can say I’ll likely never forget Lamar’s challenging attempt.

At the Prototype Festival, Opera Gets Good and Difficult