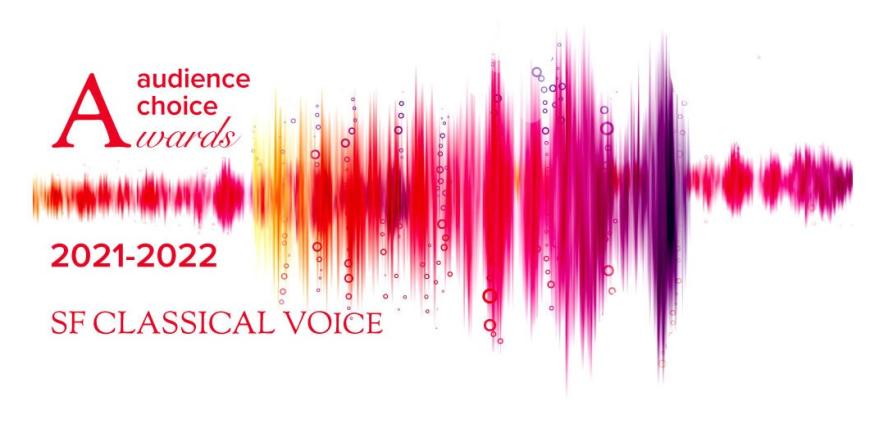 It’s an annual tradition at SF Classical Voice: We asked for your favorite performers and performances of the past season, and you let us know. As always, “Audience Choice Award” reflects the nature of the voting. All nominees and final winners are selected by you — avid listeners and SFCV readers. And while we’re happy to see the robust audience response, we’re just as impressed by your knowledge of and passion for the artists you love.

Plenty of categories came down to just a few votes, and respondents rewarded a variety of musicians and organizations for their work. This was a season that was shadowed, if not halted, by the specter of the pandemic. So bravo to all the music lovers who made the decision to return to the concert hall throughout the year: May you be the leading edge of a wave. And a second round of cheers to all the musicians whose dedication and unflagging spirits made the season possible.

And with that, here are the winners of the 2021–2022 Audience Choice Awards for the San Francisco Bay Area:

In a hotly contested category, Nikki Einfeld pulled out a slim victory over Othalie Graham (for her Wagner concert in Vallejo) and Limmie Pulliam (whose Otello for Livermore Valley Opera earned the singer third place). Often reviewed in SFCV and having won the award before, Einfeld is obviously a favorite with our readers, and her performances this past season in Scalia/Ginsburg and with Left Coast Chamber Ensemble again show her ability to make new music speak to audiences.

Voices of Music was your favorite again in this category, overwhelmingly. The ensemble’s digital programming of high-definition concert videos, now including the Sundays at 10 series, has brought in fans from beyond the Bay Area, but VoM’s musicianship and attention to detail is what wins the group awards.

Yuan Yuan Tan makes it look easy, and she topped this category again this year. Pretty much everyone who has seen her star turns in major roles at San Francisco Ballet counts as a fan. And this is a company with a lot of stars. Yuan Yuan Tan, however, is nonpareil and reigns supreme with our readers.

Keeping the faith brought rewards for American Bach Soloists, the winners in this category. The group’s annual Messiah performances in Grace Cathedral and its summer festival have won favor with fans, as well as critical praise. An indefatigable artistic director, Jeffrey Thomas, continues to freshen the group with new talent and a teaching academy. ABS’s friendly rivals on the Bay Area’s thriving early music scene, Voices of Music and Philharmonia Baroque Orchestra, came second and third, polling a large number of votes.

The Bay Area boasts an array of new music organizations, but our readers only had ears for Left Coast Chamber Ensemble. Their practice of mixing repertory staples and new scores in concerts with cleverly designed themes has won over a broad fanbase, and they captured 46 percent of the vote in this category.

As many good orchestras as there are in the Bay Area, there’s only one San Francisco Symphony, the winner here again this year. The organization serves a wide variety of patrons through concert programming that moves from traditional classical to a popular series of screened movie concerts to a wide variety of guest artists, not to mention citywide education initiatives, the best youth orchestra in the Bay Area, concerts celebrating the Day of the Dead and Luner New Year, and several free performances every year. These musicians have certainly earned their perennial top-dog status.

It seems to follow that the orchestra you rated as best should also take home the prize for favorite conductor, which this year went to Esa-Pekka Salonen. The Finnish superstar who took over as music director of the San Francisco Symphony from Michael Tilson Thomas has brought his own interests and ideas to the organization, and on the podium he is, in a different way than Tilson Thomas, a galvanizing presence. Of note in this category is the large number of votes polled by runner-up Hanneke van Proosdij of Voices of Music, giving Salonen a run for his money.

This year’s voting was oh-so-close, with winner Rachell Ellen Wong edging our cellist Abigail Monroe by only three votes and violinist Augusta McKay Lodge coming third, only 30 votes behind. Wong, a standout violinist specializing in historical performance practice, was a star with several Bay Area groups this year, including Valley of the Moon Music Festival and American Bach Soloists. The 2020 Avery Fisher Career Grant recipient’s fiery style is clearly winning over SFCV readers.

You selected Juanita Harris for best jazz vocalist, but Tiffany Austin was a strong runner-up. The win is a first for the South Bay-based Harris, who has been a fixture on the scene since 2004.

In the most crowded field of nominees in this year’s voting, Marcus Shelby takes the honors over 13 others. Shelby’s upright bass has been heard often in the Bay Area in both his quintet and his big band. A notable composer as well.

Despite a strong push from advocates for Livermore Valley Opera’s Otello, it is SF Opera’s production of Don Giovanni that gains the top spot from this year’s voters. The superb cast, headed by Etienne Dupuis, Luca Pisaroni, Nicole Car, and Adela Zaharia, triumphed in both their singing and acting.

The San Francisco Ballet 2022 season was studded with classic story ballets, and the most famous of them, Swan Lake, bested the competition in our readers’ poll. The production, which featured Frances Chung as Odette/Odile, received a thoughtful review from SFCV dance critic Janice Berman, who nevertheless raved, “Her Odile was incredible, one of the best your reviewer has ever seen.” Just a few votes from the winner’s circle was Alonzo King LINES Ballet for its collaboration with the SF Symphony on “Reopening Night.”

The San Francisco Symphony took this one convincingly, too, scoring with their semistaged production of Igor Stravinsky’s Oedipus rex. SFCV reviewer Lisa Hirsch called Peter Sellars’s production “immensely powerful.” Adding music from the composer’s Symphony of Psalms, Sellars completed the retelling of the myth, which our readers found as timely as Lisa did.

Best Early Music/Baroque Performance: Voices of Music, “The Art of the Violin”

There was another squeaker in this category, with violinist Rachell Ellen Wong passing the finish line ahead of violinist Rachel Podger by a handful of votes. Wong’s performances at Valley of the Moon Music Festival were a standout event, likewise Podger’s concert of J.S. Bach’s partitas and sonatas at the Berkeley Festival & Exhibition in June.

Valley of the Moon Music Festival was on more solid ground in this category where Kyle Stegall posted a solid win for his recital with VMMF co-founder Eric Zivian. True to the mission of using historically informed practice on 19th-century masterpieces, Stegall sang Schubert’s entrancing song cycle Die Schöne Müllerin, with Zivian accompanying at the fortepiano.

As more live events returned in 2021, holiday cheer was likely in high demand, as Pink Martini and vocalist China Forbes took to the SFJAZZ stage last December with “Cosmopolitan Holiday Music.” The band that calls themselves “a little orchestra” did not disappoint; the program highlighted music from the group’s 2010 album Joy to the World. In second place, SFCV readers also enthusiastically voted for another SFJAZZ performance by Rhiannon Giddens and Francesco Turrisi. The duo performed music from Giddens’s Grammy-winning 2021 album They’re Calling Me Home. Third place was taken by Anna Laura Quinn, whose concert at The Sound Room featured her newly released album Open the Door (2022).

With audiences returning to live performances, the right venue can make all the difference in how concerts are received. Home to the San Francisco Symphony, Davies Symphony Hall triumphantly returns as your favorite large venue this year. Closely following in second place is the War Memorial Opera House.

Places of worship have offered space to Bay Area musicians so readily that it’s only fair that a church tops the list of best venues. Readers chose St. Mark’s Episcopal Church in Berkeley, which boasts great sightlines and a lively acoustic. It’s a mainstay location for the East Bay’s many chamber groups and recitalists.

In a surprisingly heavy victory, Freight & Salvage easily bested the competition in this category. Voters chose the acoustics and vibe of the comparatively recently expanded venue, as well as the programming. Yoshi’s was a distant second.

American Bach Soloists’ Summer Bach Festival ranked a runaway first with our readers in this crowded category. The festival showed an adventurous spirit with a “Bach and the Blues” night and a highly anticipated full performance of Handel’s oratorio Belshazzar.

Livermore Valley Opera made a lot of new friends with its production of Verdi’s Otello. The company rose to the top of this category, which showed that SFCV readers were engaged and hungry for live performance after the pandemic shutdown.

Best Streaming Performance or Series: Voices of Music, Sundays at 10

Voices of Music’s ongoing Sundays at 10 series, featuring performances captured from live concerts, was a hit with SFCV voters. The competition was lively, though, showing that we have not abandoned streaming options after the end of the shutdown.

The full roster of excellence, as chosen by our readers. Find out who has bragging rights this year.

Congratulations to the winners of the streaming edition of the annual SFCV readers’ poll.