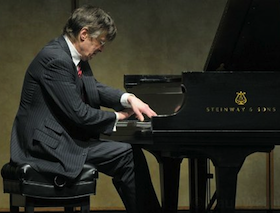 Bay to Bay: The Concert Scene From North to South

The sword of Damocles hanging over the San Jose music scene is the mortgage on Le Petit Trianon, a small auditorium, located a block north of City Hall, that’s the city’s gem of a chamber music venue. As reported in SFCV’s Music News last month, the owner was facing foreclosure this fall due to the impact of high interest payments.

What does this mean for all the groups that have scheduled concerts there for the upcoming season? The performing groups using the facility are hoping for the best. Richard Jaffe, president of the San Jose Chamber Music Society, reports that the Society has met with the owner’s representatives. “We’re proceeding on the assumption that the facilities will be available for use,” Jaffe says, and they’re working to prepare a Plan B of alternative performing spaces if that should become necessary.

Last week, the owning corporation filed for bankruptcy protection, a representative of the owner told me on Thursday. The company hopes by this action to gain time to refinance its mortgage and thus lower its costs. In the meantime, normal operations will continue. The original announcement referred to the possibility of selling the building. This is an option for the future, if a buyer can be found who will maintain the theater. Keeping this acoustically delicious space open is a priority of the owner, Keith Watt, who originally made it available after refurbishing it in the 1980s, as part of the renaissance of downtown San Jose that also brought back the old California Theatre eight years ago.

With a hopeful air, then, here are some highlights of the fall season in San Jose and environs selected by David Bratman. Selections from the Mondavi Center follow, below.

The recital series of the Steinway Society of the Bay Area always brings in interesting pianists. This year’s first concert offers Spencer Myer, a trippingly fluid player who will present a colorful program of works by Haydn, Debussy, Liszt, and Albeniz.

The Ives Quartet is a locally based ensemble with a tough-grained and determined style. The players like to mix enjoyable modern American works with standard repertoire. In this fall’s concerts, Henry Cowell’s quirky and rhythmic “United” Quartet is heard along with the introspective Quartet “From My Life” by Smetana, and Haydn’s Op. 50, No. 5, in F Major, one of his lesser-known prizes.

Always a seasonal highlight, the annual joint holiday concert of the Stanford Symphonic Chorus and the Peninsula Symphony, held in the awesome precincts of Stanford’s Memorial Church, will this year feature a typically vivid pairing, Mozart’s Solemn Vespers, K. 339, and the Requiem by Gabriel Fauré, famous for its “Pie Jesu.”

This combination ought to make people sit up and take notice: conductor George Cleve and pianist Peter Serkin performing Brahms’ First Piano Concerto. With Symphony Silicon Valley, the premier professional orchestra of the South Bay and a descendant of the San Jose Symphony, of which Cleve was long-time music director. Along with the Brahms comes Tchaikovsky’s “Pathétique,” still the most nerve-bending symphony in the repertoire.

If there’s a Great American Symphony, it’s Roy Harris’ rugged Third from 1938, a fitting companion for “Decoration Day” from Charles Ives’ Holiday's Symphony also on the program from an intrepid amateur community ensemble, the Palo Alto Philharmonic. The evening rounds out with Brahms’ Violin Concerto, with the intrepid local violinist Christina Mok as soloist.

In the central valley the Mondavi Center continues to up the ante with a combination of great tradition and alternative top acts. Here is a selection.

The-17-year-old pianist and composer Conrad Tao has already made a name for himself by stepping in for Louis Lortie and others and garnering glowing reviews for his performances. In Sacramento, Tao will perform Beethoven’s Piano Concerto No. 1, and the U.S. premiere of his orchestral work Pángŭ. The program includes Mendelssohn’s Symphony No. 3. Michael Morgan conducts.

The grand-daddy of new music festivals — where the Kronos Quartet and many others got their start — turns 35. This year, this free festival opens with a keynote address by featured composer Augusta Read Thomas. Performers during the 10-day festival include the Third Coast Percussion quartet; pianist Geoffrey Burleson; the JACK Quartet; iconoclastic guitarist Benjamin Verdery; the harp-focused Motoshi Kosako Trio; and Sacramento’s premier music ensemble, Citywater.

Cantus, All Is Calm, Mondavi Center

The adventurous nine-member choral ensemble Cantus, along with Theatre Latté Da, will perform works from its recording All Is Calm, a selection of songs, poetry, letters, and journal excerpts relating to the extraordinary World War I “Christmas Truce,” when soldiers on opposing sides of the battlefront who had heard each other singing carols put down their weapons to celebrate Christmas together.