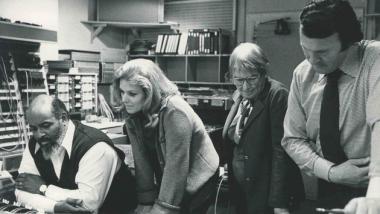 Each time pianist Carol Rosenberger performs Beethoven’s Opus 110 (Piano Sonata No. 31 in A-flat Major), there is all-consuming, radiant joy, even in the work’s pathos-filled, beyond-sadness Adagios.

“It completely changes my day when I can sit down and play that wondrous piece. For the 40 years I’ve played it, it reveals itself again every time. It feels to me like a journey of tranquil, lovely moments, excitement, great sadness, recovery, hope,” Rosenberger says in an interview.

The second adagio section leaves Rosenberger scarcely able to breath. The music conveys an overwhelming feeling, like the complete inability to cope, she says. When the fugal theme re-asserts itself, variations merge and emerge with growing clarity and strength. She finds pure glory in the final notes. “Maybe because I’ve lost so many people who were close to me, the extreme sadness and then the final radiance means to me those wonderful things and people lost are still there.”

In its trajectory from beauty to tragedy to triumph, Beethoven’s masterpiece is a musical metaphor for Rosenberger’s life. Born in 1933, the Michigan native was struck by paralytic polio at age 21. Her promising career as a concert pianist was suddenly in peril. Study in France, under the renowned Nadia Boulanger was interrupted. Her future dreams, born at a keyboard 19 years prior, appeared to vanish.

A new memoir, To Play Again (She Writes Press), tells the story of Rosenberger’s remarkable battle to retrain her body. Overcoming all medical, music industry and social doubt—her own fears and doubts notwithstanding — Rosenberger returned to the concert soloist circuit at age 30. During the last four decades she has established herself as a gifted, sensitive pianist and an inspirational teacher as a faculty member at the University of Southern California and in workshops held nationwide. Under the Delos label, Rosenberger has made over 30 records. In 2007, she became the director of the independent record label following the death of Delos founder Amelia Haygood.

Haygood was one of several people whose deep, committed relationships with Rosenberger extended far beyond the usual boundaries of friendship. In her memoir, she writes of their first encounter. While playing Schubert at the home of Carolyn Fisher, an acquaintance who offered Rosenberger and other pianists regular opportunity to practice in a large space with a fine instrument, Haygood appeared at the door. “On her head she wore a “baggie,” as large plastic storage bags were called then, and we all laughed at the unusual headgear. It had begun to rain, and the plastic bag had been the most serviceable “rain hat” to be found in Amelia’s car.”

Moments later, she learned that Haygood, a practicing psychologist, had stood outside in the rain, not wanting to knock because it would have interrupted the Schubert sonata Rosenberger was practicing. Their shared passion for music and instant compatibility formed a sturdy foundation for lifelong friendship. Haygood’s perceptive professional counsel during Rosenberger’s post-polio rehabilitation is interwoven with personal recollections of their unique bond throughout the memoir.

Asked about people who offered support (financial, physical, technical, medical, emotional, psychological, and more) during her recovery and triumphant return to the stage, she says, ”I have had wonderful people in my life. It tells me there’s no limit to how deeply responsive, helpful, or selfless people can be. What determines why people are or aren’t like that? I suppose it depends on their life experience and inner development, but I believe it’s inherent in all of us.”

A similar flame—a responsive devotion to music, regardless of self-sacrifice and comfort—burns inside Rosenberger. The point is made clear as To Play Again delves into the science of polio. Her post-polio physical and emotional fatigue is most notable. “You have a kind of tiredness a normal person doesn’t have. If you encourage those remaining motor neurons, then by gum, you’re going to get tired sooner than a person who has not suffered polio.”

Most poignant among the facts presented is that within the first days of the illness, when the viral fever appears, then fades permanently or returns with full, paralyzing force, the motor nerve connections most severely damaged are those most in use. Rosenberger had been practicing diligently for hours every day during that crucial period. As a result, her fingers, especially her right hand, were highly impacted. No less importantly, her abdominals, back muscles and right “pedal” foot were, as she writes in her book, “knocked out.”

Key to her recovery was a practice she now imparts to her students. The process has her memorizing every piece in minute detail. She plays each work at highly reduced speeds, creating iron-strong mental and motor connections that won’t falter under fatigue or excitement. “It takes so long to retain an entire work,” she says. “Memorizing each piece, so you could start at any point, so you can find your way during an adrenalized time of performance, is exhausting. But this was the magic that allowed me to find my way to playing piano again.” She says it has helped students who suffer especially from stage fright. “The technique, when it’s absorbed, makes players able to play through an entire complex piece.”

Remarkably, Rosenberger wasn’t always able to speak so openly about her condition. She kept it hidden for years, except from her family and closest friends. “It was important to me that people not know. Why? If I could actually play a piece of music that was acceptable to me, I didn’t want people saying, “She has polio so it’s not as good.” I was scared they’d find something wrong with it if they knew.” Eventually, her manager, Sherman Pitluck, convinced her that her recovery story would be inspiring to audiences and would not lead presenters to distrust her reliability. “In all the years I played in public from that time on, not one negative word appeared about my disability,” she writes. In fact, pianists often approach Rosenberger to ask about thumb or wrist problems and seek advice or encouragement.

Rosenberger says the fundamental philosophies she offers most often to her students hark back to her earliest teaching experiences. “When I first started to teach, I was 12- or 13-years-old. There was the dictate, “You must practice such-and-such amount of time.” I rebelled against that. The first thing for students to do is to respond to the music. To have a wonderful time with it. I also told them to just try things, any time they wandered by a piano. Yes, they had to iron out some technical things in practicing. But after performances I’d say, let’s concentrate on how sparkling or beautiful it was, instead of the mistakes. I had the gall to advise their parents about practicing, to suggest playing fun things. Happily, all the adults said, “OK,” and we went from there.”

At Delos, Rosenberger plays a similar role: advising and supporting composers. Bay Area-based composer Mark Abel has worked with Rosenberger on more than one occasion. “Carol is an ideal exponent for a composer's intentions in the recording studio because she takes the time and makes the effort beforehand to fully absorb a piece’s content and contours,” he writes in an email. “That is not always the case with other musicians, who sometimes content themselves with less rigorous analysis and are looking to put their own “spin” on a piece (or resort to expedients to get through it technically) before they have come to grips with what it is trying to convey.”

Abel admires Rosenberger’s pursuit of authenticity and the fortitude required during her recovery years ago. “No one had ever successfully rebuilt and rewired their physical performance apparatus in this way, and she had to devise nearly all of the solutions by herself. There was no road map, so it took a great deal of courage.”

Rosenberger says running an independent classical music record label presents unique challenges. “It’s difficult for labels because all of a sudden it’s about streaming rather than the previous forms of recording and presenting music. On the other hand, I’m thrilled about streaming because anyone and everyone can listen to music. That’s a big plus. How does a label survive in this environment? I run Delos from my home, do a lot of the work myself. Making only digital releases where appropriate is something I’m thinking about and experimenting with. Sometimes artists still want CDs to sell at concerts. We have them buy a certain number of CDS at artists’ rate which helps the label stay solvent. It’s a balancing act I’m learning as I go along.”

As for women in the business, she projects a hope-filled forecast. “There’s much more accessibility than when I started playing again. Women pianists were not then in great demand. When the Ms. Magazine staff wrote about me and came to one of my concerts in New York years ago, just to say, “Hey, we’re with you kid,” that was an indication of things to come.”

Most important in her role at Delos she says is supporting contemporary composers to remind people that interesting new music is being written. “Good classical music is part of our society, not just a bygone one. It’s very much alive, pertinent. I'll continue to keep Delos alive and keep playing piano for myself for as long as it lasts.”