Laura Klein doesn’t usually seek out gigs with other women musicians. She certainly doesn’t avoid them, but like most female jazz instrumentalists the Berkeley pianist/composer spends most of her time on the bandstand in the company of men, whether she’s co-leading the quintet Five Play with her husband, guitarist/composer Tony Corman, or playing with his big band Morechestra.

But for her March 16 gig at Oakland’s Piedmont Piano, Klein has assembled a top-shelf band, and its timing makes the gender of the players part of the statement. Featuring Mary Fettig on reeds and flute, veteran bassist Ruth Davies, and versatile drummer Kelly Fasman, the concert is a celebration of pianist, composer, educator, writer, and award-winning broadcaster Marian McPartland, who would have turned 100 on March 20 (Klein’s trio, minus Fettig, also brings the McPartland tribute to the Sacramento Jazz Coop on March 19).

Upon her death in 2013 at the age of 95, McPartland was eulogized as a supremely versatile jazz stylist who gracefully conversed and collaborated with a vast array of fellow improvisers from her longtime perch as a host of the popular NPR show Piano Jazz.

“But I think her side as a composer is not that well known,” Klein says. “For a long time, she was reluctant to write music, but Alec Wilder encouraged her to compose. We’re going to showcase some of her really beautiful compositions. One of her strengths is her beautiful harmonic sense. Her compositions, a wistfulness, a certain quality, unique to her styles.”

The inattention paid to McPartland’s music is hard to figure. With pieces like “Afterglow,” “There’ll Be Other Times,” and “Time and Time Again,” she consistently displayed a gift for crafting ravishing melodies. The incomparable Johnny Mercer wrote lyrics for her tune “Twilight World” (which was recorded by the likes of Tony Bennett), and Elvis Costello contributed lyrics to her song “Threnody.” Klein arranged McPartland’s best-known tune, the bossa nova “Ambiance,” as an uptempo Latin jazz workout in 6/8.

“Marian always felt regretful that her tunes weren’t played more,” Piket told me. “She felt a little unrecognized. It’s kind of mysterious why some tunes don’t become standards. She wrote so many great tunes, but maybe they didn’t make it into the Real Book [musicians’ reference collection of jazz standards].”

Part of what makes McPartland’s music fascinating is that she continued to absorb new influences, finding inspiration from players born when she was already a senior citizen. She got her start playing Dixieland, established herself in New York on bebop-powered 52nd Street, and revamped her harmonic vocabulary in the wake of Bill Evans.

“It’s true you can hear Bill Evans coloristically,” Klein says. “But the phrasing is really her own, really different than Bill’s. There’s a record she self-produced, Ambiance, it’s very modern. People think of her playing standards, as a great interpreter of the blues and Duke Ellington. But the first time I heard her she was playing Chick Corea’s ‘Windows,’ and I know she recorded some Herbie Hancock too. She was very into staying contemporary.”

Klein first encountered McPartland as a music major in Buffalo just starting to explore jazz. Then as now, most of the musicians she was playing with were men. “I just didn’t know any other women jazz players,” Klein recalls. “I’m sitting there watching her with her trio, and she sounded great. It sounds so clichéd now, but this was in the late 1970s, and having this role model was amazing. There’s somebody up there doing this. I can do this.”

Introduced to McPartland by a friend, she found McPartland witty and extremely gracious (“She said, ‘we should play ‘Laura’ for you,’” Klein says). She went back to the club to hear the trio several times that week, and after moving to Boston to study at Berklee, made a point of heading down to New York City when McPartland played Café Carlyle, and “she would always come over and talk to me. She was always very encouraging.”

first gained attention when she went on the road with the Stan Kenton Orchestra at the age of 20 in 1973, the first female instrumentalist to join the band. McPartland featured her as a special guest at the first Women’s Jazz Festival in Kansas City in 1978, an experience she reprised the following year at the Concord Jazz Festival (released on Concord Jazz in 1980 as Marian McPartland at the Festival).

Always ready to give young musicians a boost, McPartland knew all about defying the odds. When she arrived in the United States in 1946 as the bride of respected Chicago-style cornetist Jimmy McPartland, it would have been a stretch for even the most optimistic observer to predict she’d make a significant mark in jazz.

After a brief open window during the war, women instrumentalists had few opportunities in the 1940s, and virtually no female player from Europe had made so much as a ripple. McPartland not only became a jazz institution with some five dozen albums to her credit, she racked up honors, including the NEA presenting her with a Jazz Master award in 2000.

Born Margaret Marian Turner on March 20, 1918 in Slough, Buckinghamshire, McPartland spent her early years in Woolwich, where at the age of 3 she began to play the piano by ear, imitating her mother. By the time she was a teenager, the family had relocated to Bromley, Kent, and her obsession with the piano only increased.

Despite taking three years of violin lessons, she spent every possible moment at the piano, eventually landing a scholarship to the Guildhall School of Music in London at 17. Exasperated with their headstrong daughter, her parents acquiesced to her desire to study music seriously, though she scandalized them — and her teachers — when she absconded to play music hall piano with Billy Mayerl and His Claviers. After a pitched battle, she convinced her parents to let her tour around the country with what was basically a vaudeville act.

When World War II broke out, she volunteered to play for the soldiers and ended up touring Allied facilities with a troupe headed by Fred Astaire, often getting close enough to the front to hear artillery fire. She met up with a different kind of excitement in 1944 when she encountered the dashing, highly regarded American cornetist Jimmy McPartland. Assigned to Special Services to play for the troops at the front lines, McPartland encountered Turner and they quickly fell in love.

Married in Germany the  next year, they settled in New York City, where she performed with Jimmy’s traditional jazz band. But the pianist was far too independent and musically curious to stick to any one style, and soon she began to strike out on her own, eventually landing a trio gig at a 52nd-Street nightspot, the Hickory House. While the marriage broke up in the 60s, Marian noted, “The divorce was a failure, because we remained close friends and remarried in 1991,” weeks before his death.

It was through the long-running gig at the Hickory House that McPartland began to develop a musical identity separate from Jimmy, forging an enduring association with the legendary club. She settled into the restaurant-cum-jazzspot in 1952 and held forth there with occasional breaks through 1960 (often working with drummer Joe Morello, before he gained fame in the Dave Brubeck Quartet).

Always open to new sounds, McPartland was deeply influenced by Bill Evans and his classic trio with Scott LaFaro and Paul Motian in the early ’60s. She toured with Benny Goodman in 1963, a frustrating experience that led to a fascinating behind the scenes article for Down Beat, a publication she contributed to regularly throughout the ’60s (her articles can be found in her Oxford University Press book, All In Good Time.) 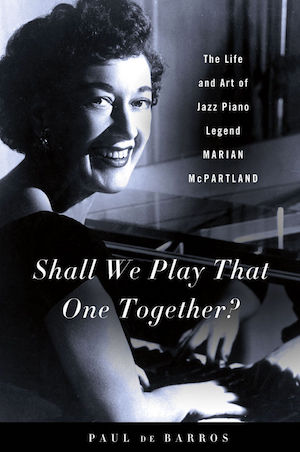 When record companies started losing interest in jazz with the rise of rock in the mid-’60s, McPartland created her own label, Halcyon. Her pioneering role as the first woman to start her own jazz label has been largely overlooked, but many of the exquisite, lyrical albums she made have been reissued by Concord on The Jazz Alliance label.

McPartland’s eventful and enviably productive life is the subject of one of jazz’s finest biographies, Paul de Barros’s Shall We Play That One Together?: The Life and Art of Jazz Piano Legend Marian McPartland (St. Martin’s), a title drawn from her signature query to Piano Jazz guests.

In an interview I did with McPartland in the late 1990s, she talked about her decision to reject the respectable middle-class life against her family’s wishes. “It just seemed exciting to go and be in show business, and to go on the road,” McPartland said. “I had to do it, although of course my parents were very dismayed. I went and I really never regretted it.”

CORRECTION: The date of Laura Klein's Piedmont Piano set, in Oakland, is March 16, not March 6, as a previous version stated.

Will the leading institution step up to support composers and foster new jazz voices in the Bay Area?