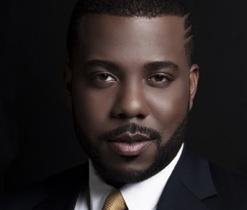 The Artistry of Aframerican Roland Hayes

The timing of baritone Sidney Outlaw’s performance of Wayne Oquin’s song cycle, A Time to Break Silence: Songs Inspired by the Words and Writings of Martin Luther King Jr. (2007), is significant. Not only does Outlaw’s Schwabacher Debut Recital (scheduled for Feb. 20 in San Francisco’s Martin Meyer Sanctuary at Temple Emanu-El with John Churchwell on piano) take place during Black History Month, but it also comes during the 50th anniversary year of two crucial events in U.S. history: the first Freedom Ride, which left Washington, D.C., for New Orleans on May 4, 1961; and the Metropolitan Opera debut of African-American soprano Leontyne Price, which took place on Jan. 27 of the same year.

Oquin, 33, a faculty member at the Juilliard School of Music since 2008, composed the 20-minute cycle expressly for Outlaw, four years younger and a Juilliard graduate. Commissioned by Juilliard for its 20th Anniversary Martin Luther King Jr. concert, it received its 2008 debut as part of the Marilyn Horne Foundation series in New York City. Outlaw has since performed the cycle in Germany, London’s Wigmore Hall, the Israeli National Opera House, Florida Grand Opera, and elsewhere.

Outlaw, who debuted here in San Francisco Opera’s 2009 Merola Opera Program, is the winner of the 2010 Concurso Internacional de Canto Montserrat Caballé. Listening to the clips on his website and elsewhere, the reasons become clear. His voice is gorgeous, the singing accomplished and heartfelt. According to Marilyn Horne, who has coached him and followed his career, “He has grown and matured and really comes into his own as an artist.” Outlaw acknowledges the change, and expresses excitement at being able to perform a “more mature” version of the cycle as he approaches the age of 30.

In addition to presenting an up-and-coming young singer, the recital brings the opportunity to delve more deeply into the wisdom of one of America’s most beloved teachers and prophets. It is is King's vision and eloquence that so impress singer and composer.

The Personal in A Time to Break Silence

In a joint phone conversation with Outlaw and Oquin, the composer noted that he initially became aware “what a great intellectual Dr. King was” when he minored in philosophy at Texas State University. After beginning graduate studies at Juilliard, he began reading the complete works of MLK, and “realized that there were a lot more speeches there than just ‘I Have a Dream.’”

Not long thereafter, Oquin discovered himself living next door to Outlaw in the dorms of that music school. The two soon became close friends. When Outlaw asked Oquin to write a piece for him, Oquin saw King’s speeches as the “perfect opportunity” to write something that would be meaningful for both of them.

The subject matter certainly resonated with Outlaw. “Dr. Martin Luther King Jr. is part of who I am as an American,” says Outlaw. “His words are relevant to all of us. They are a part of our roots, of where we come from as American people. I feel Wayne did an amazing job putting a piece of history to music so that both I and a pianist can help convey it to an audience. The cycle brings all types of people together. We are all Americans, and we are all here together as humans trying to live right and be happy.

Oquin handcrafted the piece specifically for Outlaw’s voice. Sometimes Outlaw was present as Oquin composed, and was able to try out the music immediately. There was never a question of tessitura and tempo being a perfect fit.

“Sidney may be too modest to say that the most important thing is that when he does this piece, he is MLK,” Oquin says. “It’s a very personal experience. I think of phrases that King used: ‘We are caught in an inescapable network of mutuality tied in a single garment of destiny.’ To express that, I try to weave music together that’s quite complex. When Sidney performs it, it’s an experience to behold.”

If Oquin is hardly Outlaw’s only fervent supporter — Marilyn Horne, in a recent phone conversation, calls the baritone she has taught “extremely talented,” and stresses how “very, very impressed” she was at his recital last fall — he has been instrumental in building Outlaw’s career. When Outlaw was having a tough time academically in certain classes, he offered aid. Realizing that someone with such a quick wit had to be very gifted, Oquin helped him in his ear-training class, and supported him as much as possible.

“I remember Wayne helping me with theory homework, sitting in the diner,” says Outlaw. “It must have been 1 o’clock in the morning. It was great. It wasn’t great then, but I look back at it now and I smile, and say, ‘Thank God for Wayne.’”

Oquin faced an enormous challenge in trying to distill almost 1,700 pages of King’s words into a 20-minute cycle. He decided to proceed chronologically. The cycle begins with “A Letter From a Birmingham Jail,” which was written at the beginning of the civil rights movement, and ends with King’s final sermon, “I See the Promised Land,” which he delivered the night before he was assassinated.

“It was where he compared himself to Moses,” says Oquin. “It’s a very powerful sermon. He was saying that ‘I may not get there with you, but we as a people will get to the Promised Land.’”

Oquin’s goal was to find sections of speeches that were most conducive to song. Often he found himself omitting many of the phrases for which King is well-known, instead choosing passages that have been frequently overlooked. The entire “I Have a Dream” speech, for example, has been “managed down” to four powerful paragraphs.

“Martin Luther King did not write lyrics,” says Oquin. “He wrote essays, he wrote speeches, he wrote sermons. What is spoken from a pulpit or podium is rarely effective in a concert hall, set to music. For example, in the ‘I Have a Dream’ speech, I left out where King says, ‘Let freedom ring from Mississippi ...’ because it was too specific. I didn’t know that my music could contribute to anything. But I do think my music can contribute to some of the lines I used — for example, ‘Now is the time to rise from the dark and desolate valleys, now is the time to lift our nation from the quicksands.’”

When I initially broached the subject of the King cycle’s special relevance to him as an African-American, Sidney Outlaw replied,

“My parents never raised me to see color. I didn’t look at people as whites or Asians or blacks. As a singer who travels around, I say, ‘Sidney is an American singer.’ Leontyne Price said she’s like an American troubadour. We sing the music of Schubert, we sing the music of Schumann, of Duparc. ... I never consider myself an African-American. I consider myself an American. And this is true American music. I am in love with it.”

Outlaw’s thoughts reflect King’s message, in which he spoke out against war and general economic injustice, and championed a fairer, more egalitarian society for everybody. Yet in the world of opera, in particular, worrying divisions between the races continue to surface onstage, as well as in audiences.

“Yes,” he said. “There are some hard instances when, you know ... I can’t control the color of my skin. Frankly, that’s not my problem. That’s whoever has that problem. What I can control is how I present myself, how I convey the text, how well I sing, how good a colleague I am. Those things, I think, triumph over the color of my skin.” He continued:

I try not to look at the negative things because it gets you down too much, and I don’t like to complain about things. There are people in worse situations. I’m working. What a blessing!

I stay true to the music. I love my composers: Handel, Mozart, Rossini. The bel canto repertoire is what I sing now, because those composers fit my voice. I just go with the flow. It’s very much playing by ear right now with the economy. But I have no woes or upsetting moments. I’m very blessed to be where I am now in my career.

An older singer’s perspective might be useful at this point, so I contacted Vinson Cole, a winner of the Metropolitan Opera National Council Auditions who sang at the Met, San Francisco Opera, and many top-tier European houses. Cole currently devotes the bulk of his time to teaching at the Conservatory of Music and Dance at the University of Missouri — Kansas City and the Cleveland Institute of Music. As someone committed to mentoring young singers, and deeply concerned that the number of African-American singers on the international stage is smaller than when he was singing around the world, Cole was eager to hear Outlaw’s responses to questions about racism. Not only did he understand where Outlaw was coming from, but he also found direct parallels between Outlaw’s approach in 2011 and his own in 1977.

“Was I aware of racism?” he answered in response to my question. “Yes. Did I do anything particular to try to change things? I did the best that I could with what I was doing on my job.

“I realized that if there was going to be a change, I had to be the very, very best I could be. I strove for that perfection in my music making, in my vocal abilities, in every way I knew how. My wonderful teacher put an ethic in me, so I had real focus and concentration on one thing: singing to the highest level that I could. I haven’t heard Sidney Outlaw sing, but he seems to be taking the same approach of excellence.”

Outlaw works constantly on technique, and in addition to studying with Horne he has worked with any number of teachers. He wakes up every morning and listens to recordings by Leontyne Price.

Outlaw’s seriousness is reflected, in part, in his other repertoire for the recital: a Haydn concert aria, Schubert’s three Italian lieder, three of Brahms’ most beloved and challenging songs, and three songs by Duparc, including one that is hardly ever heard, Le Gallop. At the end, inspired by the recitals of Kathleen Battle, he will sing spirituals unaccompanied.

Oquin says that when Outlaw gets going on spirituals, he is known to raise the roof. Meyer Sanctuary’s is extremely high, but Outlaw certainly has the gifts that can propel vocal-music lovers to their feet. What better way to appreciate how much he has grown as an artist in a few short years?