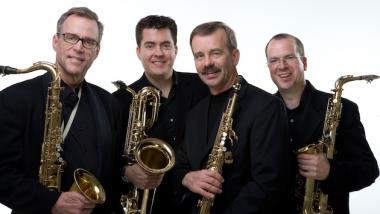 There’s something wild about saxophones. On a musical instrument safari, you might expect to spot one wandering alone in the wilderness, making deep, throaty mating calls to other saxophones — a sound that resonates beautifully in jazz, a musical style that thrives and blossoms on improvisation and free, uninhibited expression.

But the truth is, the saxophone, which was invented by Adolph Sax in Belgium around 1840 (way before jazz existed) was designed to be an orchestral instrument, kind of like a hybrid between the brass and woodwind families. And although a number of well-known composers at the time did embrace it and write for it, including Hector Berlioz, Gioachino Rossini and Maurice Ravel (think Bolero) it didn’t really become popular until the early 1900s, when American jazz musicians began their love affair with the instrument.

And yet, in the past 20 years, and even more so in the past 10, more and more “classical” saxophone quartets, and saxophone concertos, seem to be popping up. What’s up with that?

“I think one of the reasons saxophone quartets are growing in popularity, and you are seeing them more and more in concerts, is that we’re not afraid to play new music,” says soprano saxophonist Dale Wolford in a recent chat by telephone.  He is one of the founding members (in 2005) of the Bay Area-based Premiere Saxophone Quartet, which specializes in presenting new works by modern composers.

Wolford explains that because saxophone quartets are more willing to be open to new music, many new composers are happy to write for them, because they know their work will get performed.

“It’s more difficult to convince string quartets to play them, because they have so much great literature from the past,” says Wolford. “They don’t have to work at it like we do.”

In recent years, Wolford has noticed saxophone quartets winning some of the large chamber music competitions, such as the Coleman Chamber Music Association competition in Pasadena (the San Francisco-based Mana Quartet was the first saxophone quartet to win the Grand Prize there in 2009), the Fischoff National Chamber Music Association competition in Indiana, and the M-Prize at the University of Michigan School of Music.

Some quartets do, however, embrace both classical and new music. Soprano saxophone player Michael Hernandez, one of the founding members (in 2007) of the Mana Quartet, and a professor of saxophone at San Jose State University, believes that playing a variety of styles makes it easier for audiences.

“You have to show that you know what you are talking about,” says Hernandez by telephone. “So, if you play Bach and you play Mozart, then people are going to trust you more.”

Wolford agrees that saxophone has a place in classical literature. “Bach works really well on the saxophone,” says Wolford, “especially things from the organ literature because we’re working with pipes, so to speak.”

So what is attracting saxophone players to want to play in a quartet?

“It absolutely is the sound,” says Wolford, "and the tonal energy that you get from saxes. There’s a depth,” he explains, because saxophones are big pipes. “The overtone series from low to high, because we are such matched instruments, is really powerful,” he adds.

“You can play as quietly as you can, and as full, and you can really use the total palette of the saxophone when you’re playing with each other, which is something you can’t always do when you’re playing with other orchestral instruments,” says Hernandez. “But when you play with other saxophones, it’s kind of like an ugly duckling that found out that it is a swan — there’s no holding back.”

Daniel Canosa, founder and music director of ECHO Chamber Orchestra and Marin Baroque, loves the sound of the saxophone and believes it fits well into many genres. “From the wind instruments, the saxophone and the clarinet are the closest to the strings,” says Canosa. “They have more flexibility and this range — this level of intensity — that allows for the expression to be much closer to the voice.”

Canosa recently featured Premiere at a concert of baroque and jazz music and is collaborating with Mana for an upcoming concert on February 4, which will include Philip Glass’s Concerto for Saxophone Quartet.

“It’s such a great platform for the sax and he really catches the different colors and moods of the saxophone quartet,” says Hernandez about the concerto, adding that it’s one of Glass’s most programmed works.

Audiences are slowly but surely being exposed to saxophone quartets, though many concert producers are still hesitant to book them — they’re not entirely certain that saxophones will sell as well as established string quartets. But Wolford and Hernandez agree that people are learning to appreciate the saxophone.

“Many people hear the chamber ensemble and say that they had no idea that sax could sound that way — orchestrally — it’s a sound they are not used to,” says Hernandez

“People are becoming more willing to try something new,” he continues, “especially as you see more millennials taking positions in music administration and getting into roles like artistic director.” Many of them are already into new music, and therefore more willing to experiment and expand musical boundaries when planning concerts.

“That’s really the core of our mission,” he says, “to show the true sound of the saxophone to audiences. It just takes educating the audience and other musicians about what’s out there.”