David Gockley and the Golden Age of American Opera

Are we in the middle of a golden era of American opera?

The thought ran through my head as I watched Jake Heggie and Gene Scheer’s enthralling Moby Dick at the San Francisco Opera. Everybody from irascible critics to longtime audience members to relative opera neophytes seemed to love this production — the people I spoke to reacted with variants of “awesome.”

The show played eight performances at 85 percent of capacity: nothing short of astonishing, considering its newness and the distractions of last October. A taped performance will air later this year on PBS’ Great Performances. S.F. Opera’s General Director David Gockley saw it coming:

Maybe we’re arriving at composers who are getting more skilled at making big, sweeping, lyrical arcs and lots of diversity over the course of an evening.

I was the first person to hear the score, because Jake lives here [in San Francisco]. I had commissioned his End of the Affair [Houston, 2004] and the piece that became Three Decembers [2008]. But we had a number of premieres scheduled when he brought me Moby Dick, so I said, ‘We’ll get involved with it, but we can’t do it first.’ I was thrilled to be a part of it, even though we came fifth of the five commissioners [of the production].

Usually, that would be enough for one season, but Gockley has three world premieres scheduled in a period of seven months from March to October (Nolan Gasser/Carey Harrison, The Secret Garden; Mark Adamo, The Gospel of Mary Magdalene; Tobias Picker/J.D. McClatchy, Dolores Claiborne). And while that coincidental pileup of new work leads the way, it’s by no means the sum total of activity in new-opera production: Doubt by Douglas Cuomo premieres this month at Minnesota Opera; Terence Blanchard’s jazz opera Champion opens in June at Opera Theatre of St. Louis; and Theodore Morrison’s Oscar opens at the end of July at Santa Fe Opera.

More important, some of this new work is being taken up by other companies. If it’s good, it can survive and thrive. Heggie’s new opera, if it makes it, will join his Dead Man Walking (2000), commissioned by the S.F. Opera’s then-General Director Lotfi Mansouri, and still going strong, with performances and new productions every year.

So, what happened to change the dismal mid-20th-century outlook into the flourishing field of today? An entire history is in the making, with many channels. But you should never underestimate the power of a commission, and on that, well, score no one has been more involved in the renaissance of contemporary American opera than David Gockley, first at Houston Grand Opera and now in San Francisco. By the time Italian composer Marco Tutino’s La ciociara takes the stage in 2015, Gockley will have personally overseen 40 new operas from inception through production. That legacy stretches back to the 1970s, and his sustained commitment has had a catalytic effect on the entire American opera scene, not least of all because, in a complicated endeavor such as opera, composers don’t usually do their best work right off the downbeat.

“Maybe we’re arriving at composers who are getting more skilled at making big, sweeping, lyrical arcs and lots of diversity over the course of an evening.” – David Gockley

When Gockley took over the management of the Houston Grand Opera in 1972, he was 29 years old, an age that is almost inconceivable now as a company director anywhere. He was a fan of the more-realistic opera stagings at New York City Opera, and had discovered a love for Carlisle Floyd’s masterpiece, Susanna. He had an interest, in other words, yet no definite program in mind, as he prepared his first seasons. He continues:

In the very first summer season in our outdoor park, I produced Susanna, Elixir [of Love], and Postcards From Morocco [by Dominick Argento, 1971, commissioned by Central — now Minnesota — Opera]. And then in my first season did Of Mice and Men [by Floyd] and already was on the track of our first commission [Thomas Pasatieri’sSeagull, 1974].

Then we fell into doing [Scott Joplin’s] Treemonisha, and then Porgy [and Bess], and that series of experiences gave me what I considered to be a niche, a raison d’etre, within the broader opera field — to make a case for the American repertory. And over a two- or three-year period I realized That is what I’m going to be remembered for! 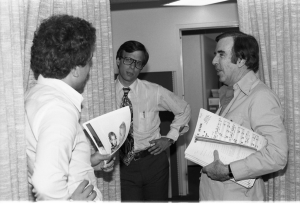 When Gockley began, there were precious few composers who were likely targets for operatic commissions. He stuck with Carlisle Floyd and expanded outward.

[Composers back then] didn’t have the experience, and their training was at that point largely academic. A number of them were employed by universities, and they had to have an academic caliber of work. If something was thought of as being too ‘popular’ or pandering, they were slammed, even within their own circles.

My theory of what broke us out of that is Philip Glass and his connection with theater in the 1960s.

Glass (along with Steve Reich, of course) cultivated connections outside academia, and built an audience for their music. After the breakthrough success of Glass’ Einstein on the Beach (1975) and then Satyagraha (1980) and Akhnaten (1983; American premiere in Houston, 1984), the way for others had been paved. “You could play [Akhnaten] in front of a traditional audience,” Gockley remarks, “and it wouldn’t send them into paroxysms. Although when Akhnaten appeared nude, bathing in the Nile, with his hermaphroditic body, with his little pee-pee, there were a lot of guns trained toward me in Texas.”

Some of this new work is being taken up by other companies. If it’s good, it can survive and thrive.

Commissioning an opera isn’t like ordering up a string quartet, or even an orchestral piece, because of the size of the budget. Larger opera houses conceive of some new works as prestige pieces, built to show off their wares and grab headlines. Several of the commissions from the Metropolitan Opera over the past two decades fall into that category, like The Voyage (Glass and David Henry Hwang, 1992), or Tan Dun’s and Ha Jin’s First Emperor (2006) — extravaganzas that were so much about the Met’s superior production values, star casting, orchestra, and chorus, that the operas will likely be of small interest to any other company.

Yet Gockley, in Houston, was running a midsize company, so his priorities were, and are, completely different:

First of all, I’m looking for a composer, like a Heggie, who is nonacademic, who makes his money by attracting audiences to a commercial situation, where people are paying a lot of money for tickets and you have a 3,000-seat auditorium to fill. So you want someone with the craft and the talent to be able to sustain a three-hour evening, with the kind of lyricism that we saw in Moby Dick. One of the banes of my existence is endless vocal declamation over a busy orchestral accompaniment. Why are [some] composers afraid to just sit there in the moment and create a lyrical piece that balloons out of time?

“Why are some composers afraid to just sit there in the moment and create a lyrical piece that balloons out of time?” – Gockley

And then I’m looking for a good story, and if the story has resonance with literature, film, myth — that helps to presell the piece. So Dead Man Walking (book, well-known film, controversial issue); Bonesetter’s Daughter [Stewart Wallace/Amy Tan, 2008] — that did really well, in terms of audience, 94 percent of capacity. Heart of a Soldier [Christopher Theofanidis/Donna Di Novelli, 2011], although it was not well-received by critics — the fact that it was a book, and based on events that everybody had experienced in one way or another, made the project more attractive. 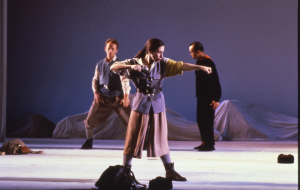 That’s not to say that Gockley is no risk-taker; he did, after all, makes gutsy calls on John Adams and Alice Goodman’s Nixon in China (1987), back in the days when director Peter Sellars was an enfant terrible. Meredith Monk’s dreamlike Atlas premiered in Houston in 1991. Of course, as Gockley says, he hedged his bets — Atlas, for example, was sold as an add-on to subscriptions, in effect inviting subscribers to “opt in.” And having the Wortham Studio Theater, which he made happen in Houston, was a boon to the commissioning program, one that many larger companies probably wish they had.

Certain strings are attached to each Gockley commission that are meant to safeguard the company investment but that can draw-out negotiations right from the start. The man is extremely picky about subjects and their initial treatment. And he says “no” a lot, which sometimes causes a composer to pull out altogether, as Jennifer Higdon did last year. “I said ‘no’ to Tobias Picker about five times. I said ‘no’ to Mark Adamo (in terms of what the project was and did I think it had legs, and did I think it was the right time).”

I try not to make a commitment until I have a prose scenario that shows how it’s structured, where the acts break, what’s the length, what’s the number of performers, with an eye toward economics. Because it’s absurd to write a piece with 20 characters today. So I set the parameters, look at the scenario. I feel I can ask a composer to write a couple of sample pieces, and then have the commission structured so that you deliver such-and-such by such-and-such-a-time, and we have at that point 30 days to critique it. And we have the opportunity at any particular juncture to say, ‘We’re outta here.’ That doesn’t often happen, because by that time we’re so bought into it that we just keep moving.

I feel like I’m kind of an editor. I try to get a music director like Patrick [Summers] or, in Houston, John DeMain, who are very theatrically savvy.

Gockley’s entire ethos for new work reminds you of a hard-nosed Broadway producer — not far from the truth, when you consider the affinity he has had for Broadway products in the opera house: Future SFO seasons will include Show Boat and Sweeney Todd. Like a true showman, he shoots barbs at “high art”: “I have no taste,” he jokes.

But he does have taste, and he also has no ego when somebody else makes a find. He’s pleased with the recent operatic resurgence, not just with his part in it. “There are new, small operas growing all over, like Opera Parallèle right here in the city,” says Gockley, contemplating the last 40 years. He feels bullish about American opera’s new golden age.

“There’s not anybody who doesn’t want to write an opera. Forty years ago, maybe you could think of three or four.”