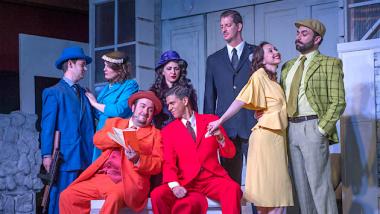 Remember the old Andy Hardy movies with Mickey Rooney and Judy Garland? They were a series of musicals in the late 1930s and early 1940s that always had one key moment in common — at some point bright-eyed, bushy-tailed Mickey would turn to charming, doe-eyed Judy and declare, “Let’s put on a show!”

Since 2011, Pacific Opera Project (POP) in Los Angeles has been working pretty much along the same lines, presenting cleverly updated, limited-budget productions of operas and musicals in a dinner theater format, presenting a range of offerings including Trouble in Tahiti, Sweeney Todd — their first surprise hit in 2012, their beatnik take on La Boheme (renamed The Hipsters), a People magazine staging of The Barber of Seville, Tosca, The Turn of the Screw, The Marriage of Figaro, The Mikado, a gold rush setting of The Merry Widder [sic], and a Star Trek-inspired production of The Abduction from the Seraglio.

“When we started out,” the company’s founding director, Josh Shaw, recalls, “I wanted to create a company where we could provide a showcase for L.A.’s deep pool of young singers. I’d been singing in L.A. for a couple of years and I saw my colleagues, who were so talented and had spent so much money getting their musical education and training, doing productions where their time was wasted and their talent wasn’t appreciated. That’s how POP started, as a way to give singers a better opportunity. I also wanted to attract an audience that included people that had never been to an opera.

“We found the best way to do that was with modernized productions where the audience could identify with the characters, and to serve food and wine, lots of wine. We started with $3,000. What show can we do for that? Trouble in Tahiti. We did it and it was successful. So we said, let’s do it again. That was the beginning.”

On April 13, Pacific Opera Project will present its latest wine-and-dine spin on the classics — a cartoon-colored, Tommy-gun-saturated production of Mozart’s Don Giovanni conducted by Modesto Symphony’s associate conductor, Ryan Murray. The show will be presented at the Vortex, a converted warehouse in downtown L.A.’s industrial sector.

There was a time when dinner theaters were a common part of the entertainment landscape. “In 2004, when I was just out of grad school,” Shaw recalls, “I often sang in dinner theaters. Some of them were very elaborate with full course meals. I think it’s a great model. I’m surprised it’s not making a comeback. At POP we don’t do a full dinner, more like an antipasto with plenty of wine. People sit at tables. They love it. And they bring their friends, which has helped build our audience. When we did La Boheme we set up 23 tables and bought 50 bottles of wine. For Don Giovanni we’ll have 70 tables and truckloads of wine!”

Shaw, who — not surprisingly — worked for a while in the catering business before becoming a full-time director, is no stranger to Don Giovanni. This will be his second staging of the opera for POP and the fourth production he’s staged in the last year including stops at Queen’s City Opera in Cincinnati, the South Illinois Music Festival in Carbondale (where he directs every summer), and Salt Marsh Opera in Connecticut.

Of his first Don Giovanni staging for POP in 2011 he recalls, “That production had nothing to do with concept and everything to do with budget. I had this idea to put Don Giovanni in a red suit and Leporello in orange. But the only brightly colored suits I could find to rent in L.A. all looked like zoot suits, which made the men look like gangsters. That’s where the idea first came from.”

Since then, Shaw’s concept and company’s production budget has grown substantially. “This production is more inspired by the 1990 movie, Dick Tracy, that starred Warren Beatty. There’s a lot of serious stuff and violence in that movie. But there’s also comedy, so it lines up really well with Don Giovanni.”

The unstructured space of the Vortex, Shaw feels, is perfect for POP. “It’s a big open space that we can make our own. We’re at our best when someone hands us the keys and says, ‘Go crazy.’”

The cast for Don Giovanni will include Adrian Rosas as Don Giovanni, E. Scott Levin as Leporello, Daria Somers as Donna Elvira, Saira Frank as Donna Anna, Robert Norman as Don Ottavio, Tiffany Ho as Zerlina, Luvi Avendano as Masetto, and Andrew Potter as the Commendatore. It will be sung in Italian with projected English titles.

So, it’s time to set your two-way wrist radio. “Leporello? Can you hear me now?”

Elevated and cushioned traditional tiered theater seating ranges from $15–25. Individual seats at communal tables with shared bottles wine and a small plate of food ranges from $35–45. Tables with a bottle of wine and snacks range from $60 for a general table for two people up to $200 for a premium table for four people.

Tickets can be purchased by visiting the Pacific Opera Company website or by calling (323) 739-6122.