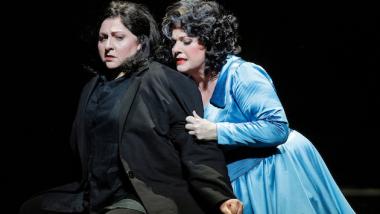 San Francisco Opera’s recent run of Richard Strauss’s Elektra received rave reviews from the critics, and inspired a small coterie of opera-goers to attend the opera more than once. I was one of these, seeing four of the six performances; if it hadn’t been for little things like work and the jujitsu classes I teach every Tuesday and Thursday night, I probably would have seen the entire run.

I can see that side-eye look you’re giving me, and, believe me, I understand. Not many operas and casts inspire this kind of dedication. I’ve been a repeat attendee in the past, for SFO’s 1998 Tristan und Isolde, 2009’s Il Trittico, and 2015’s Les Troyens, each of which I attended approximately three times. (Ahem. I saw the Troy scenes of Troyens four times so that I could see the Cassandre of Michaela Martens and San Francisco Symphony’s Missa Solemnis the same evening. Yes, I know: side-eye.)

The Elektra run merited multiple viewings for several reasons. For one thing, the Greeks had a word for it: catharsis, the process of releasing strong or repressed emotions. In these fraught times, we could all use a little catharsis, and what better vehicle than an opera drawn from Greek tragedy? For another, seeing any opera from different locations in the War Memorial Opera House gives you a different sonic experience and visual perspective on the work being performed. In this run, the OperaVision direction was particularly beautiful and acute.

San Francisco Opera last presented Elektra 20 years ago, in the 1997–98 season, so for fans of the opera, there’s concern that another two decades might pass before we can next see it locally. Keith Warner’s modern dress production, set in a museum, deviates radically from Hugo von Hofmannsthal’s  libretto, layering a modern woman’s torment over her father’s suicide over the classical story of Elektra’s desire for revenge for the death of her father Agamemnon. The detailed complexity of the production genuinely could not be taken in on only one viewing.

But you didn’t have to love the production to see it more than once. John Fenster remarked that “This was an exceptional cast and a strong conductor in one of my favorite operas; this is the sort of opportunity I’d consider traveling for, so I had to take advantage of it being across the bay. I don’t think the production changed significantly over the run, but my reaction to it evolved. I was upset during and after opening night but was able to make peace with the production to the point that I could put up with it to hear this cast in this score.”

And you didn’t even have to love Strauss to see this opera again and again. “I’m not a Strauss fan, so I was surprised that I was compelled to go to this opera three times,” reported Charlise Tiee. “That’s a lot for me right now, with a 4-month-old at home. For comparison, I went to five of the six Jenufa performances during the summer of 2016.”

“This was opera at its best: a slick, clean production, excellent singing, and great conducting and playing,” Tiee continued. “So it was strong both as music and theater. It was also so much fun to see all the other opera fans at the performances and to share the experience with you and others! I really wish we could have more performances like this at S.F. Opera.”

Everyone I talked to about the production called out the extraordinary cast, headed up by soprano Christine Goerke in the title role. Returning to the War Memorial Opera House after an inexplicable absence of 11 years, she delivered one of the greatest performances of my many years of opera-going, combining magnificent vocalism with breathtaking physical involvement, dramatic spontaneity, and deeply specific and musical attention to the text.

The rest of the principal singers were on the same exalted plane, as individuals and an ensemble. Adrianne Pieczonka’s  radiant and gorgeously-sung Chrysothemis provided the perfect contrast to Goerke’s Elektra. Michaela Martens presented a haunted and decayed Klytemnestra, while Alfred Walker’s Orest was sternly implacable in joining Elektra’s thirst for revenge.

Also on the musical side, debuting conductor Henrik Nánási conducted beautifully, holding the enormous orchestra and voices in perfect balance and keeping that orchestra miraculously transparent. Seeing four performances meant I could give the orchestra and the beautiful score more attention than I could if I’d seen Elektra just once. Nánási was kind enough to meet with a crowd of Elektra mega-fans following the September 22 performance, and said in an email forwarded by the Opera that “It was wonderful to share some thoughts with these fantastic opera fans who came to see this Elektra, some as many as five times, which is truly extraordinary. I’m very happy that the love, the passion and the enthusiasm we put into this production has resonated so deeply with the SFO audience. I am very grateful for their tremendous support. This is why we make music!"

Asked why he’d attended two performances, Patrick Vaz said, “I’m not sure I can even articulate why I went back for this one except I just felt strongly that it would be a mistake to have this confluence of great singers and great production and relatively rare opera and not to take advantage of it while I could. By that time in the run it began to feel almost like a ritual to go more than once. I’ve seen Elektra before, several times, but this production, which I loved, is so detailed and thought-provoking (and emotion-provoking) that it repays repeated viewings.”

Terri Stuart, president of the Wagner Society of Northern California, had a virtual litany of reasons she saw all six performances. “Every show had something different — vocal colorations, interactions, movements. At every show I saw different facets of each character and I could focus on the show more intensively. The show changed over the run as the singers became more comfortable in the production. Reactions to the show from my fellow opera obsessives directed me to examine the characters differently. Because I wanted to and I could do it!”

We’ve all heard that art is life-changing. For at least one Elektra attendee, this production cast new light on her youth. Says Cristin O’Keefe, “I had a friend, a number of years back now, who was heavy into the goth scene. And she would talk about how a number of people who had seriously traumatic childhoods were attracted to the scene. Because it let them play with and exorcise their darker emotions from their past, while also providing them with a safe and comfortable space to let their inner child play. I don’t think I’ve ever had a clearer sense of what she was saying as I’ve had watching this Elektra.

“During the first time I watched the opera, I connected with Elektra on the same level as the woman in the museum who finds herself re-enacting her own trauma through her engagement with the archetypal story of Elektra in the exhibit. At a cathartic level, I remembered being that bitter and that angry as a teenager, after a family trauma. Essentially, I recognized my younger self in the Elektra on the stage. It also made me realize how hard I must have been to live with for those in my family who were living in the same house with me. And afterward, I had a deep sense of empathy for them.”

And now that the Elektra run has ended, some of us are feeling bereft. As Vaz said “Musically, my second performance was even more powerful than the previous one. It feels like a real loss that I can’t just keep on going to this Elektra.”

I feel just the same way.