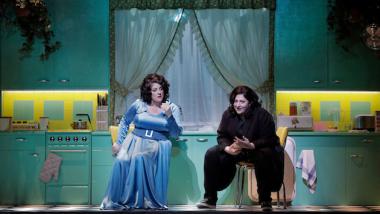 For those unfamiliar with Elektra, Strauss and Hofmannsthal goes far beyond shabby little shocker bounds to retell the myth of Elektra’s revenge on her mother. By subverting the romantic paradigm that Strauss’s music customarily exalted, they explore the truth behind the mask and bring humanity’s dark side into the light of day. The wilder and more awful Hofmannsthal’s take on the myth gets, the more powerful Strauss’s music becomes.

Years after the murder of Elektra’s father, King Agamemnon, by her mother, Clytemnestra, and stepfather, Aegisthus, Elektra longs for the return of her younger brother, Orestes, whom she is convinced will avenge her wrong by murdering the regicides. Shortly after the opera opens, Elektra makes her entrance with her famously unhinged soliloquy (“Allein! Weh, ganz allein”) in which she repeats the name of her murdered father like a mantra. Soon thereafter, she tries to enlist her sister in her plans for ultimate revenge. Orestes does eventually appear, but revenge brings a far different release than anyone had envisioned.

Director Keith Warner’s production, vividly presented by revival director Anja Kühnhold, and Boris Kudlička’s set create an original context for the drama. Set in a history museum, where key props (e.g., the axe) are housed in plastic display cases, the show — a coproduction of San Francisco Opera, Prague National Theatre, and Badisches Staatstheater Karlsruhe — honors ancient myth within a modern context. It’s a brilliant concept that mixes high art with the profane, and it works.

Goerke’s headshots give no hint of how mobile, athletic, and animated she can be onstage. Dressed in what resembles a black raincoat and sporting sneakers, she bounds back and forth and rolls around while assuming one animated, increasingly disturbed expression after the other. Sometimes she’s wide-eyed raving, and other times little lost girlish. As Goerke’s voice, face, and form serve the characterization, she untiringly produces volumes of deep, colorful sound in which love and madness meld into one. It’s impossible to keep your eyes off her.

Pieczonka is her physical and vocal opposite. Bedecked like a Barbie doll awaiting the high school prom or cotillion ball that never comes, she uses her strongly focused voice, perfect posture, and oh-so-blond hairdo to illustrate another route that a woman so wronged might take. Her Chrysothemis is not merely sweet and weak of will. Rather, as we come to understand toward the end of the opera, she is a deeply violated woman who has developed her own coping mechanisms to keep her act together.

Martens, making her role debut, was extremely strong. Eschewing the ultrademented route that some notable Klytemnestras have taken in the past — Astrid Varnay in the unforgettable movie of Elektra from director Götz Friedrich comes to mind — she could actually arouse sympathy as well as disgust.

That one of the trio’s partners in crime, Henrik Nánási, was conducting Elektra for the first time was astounding. Rather than simply going for broke and driving the orchestra into one continuous frenzy, Nánási spent considerable time bringing out the softer romantic elements of the score. Strain after strain of what seemed like sweet little songs highlighted the tender, fragile side of the wronged Elektra, and made her outbreaks of fury and accelerating madness all the more plausible.

There were some exceptional voices amongst the five maidservants, mezzo-soprano Jill Grove especially, but the women’s initial placement offstage made it difficult to distinguish among them. By the time they entered, they certainly looked damned and done.

On the male side, bass-baritone Alfred Walker (Orest) lacked the strength of voice and personality that would have made for a perfect fit amongst such strong women. Tenor Robert Brubaker (Aegisth), on the other hand, had just the perfect, slightly sickly voice for his role. How deliciously he was dressed by Kaspar Glarner you’ll have to discover for yourself.

There have been many great Elektra productions since the opera’s 1909 Dresden premiere. This is one of them.