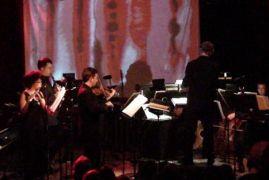 Field Notes From the Bleeding Edge

Will an Experiment Become a Trend?

About a year ago, I heard the UC Berkeley University Symphony perform Mason Bates’ Rusty Air in Carolina. It was one of the more unusual concerts I’d been to in a while, not because of Bates’ trademark combination of symphony orchestra and electronica, but because a good third of the crowd consisted of people who could not have been much past 17 or 18. As someone who has attended most of the University Symphony's concerts over the past seven years, I’m comfortably certain that Bates was the main attraction for these newcomers to classical music’s traditionally graying audiences. This mixing of new genres and old has also worked in reverse. When Bates' Feb. 1 event, "Mercury Soul," took over the Mezzanine, a nightclub tucked away just south of Market Street in San Francisco, I was intrigued to find older folks in attendance, some dressed as if for the symphony, standing politely on the fringes of the Mezzanine’s dance floor. The advantage of a concert hall is that its behavioral codes insulate the listener from distractions, allowing them to focus their attention as intently and abstractly as possible on the music. By the same token, the advantage of a club is that it allows the listener to experience music as a social activity, encouraging the audience to engage with the music however it deems desirable — dancing, socializing, perhaps drinking. You might have thought the goal of the "Mercury Soul" project was to combine the best of both worlds and create an environment in which listeners could focus on the music in a social environment. The opposite turned out to be the case, however. The social space (aided by three strategically placed bars) meant that few people were focusing exclusively on the performance. But the nature of the music — which included works by Ligeti, Webern, and Nancarrow — meant that no one was really dancing either. Perhaps I have unreasonably grand expectations of “art installations,” but I was expecting something a little more obtrusive (in a good way) from the visual stimuli that "Mercury Soul" provided. Some of the innovations worked quite well, such as the “performance stations” where the various performers were positioned: The larger ensemble pieces were performed from the main stage; the wind ensemble was stationed on a platform in the middle of the dance floor; the string quartet was tucked against the wall in a sort of cagelike construction; Bates and his DJ equipment were stationed in the approximate center of all the action.

But other ideas did not seemed to have been exploited as fully as they could have been. During the fourth of the evening’s five sets, four or five tuxedo-clad men with floor toms stood on elevated platforms interspersed around the perimeter of the room for a percussion transcription of Nancarrow’s Studies for Player Piano — which in practice consisted of the players exchanging simple rhythmic patterns. A more involved rhythmic texture might have made this a little more engaging, but as it was, listening to the piece was akin to watching a tennis match, with little to propel the audience except following the rhythmic patterns as they passed from percussionist to percussionist. Although this was the official “premiere” of "Mercury Soul," the group has experimented with its venue- and genre-blurring project in Berlin with members of the Berlin Philharmonic. I wonder whether the combination of symphonic music and electronica elicited more engaged responses from German audiences. It's hard to say whether its San Francisco incarnation “worked,” because it isn't clear that "Mercury Soul" was trying to elicit any specific response. In theory, that is a good thing. Because of the experimental nature of the event, its organizers probably preferred to leave things open-ended and just “see what happens.” But in practice, ambiguity doesn’t necessarily translate into excitement; when a large crowd doesn’t know what to do, it tends toward inertia. I'm confident that audiences would eventually become more engaged if exposed to events like "Mercury Soul" more regularly, and I hope we'll have more chances to do so soon. But for the time being, the project is still in its “experimental” phase. Only time will tell if it will achieve results that can be comfortably called successes. — Noel Verzosa

The venerable New York group Bang on a Can brought its all-day marathon concert to San Francisco for the first time on Saturday. In addition to importing its own musicians, the marathon displayed a nice cross-section of local groups and artists, including Edmund Welles, Carla Kihlstedt, Amy X Neuberg, Pamela Z, and Cheb i Sabbah, who — though I might be biased as one of these locals as a member of the Edmund Welles bass clarinet quartet — more than held their own against the out-of-towners. The audience was diverse. I saw many of the people I usually see at new-music concerts: New-music performers; students from UC Berkeley and San Francisco Conservatory; and organizers and promoters of the local new-music scene. But I also saw many more different kinds of people, including young hipsters, some of whom I recognized from playing at clubs in the Mission, as well as plenty of relatively ordinary, respectable-looking, middle-class, middle-aged folks, some with children in tow. Most people seemed to be enjoying themselves, wandering into and out of the theater, exploring the other exhibits at Yerba Buena Center for the Arts, taking a break to bask in the glorious sunshine in Yerba Buena's gardens. The entire event had a friendly vibe. Going into it, I had been nervous about meeting all these hip New Yorkers, but people like Julia Wolfe (one of the founding composers of Bang on a Can) and Evan Ziporyn (clarinetist with the Bang on a Can All-Stars and a composer, as well), who both spoke frequently between sets, struck me more as down-to-earth, and even sometimes endearingly geeky, rather than aloof. It’s hard to judge based on the relatively small number of selections from the Bang on a Can-ers (its New York marathons now run 24 hours), but it seemed to me that the locals did, in fact, more successfully integrate contemporary classical music with vernacular forms. While most of the Bang on a Can selections in the marathon in San Francisco would fit pretty squarely into the contemporary classical genre, even if they clearly draw influence from the vernacular, groups like Edmund Welles and violinist/vocalist Carla Kihlstedt’s ensemble genuinely exist in a nether region between genres and are pretty difficult to pin down. Kihlstedt makes frequent appearances both as a new-music violinist with such groups as the San Francisco Contemporary Music Players and the heavy-metal band Sleepytime Gorilla Museum. Her own ensemble blends the drive and visceral intensity of rock and heavy metal with great attention to detail, varied and subtle colors, and unpredictably quirky melodic and harmonic shifts. Similarly, Cornelius Boots, the founder and composer/arranger of Edmund Welles, has classical and jazz conservatory training, but has also played in heavy metal and funk bands for most of his life. Performing with Edmund Welles calls for the technical precision and music-reading skills of a classical player, and also the ability to aggressively groove. Since I’ve been in the group, I would say our two most successful shows have been opening for a heavy metal band and performing at Berkeley Chamber Performances, a concert series primarily of classical chamber music. Both environments nicely demonstrate the range of settings in which this music can work. And Edmund Welles and Carla Kihlstedt are but two examples of a thriving Bay Area scene in which music flourishes in these gaps between established genres, between art and popular music. I mean no disrespect to Bang on a Can, but seeing them juxtaposed with our local artists made me appreciate just how unique and vibrant a scene we have here in the Bay Area. It will be exciting to see how these same local composers and performers, myself included as codirector, will build on this Bang on a Can experience and reconfigure the lines between genres of music at the upcoming Switchboard Music Festival, an eight-hour marathon concert on March 30. — Jonathan Russell

Those who arrived to New Century Chamber Orchestra's "Rewind" concert on Jan. 19 found no assigned seats printed on the tickets. People began forming a line a half-hour early simply to claim a spot. Even once inside the hall at Yerba Buena Center for the Arts, things remained intriguing. For one, the chairs were arranged on all sides of the makeshift stage in the center of the room, and for another, a giant, oscillating mechanical sculpture was hanging from the ceiling. People who are accustomed to New Century Chamber Orchestra's performances were likely unsurprised. As Paul Haas, the guest conductor for "Rewind," expressed it, NCCO is known for "treading ground that nobody else really does," and is able to do so because the musicians are "of the highest caliber and willing to try anything." The same might be said of Haas' own ensemble in New York, called Sympho. "Rewind" was originally created for Sympho, after all, and NCCO's performance was its West Coast premiere. "Rewind" targets under-40 audiences, and while this one was not entirely young, it was noticeably younger than attendees at many classical concerts. Preconcert, the sparsely lit hall and ambient electronic music fit well with the younger crowd, many in jeans. The performance space itself, including the seating — which deliberately placed audience members just feet away from the performers — erased the stodgy stiffness found in many traditional concert halls. The concert was supercharged with colored lighting, Reuben Margolin's kinetic installation, surround-sound speakers for Mason Bates' electronica, and a nonstop performance by NCCO. With "Rewind," Haas aimed to create what he calls "an immediately understandable" narrative by presenting pieces that move backward in time, beginning in the late 20th century and ending in the late 17th. In tandem with all the modern additions, the organizers intended, says Haas, to "keep what's great about classical music while bringing it up to date." Judging by the standing ovation the concert received, "Rewind" succeeded at engaging its audience. In particular, the audience appreciated Anne Akiko Myers, the concert's solo violinist, Bates' electronic additions, and Margolin's art. The multimedia event seemed a hit. Then again, why should it not be? Says Haas, "I'm a little surprised that what we're doing is so 'new.' It just seems obvious that we should use what works." — Jessica Balik
Noel Verzosa is a visiting assistant professor at California State University in Sacramento.