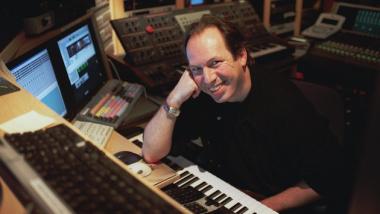 That’s how Christopher Nolan’s film Dunkirk, about the desperate efforts to evacuate thousands of allied troops from France during World War II, begins: with the insistent ticking of a pocket watch — the perfect metaphor for time running out.

But unlike traditional war films, which have tended to embrace Wagnerian-scale musical heroics (literally, in the case of Apocalypse Now) Nolan, composer Hans Zimmer, and supervising sound editor Richard King made the decision to take Dunkirk “in a very different and cutting-edge direction.” In doing so, they created a film that may be seen as a landmark in the rapidly evolving relationship between film directors, composers, and sound designers.

From the earliest stages of Dunkirk’s development, Nolan tasked Zimmer and King to create a series of intimately immersive sonic landscapes that would heighten the audience’s sense of anxiety and apprehension.

“Christopher wanted the audience to feel uncomfortable,” says King, whose Academy Award nominated credits include The Dark Knight, Interstellar, and Inception (all directed by Nolan). “He wanted the practical sounds in the picture to provide the texture — the dive bombers, sinking ships, explosions, and the ticking clock. He wanted the music to provide the driving force. The sounds would be what the characters are hearing. The music would be what the audience hears.”

By combining computer-generated sounds and samples with traditional orchestration and extended instrumental techniques (a double bass and 14 cellos playing in their highest and lowest registers), Zimmer created a score that emphasized anxiety, texture, and metric power over melody. In the final sound mix (which took weeks to achieve, with more than one case of frayed nerves, Zimmer has recalled) Dunkirk’s sound design and score morph so seamlessly together that the sound effects become music and music becomes a sound effect. Listen carefully and you’ll notice that the boats and motors are in the same tempo as the music. 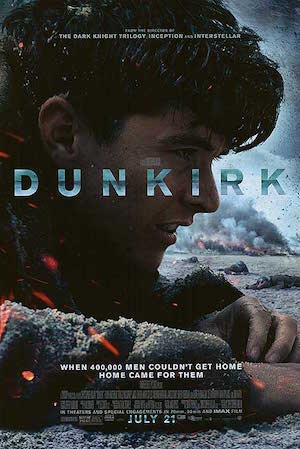 “Bringing the sound design and music for Dunkirk together was a fascinating process because Hans’s score is not what you’d expect. It’s not the type of score that sticks in your memory,” King observes. “Hans uses a lot of nonmusical sources in his scores. It was all meant to be a frenetic experience until the final scenes when you hear “Nimrod” from Edward Elgar’s Enigma Variations.

Zimmer has referred to “Nimrod” as England’s “emotional anthem.” And what better music could there be to accompany Churchill’s gruff, sonorous voice proclaiming, “We shall fight on the beaches ...”?

Both men, however, credit Nolan for being the real conceptual master of the film.

“I asked Hans not to write any emotional music,” Nolan said in an interview with The New York Times (7/26/2017). “It’s all about suspense and tension and not at all about emotion (until the end). Of any of the films I’ve done, this is the tightest fusion between music, picture, and sound effects.”

The challenge facing Zimmer was how to compose music that could work with King’s sound effects to create an ever rising, never resolving feeling of tension. The initial inspiration was the ticking of Nolan’s own pocket watch, which Zimmer recorded and sampled. That ticking, Zimmer has pointed out, provided the score with a metric pulse. And Dunkirk is very much a film about rhythm.

Zimmer then resorted to an exceedingly effective compositional “trick” called a Shepard Tone (named for Robert Shepard) that creates the auditory illusion of a tone that continually ascends or descends. It’s been described as “a barber’s pole of sound.”

It consists of several tones separated by an octave layered on top of each other. As the tones move up the scale the highest pitched tone gets quieter, the middle pitch remains loud, and the lowest bass pitch becomes audible. Since you can always hear at least two tones rising in pitch at the same time, your ears are tricked into the illusion that you are hearing a constantly ascending (or descending) tone that can, theoretically, go on forever.

“The crescendos,” explains King, “grow out of silence and they become a crucial element of the film because we experience the anxiety of the moment from the character’s perspective. Christopher wanted the opening scene on the beach, even though there are thousands of men, to be almost surreally quiet. That’s because they are all straining their ears to hear, waiting for that howl of the fighter planes and hoping it’s not coming.”

The manner in which Nolan, Zimmer, and King worked together is emblematic of a new level of collaboration that is taking place between composers, directors, and sound designers. To the point, that more and more composers for film, opera, and the concert hall, are seeing the advantage of acquiring these skills that were traditionally the domain of the sound designer.

“The technical tools we are using now have brought sound design and music scoring together,” King said. “You can orchestrate emotions with sound the same way that the music does.”

At the same time that Dunkirk was premiering in theaters around the world, and Hans Zimmer was getting his act together and taking it on the road, a small, very select group of composers were immersed in a two-week-long retreat organized by the Sundance Institute at Skywalker Ranch, in Marin County.

“This is our fifth lab working with the sound design team at Skywalker,” says Peter Golub, director of the Sundance Institute Film and Music Program. “We offer 10 composer fellowships: six for feature films, four for documentaries. They learn to collaborate and approach music from the filmmaker’s point of view. Each team comprises a director, a composer, and a sound designer. They work together on several scenes from new films that have reached the point of postproduction, but as yet have no musical score. At the end of the lab they have the opportunity to record their scores with an orchestra. In 2017, the program received over 500 applications.”

Stephanie Economou, whose credits include musical contributions to Ridley Scott’s The Martian and The Zookeeper’s Wife, attended the Sundance/Skywalker Lab in 2015. It was the fifth time she had applied.

“I’m actually glad I was accepted when I was because I don’t think I would have been ready to take advantage of all the opportunities that were offered to me. It’s a once in a lifetime experience and you have to be ready to absorb what the program has to offer.”

Like a monastic retreat for moviemakers, Skywalker Ranch nestles in a bucolic valley just off (appropriately) Lucas Valley Road. Its seclusion combined with its state of the art facilities make it one of the world’s most unique sites for film production. From the perspective of Randy Thom (pronounced Tom), the director of Skywalker Sound Design, “The best thing about the Sundance/Skywalker Labs is that composers are encouraged to experiment. They’re not going to get fired. It’s film school at a very high level and one of the rare instances where composers and sound designers literally get to collaborate, to sit in the same room, spot (add sound and music) to a sequence together, talk about who can bring what to the table, and find ways to coordinate each other’s work without stepping on each other’s toes.”

It’s certainly a far cry from the process of making big-budget films in the “real world,” Thom observes with a laugh born out of years working on films ranging from Apocalypse Now and The Right Stuff to The Revenant. (Remember that horrific grizzly attack? All those growls were his.)

“On almost every film I’ve worked on there are very good intentions in the beginning from the director, the composer, and the sound designer about collaborating. But when the rubber hits the road everybody tends to become so obsessed with finishing what they need to get done, there’s very little time for collaboration. Some films [like Dunkirk] are luckier than others.”

Composer Laura Karpman, whose recent scores include Paris Can Wait and The Beguiled, served as a mentor at this year’s Sundance/Skywalker Lab.

“The evolution of technical tools for composers has evolved over time going back to the electronic montages of musique concréte,” Karpman said. “The idea of sampling natural and mechanical sounds as an organic part of a film score is a relatively recent innovation.” Karpman used a sampled recording of a camera shutter as a key thematic element of her score for Paris Can Wait.

Nora Kroll-Rosenbaum (who is married to Karpman) is a Sundance/Skywalker alumnus. Her skill set personifies the crossover skills bridging music composition and sound design. In 2016 she shared a Grammy Award for her sound engineering of Karpman’s multimedia opera, Ask Your Mama, based on the 1961 epic poem by Langston Hughes and featuring the San Francisco Ballet Orchestra.

“Attending the Lab in 2014,” she says, “was life altering, not in its initiation into film scoring, but in the attention and consideration paid to microdetails — the breakdown of the art and craft of writing music for film down to its elemental particles. It’s a place where the music and the sound design live side by side. This new interaction of sound and music is radical and amazing. A lot of it has to do with being aurally open, hearing the world in different ways. For me the psychological impact of designing music, whether as a composer or a sound designer, has codified into a new way of thinking about music and being a musician.”

The continuation of this article will discuss the subject of women making their presence felt as film composers, and how institutions like UCLA and the San Francisco Conservatory of Music have begun offering sound design for composers as a part of the curriculum.