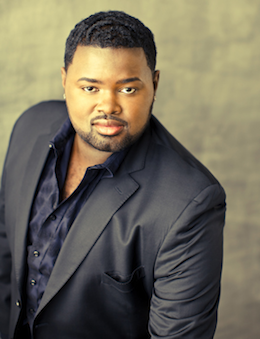 Onstage at the Dorothy Chandler Pavilion — Operalia — the international singing competition, is well into the first day of the quarterfinal round. It's Aug. 25, 2014 and the judges are systematically making notations on their score sheets. Plácido Domingo (who founded the event in 1993) is acting as a gracious master of ceremonies, urging the singers to drink lots of water, while a small group of press and visitors look down from the balcony. In the offices of Los Angeles Opera it’s business as usual with the singing from the stage playing over the intercom.

Then something happens that provides one of the most electric moments of the competition. John Holiday, a 29-year-old African-American countertenor from Houston, Texas comes onstage. Dressed impeccably (with more than a hint of flash) and the solid build of a linebacker, Holiday begins to sing “Crude furie” from Handel’s Serse.

The voice that rang from the stage that day was unique, powerfully clear with clarion high notes and a tone you would have sworn belonged to a woman. In the balcony, people exchanged looks of astonishment. In the opera offices, people stopped what they were doing and listened in rapt fascination. At the conclusion of the aria, the judges requested that Holiday sing “Va pure ad altri in braccio” from Mozart’s La Finta Giardiniera. The effect was equally impressive. I put a big star next to Holiday’s name, picking him as one of the singers to watch. I was right!

Holiday advanced to the semifinals singing the plaintive legato aria “Stille amore” from Handel’s Tolomeo, dropping to his knees as he experienced the emotion expressed in the words. The effect of the perfectly sustained legato line and emotional intensity of the performance were undeniable. I added another star.

By the time the competition ended on Aug. 30 the result was a rare statistical tie. Holiday was awarded third place along with another very talented (though more traditional) countertenor from Russia, Andrey Nezmer. Soon Los Angeles audiences will have another chance to see Holiday, this time in performance, when on Oct. 25 he takes on the role of the Sorcerer in Los Angeles Opera’s production of Henry Purcell’s Dido and Aeneas.

The Man and His Music

It was during rehearsals for the final round of Operalia that I had a chance to sit down with John Holiday and find out more about the man behind the remarkable voice.

“I’m proud to be a Texan,” Holiday said, cutting into a hefty steak. “I tell people I’m from Houston. But actually I’m from Rosenberg (a town of almost 28,000). It’s part of the greater Houston area.”

Like so many members of the African American community, Holiday told me his first exposure to music came in church.

“My grandmother was my earliest musical inspiration,” he recalled. “She played the piano at our church (Missionary Baptist). And she still does. She was pianist and music director. My mother is also a wonderful singer and played the clarinet.”

As a young boy, Holiday’s musical talent revealed itself. He taught himself to play the piano mimicking his grandmother, and later learned to play the organ. But singing was where he truly excelled. He remembers how, when he was 6 (or 7, he’s not sure), his grandmother would sit him on top of the piano and feature his bright soprano voice during church services.

“My first public solo was at Travis Elementary School. I sang ‘Let There Be Peace on Earth.’ That was in the second grade. And I remember thinking, this is pretty cool.”

When I asked Holiday about the racial atmosphere he experienced growing up, he said he never encountered any real discrimination because the schools he attended were heavily mixed, with African-American, Hispanics and European-Americans. It was later in life, when he made the decision to come out openly as a gay man and to eventually marry in the Lone Star State that he experienced prejudice and a lack of tolerance.

“The only thing that I find difficult in Texas is gaining equality for the LGBT community,” he said with determination, “That’s something I would like to see change, especially because I’m married. My husband (Paul Gater) and I have been married since Feb. 4, 2013. He’s not a singer,” he added with a laugh. “I would never date a singer. Not that there’s anything wrong with singers.”

When you meet John, there is an innate gentleness to his nature. He is warm, gracious, and exceedingly well-mannered, which he attributes to the influence of his mother and grandmother. As a boy, he recalled, macho traditional Texas-style activities were not his thing.

“I tried to play baseball,” he remembers. “Then I got hit in the head with a baseball, and I said ‘I’m not doing this.’”

Music was the path that appealed most to Holiday. He joined the Fort Bend Boys Choir as a soprano and progressed from its training level to the performing choir and, ultimately, the touring choir, which was often invited to performed with the Houston Symphony under the direction of Christoph Eschenbach. There was one concert in particular, Holiday said, that changed his life.

“It was during a performance of Berlioz’ Damnation of Faust that I first heard Denyce Graves. I’d never seen anyone who looked like me doing what she did. I’d never thought of being an opera singer. To tell the truth, I didn’t know that world even existed. I decided that was what I wanted to do.”

His vocal education took him to Southern Methodist University in Dallas where he studied with the renowned vocal instructor Barbara Hill Moore, with whom Holiday maintains a steadfast relationship. He refers to as “Prof” and said they were speaking frequently during Operalia. It was during his studies with Moore at SMU that Holiday made the leap to countertenor, a category of singer that, up to that point, he did not know even existed. What he did know was that he could sing really high notes using his natural (not falsetto) voice.

“I told Prof I could sing really high notes, and she said, ‘no, you can’t.’ So I sang “Caro nome” for her. She was shocked. That’s when she told me I could be a countertenor. But she also told me if I decided to become a countertenor there would be no going back.”

There was no going back for Holiday. He immersed himself in the baroque opera repertory and gradually mastered its pyrotechnic demands. From SMU Holiday did his graduate studies at the University of Cincinnati and then was accepted at Juilliard.

He began to enter vocal competitions and, in 2011, took first place in the Dallas Opera Guild Competition. Shortly before his participation in Operalia, Holiday understudied the role of Nireno in the Metropolitan Opera’s production of Giulio Cesare. He never got the chance to go on, but the experience of being at the Met was, to use his word, “amazing.”

So, for John Holiday his next West Coast stage appearance will be in Dido and Aeneas. But keep an eye out, San Francisco Opera cannot be far behind. It’s in the stars.