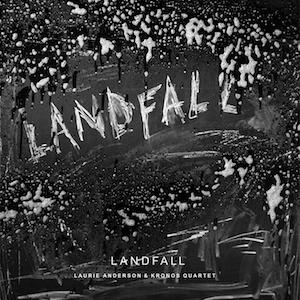 Despite predictions of the record industry’s demise, classical releases continue at a healthy pace. Although the majors have certainly pulled back, of late mixing a handful of new releases each month with bargain-priced anthologies of back-catalog recordings, they are still in the game.

One positive has been the near-ubiquitous adoption of high-resolution recording techniques, with files currently available for download via multiple U.S. sites (including HDTracks, Primephonic, ProStudioMasters, NativeDSD.com, and those owned by the labels themselves). Hi-res streaming is a reality in Europe and poised to reach the U.S. via streaming sites Qobuz and HDTracks (among others). Hi-res yields truer timbres, more realistic dynamic range, and far smoother, more analog-like sound; thus, all but one of these reviews are based on hi-res files.

[Playing hi-res via computer, phone, or pad is as simple as obtaining, for $199, an AudioQuest Dragonfly Red, plugging in headphones or, via a mini-to-stereo RCA adapter, your receiver, amp/preamp, or powered computer loudspeakers.] 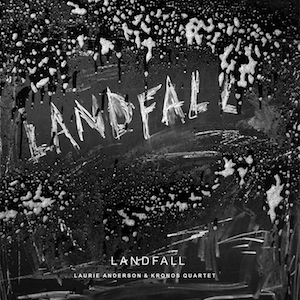 It may seem off-topic to begin with a master of spoken performance art, but 70-year-old Laurie Anderson’s creations are as eloquent as the greatest operatic arias and art songs. Her latest recording, Landfall, turns her first-hand experience of the devastation of Superstorm Sandy into powerful, visionary art that addresses the cataclysmic nature of life in modern times and the universality of loss.

Surprisingly, given that Anderson and Kronos travel in the same circles, Landfall is her first collaboration with the cutting-edge string quartet. Although Kronos founder David Harrington first suggested working together well over 20 years ago, it took until recently for Anderson to turn to the quartet to help tell the stories for which she has become legendary.

Anderson was in the midst of creating a piece for Kronos when Sandy hit New York City on October 29, 2012. The storm not only drove her and her husband, the late Lou Reed, from their downtown Manhattan department, but also destroyed decades of memorabilia, equipment, performance props, and photographs.

From the chaos, Anderson and Kronos created an electronic representation of spoken text — she calls it erst — from which software designer Liubo Borissov melded voice, instruments, samples, pre-recorded soundbites, and more into an extraordinary, all-immersive experience. Recording and mastering engineer Scott Fraser then took over a year to put together a sonic creation so devastating that the absence of the visuals Anderson uses in live performance in no way detracts from the enormity of the experience.

Landfall begins with a sense of deep foreboding, which grows progressively more intense as Kronos joins Anderson’s occasionally electronically-altered voice as they weave in, out, and through low sonic rumbles and a mind-bending tapestry of manipulated sounds. At times, Anderson sounds matter-of-fact as she ponders the unknowns triggered by Sandy. Dreams surface and then trail off, as seeming digressions tell the larger tale of today’s accelerating loss of species, life forms, and so much more of what we hold dear. Landfall’s harmonies are old, but Anderson’s deployment makes them newly arresting. Landfall is a devastating work that also affirms the power of the human spirit. 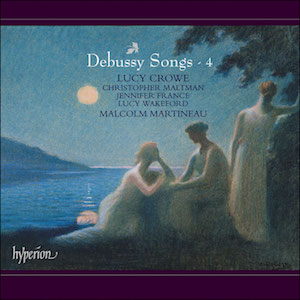 All but five of the selections in Hyperion’s fourth volume of the songs of Claude Debussy (1862–1918) were written in the four-year period that began at the end of 1880, when the composer was 18, which enables this collection to show Debussy’s evolution from a more conventional style of composition to a sound uniquely his own. Save for the two songs of Nuits blanches (White nights), which English baritone Christopher Maltman recorded in 2016, all were recorded by English soprano Lucy Crowe and pianist Malcolm Martineau in late 2013, when Crowe was 35.

Central to the collection’s success is Crowe’s melding of vocal purity and ease of delivery with occasionally disarming depth. Only a bit of breathiness on some of the softly touched, rapidly executed high passages suggests effort. Hers is a lovely voice, as perfectly suited for Debussy’s youthful songs as it is for the final lines of his mature “Beau Soir,” where Crowe’s intentional withdrawal of her mild vibrato expresses the song’s poetic journey to the tomb.

Fifteen of the 29 early songs that Debussy wrote for Marie-Blanche Vasnier are on the album. Here, Crowe’s sweetness and facile coloratura are near ideal. Of great interest are the first versions of three of Debussy’s greatest Verlaine settings, “En sourdine” (Muted), “Fantoches” (Marionettes), and “Clair de lune” (Moonlight), all of which he re-wrote in 1891 as the first set of Fêtes galantes. Along with the later songs – “Mandoline,” “Beau Soir,” and the final “Noël des enfants qui n’ont plus de maisons” (A Carol for Homeless Children), which Debussy composed just days before his operation for the cancer that took his life less than three years later – these first versions present a wonderful picture of a composer in transition.

Crowe’s French pronunciation, the epitome of current French style, eschews the strongly open nasal sounds and more conversational tone of such great early proponents of French mélodie as Pierre Bernac (1899–1979) and Charles Panzéra (1896–1976). As such, some of the songs’ language-induced colors that Debussy undoubtedly expected from his interpreters are absent. Nor does Crowe possess the depth, heart-touching sadness, and freedom of tempo that are among the many hallmarks of the incomparable English soprano Maggie Teyte (1888–1976), who coached with Debussy as his second Melisande at L’Opéra Comique. Crowe’s interpretations are not indispensable, but her singing is nonetheless so lovely and accomplished as to merit a high recommendation. Although Martineau’s piano is far too distantly recorded and reticent, it comes to the fore in his sole short piano solo, “Arabesque.”

The Songs of Brahms, Vol. 7 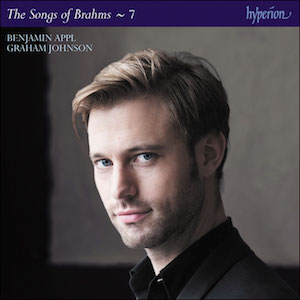 The main draw of this disc is the opportunity to savor the voice of handsome German baritone Benjamin Appl, 36. Any question of what it may mean to have been mentored by the late Dietrich Fischer-Dieskau is addressed, first, by Appl’s very careful attention to enunciation and the meaning of words, and, second, by his intelligent choice of vocal colors. There are a few red flags, including a tendency to muscle up to high notes rather than hit them with ease, a Fischer-Dieskau-like tendency to make more of a simple strophic song than either music or lyrics warrant, and the sense that Appl is putting on a voice rather than simply being who he is. But otherwise, this recital is self-recommending.

Having said that, the material is not that interesting. With songs more or less arranged chronologically, the program begins around the time that Robert Schumann first hailed Brahms as a compositional genius and ends with eight of the 49 Deutsche Volkslieder. There are some gems here, but many of the songs are rarely performed for the simple reason that they are not that interesting.

Brahms, for example wrote “Von ewiger Liebe” and “Die Mainacht” for his Op. 43 collection (1860-1866). Both are amongst his greatest songs and have been recorded often and memorably. Unfortunately, in this new Brahms series, “Von ewiger Liebe” has already been recorded and “Die Mainacht” is being saved for a volume yet to come. What we get instead are the two remaining Op. 43 songs, recorded here for the first time. Invaluable, perhaps, but only to show us what we may not be missing.

There are some gems, including “Nachtigall,” “O liebliche Wangen,” “Verrat,” and the Op. 70 “Serenade.” Those who have heard them performed by, in order of appearance, Elisabeth Schumann, Lotte Lehmann, Hans Hotter, Alexander Kipnis, or the wonderful Thomas Allen will find Appl coming up a distinct second. Nonetheless, if only for the joy of the folksong setting, “So will ich frisch und fröhlich sein,” the collection is recommended. 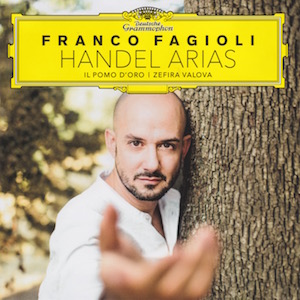 This is major wow stuff. Franco Fagioli, who turns 37 this year, is hardly the first countertenor to record Handel, but he is probably the biggest voiced and most versatile of the lot. Equally at home in the placid, verdant “Ombra mai fu” (Serse), for which he summons up his sweetest and most radiant voice, and the virtuosic “Venti, turbine, prestate” (Rinaldo), which he dispatches with a fury that rivals every countertenor and mezzo rendition you’re likely to hear (including Marilyn Horne’s), he is simply amazing.

Although the recording, which places the voice in an unnaturally resonant chamber not shared by the orchestra, obscures the actual size of Fagioli’s voice, it is undoubtedly much larger than the instruments of such countertenors as Philippe Jaroussky, Andreas Scholl, and David Daniels. Fagioli also retains his roundness of tone while expressing fury at breakneck speed, which is something that Daniels could not do. And where Daniels and others often sound like they’re butching it up when they put on their warrior faces, Fagioli sounds as though he’s just being himself.

Not only is Fagioli’s technique rock solid — he can throw in more notes per second than just about anyone save for Cecilia Bartoli and intersperse them with trills – but he also has an extraordinary range. On this disc, you will hear him dip way low, into his natural male voice, and then ascend up the scale without any noticeable range break until, in the aforementioned aria from Rinaldo, he ventures into soprano territory. He is also capable of some of the longest breathed lines you’re likely to hear from a countertenor.

Fagioli’s only weakness is that he’s so good at what he does that he has a hard time restraining himself. He throws in so many extra notes — how many cups of coffee does this man drink per day? — that, at times, his interpretations are exhausting. That the recording’s uncredited harpsichordist seems determined to be his equal results in more than one inappropriate flourish where simplicity is called for.

I would never be without Jaroussky’s exquisite rendition of “Se potessero I sospir miei” (Imeneo), which is far more poised and pearly-toned than Fagioli’s. But for the athletic stuff, Fagioli cannot be beat. Take a deep breath, play this recording, and prepare to be astonished.

In recent recordings, the S.F. Symphony gives us a bevy of Bates, Philharmonia Baroque resuscitates a serenata, and American Bach Soloists air a rarely-performed version of Handel’s Messiah.

New Releases Make for a Triple A Cappella Fest

Reviews of albums by the UK group Voces8, Anonymous 4 and Norway’s Trio Mediaeval.

Next Wave Audio: The Affordable Revolution in High-Resolution Recording