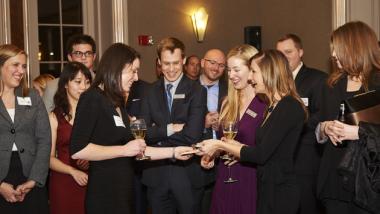 It’s no secret that classical music organizations around the country are dubiously haring after that most evasive of demographics, the Millennial.

Symphonies are attempting to lure these 22-to-37-year-olds with drastically increased social media presences, discounted tickets, and exclusive backstage access. Opera companies are capitalizing on the socializing aspect of their milieu and setting snares of free hors d’oeuvres and drinks during intermissions. Musical institutions around the nation are rapidly preparing and codifying lists of benefits and creating individual “young professionals clubs” to attract and retain a younger demographic of listeners.

Some organizations, like the San Francisco Symphony and Houston Grand Opera, have long-established clubs that boast hundreds of members. Others, like the Atlanta Symphony Orchestra or The Cleveland Orchestra, have initiated their clubs within the past few years and are still experimenting with different formats and benefits. The average age of club members ranges from roughly late-20s to early-30s; most clubs’ age ranges are 25-40 years old.

There are six more or less universal components among different organizations’ clubs:

To the last point, The Cleveland Orchestra’s club, known as The Circle, is literally a part of their Center for Future Audiences, established in 2010 with a $20 million grant to help fund efforts to draw younger listeners. The Circle, founded in 2014, has 339 members who meet about once a month for concerts, pre- or post-concert meet-and-greets with musicians and guest artists, breakfasts with board members, and even an annual trivia night with the Cleveland Museum of Art’s comparable group.

“The trivia night is always wildly popular,” said Ross Binnie, the orchestra’s chief brand officer, who emphasized the importance of starting with a core group of volunteers. “They [the young professionals] want the behind-the-scenes access, they want the concert, they want the social aspect, and they want the networking. Those are the keys to our success.”

According to Binnie, The Circle is the fastest-growing young professionals organization in Cleveland, a city with dozens of such clubs. He also said that The Circle as well as other audience-building efforts have lowered the average age of symphony-goers in Cleveland from one of the oldest in the nation to one of the youngest.

On the West Coast, the San Francisco Symphony has one of the nation’s longest-established young professional’s groups. Symphonix once had well over 400 members, but within the past couple of years the club’s organizers have been shifting priorities from fundraising toward educating members about the value of the symphony and building relationships between members and the orchestra.

Kevin Yeh is a longtime supporter of the symphony, and he’s been involved with Symphonix since 2015.

“The [Symphonix volunteer] board was focused on the socializing aspect of the group to the exclusion of any real meaningful connection with the symphony,” Yeh said. “A lot of the people on the Symphonix board this year are very passionate about classical music, and we decided to refocus our mission a bit more and focus on getting young people to slowly develop a commitment to the symphony.”

Since this adjustment, Symphonix membership has dropped into the low 200s, but Yeh is optimistic that it will pick back up. Like Cleveland’s Circle, Symphonix events are a mixture of pre- and post-concert events, private parties at exclusive clubs or penthouse suites — Yeh said that all spaces are donated, as the club doesn’t receive funding from the San Francisco Symphony — and an annual cruise around San Francisco Bay, donated by a local boat company.

With an aggressive volunteer board, these organizations can find and provide spectacular spaces and events to promote the symphony. Yeh said that clubs and real estate companies are often interested in marketing their spaces to the demographics of the young professionals clubs that the symphonies are seeking.

“Just partying doesn’t raise awareness of why this is an organization you should support after the party is over,” Yeh said. “We think that that is a better way to get younger attendees.”

Cleveland’s Circle and San Francisco’s Symphonix have monthly and annual membership fees respectively ($95 a year for the latter). Houston Grand Opera, on the other side of the spectrum, doesn’t charge a membership fee, but only invites subscribers to their young professionals organization. The club, called Opening Nights for Young Professionals, was founded in 2007 and has just over 400 members. The total number of subscribers at Houston Grand Opera is about 5,800.

According to Dale Edwards, the opera’s director of marketing and communications, Opening Nights for Young Professionals members do graduate to become young patrons or even young trustees with some regularity.

“During intermission we provide complimentary drinks and hors d’oeuvres in an exclusive area of the Wortham Theatre,” Edwards said. “We also do a lot of events throughout the year, like a season kickoff at a new restaurant or lounge every season, where either an artist or administrator will appear and tell them about the coming season. We add a little piece of opera into each of our get-togethers.”

The non-opening night events are roughly quarterly, and Edwards said that most of the 400 members show up to each happy hour or outdoor happening. The group often reaches out to other performing arts young professionals groups in the city to invite them to consider joining; ONYP is the largest performing arts young professionals group in the city and has a 16-member volunteer committee.

As the newest and smallest of the clubs represented here, the Atlanta Symphony Orchestra’s BRAVO club is growing rapidly. BRAVO has gone through several different iterations in recent years, and as of last season, it has been relocated from development to marketing and is now being treated as an audience-building initiative instead of a fundraising project. This has helped, according to Tammy Hawk, the orchestra’s senior director of marketing and communications. BRAVO currently has 70 members after its first year under the marketing department.

“At this juncture, it’s not about volunteering and donating, it’s about enjoying music and meeting other people and having fun,” Hawk said. “So that’s what really happened. The purpose is really audience building. For this group we know that we have a lot of music loving, arts minded people in the community with people that are in their demographic.”

One such arts-minded Atlanta citizen is Brett Tarver, an attorney and the volunteer chair of BRAVO. Tarver said that she brings a different friend to each of the quarterly BRAVO events, some former musicians (like Tarver herself) and some classical music neophytes.

“For those without prior music experience, I think some were nervous that they would be bored or unable to understand or connect with the music,” Tarver said in an email exchange. “Two of my friends who had never been to a symphony concert before they attended a BRAVO event have been back to the symphony (without me!) since then… Before they attended a BRAVO event, going to something at the symphony was not on their radars.”

Tarver said she thinks the focus of these clubs should be on highlighting the idea that attending the symphony is not just pleasant listening, but also a chance to become further educated culturally and involved in local arts.

“Adding in the social and professional networking aspects of a group like BRAVO also helps convince those with and without experience that attending events in conjunction with the symphony can help grow their networks in a way that is different from traditional ‘networking,’” Tarver wrote.

Organizations can tinker with membership fees and the locations for the happy hours and the exact nature of the benefits, but at their core, these young professionals groups are really about finding a group of young, passionate symphony-goers willing to roll up their sleeves and help share their passion with their friends. Every organization spokesperson emphasized the importance of the volunteer organizers of their clubs, especially given that orchestras often have little capital to spend on such initiatives.

Cleveland’s Ross Binnie summed it up best: “We can’t come at this with the mindset of ‘we need to have a young professionals program because everyone else does and it’s a good idea.’ I would absolutely start with a few core members who wanted to do this. I wouldn’t be an orchestra that wants a club and tries to have some staff members start it. The best way is to equip those interested in starting one with the tools and support to make the events really good. That’ll keep people coming back.”