Going up at 200 Van Ness Avenue, the building is in the prime of prime Civic Center locations, on the corner of Hayes Street, one block from City Hall, and directly across the street from Davies Symphony Hall. Also, not incidentally, it will be three blocks from the Conservatory itself.

Groundbreaking is scheduled in a few months and the building's opening is anticipated in 2020. The building, designed by Mark Cavagnero Associates, is to provide housing for 420 students and accommodate two multi-use recital halls, a restaurant, classrooms and rehearsal spaces for ensembles, practice rooms, a recording studio and technology hall, a large observation deck and garden, conference facilities, a student center, and several apartments for visiting artists and faculty.

Four years ago, Conservatory President David H. Stull announced plans for “a residential hall for students, faculty, and visiting scholars in the Civic Center.” At that point, $17 million had been pledged in donations to the project.

The following year, the school filed a preliminary application with the Planning Department to build an 11-story tower, a 140-unit building to house about 300 students and faculty and include a publicly accessible performance space. Plans have been expanding since --- along with the cost.

The filing came after the Conservatory bought the Lighthouse for the Blind building at 214 Van Ness Ave., a 13,000-square-foot commercial building, as well as the 27-unit, rent-controlled residential building next door at 200 Van Ness Ave.

The existing SFCM building at 50 Oak Street will remain in active use through the construction of the new building and after it is completed.

“This project will fuel the unlimited potential of this institution and serve as a beacon for the innovative artists who will lead the next generation,” said Stull today, announcing the donation. 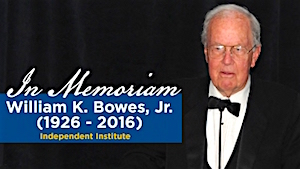 “Bill Bowes believed that music and beauty are essential to life and that education offers the best promise for tomorrow. I am profoundly grateful to both Bill and Ute for their inspiring investment and their transformative impact on our school. We miss Bill very much and none of this would have been possible without him.”

Bowes, who died in December 2016, was a longtime supporter of the arts and an SFCM trustee for 22 years. He co-founded the successful venture capital firm U.S. Venture Partners and established the William K. Bowes, Jr. Foundation in 1991, providing financial support for the arts, scientific research, the environment, higher education, and other areas.

Bowes was an important supporter of the Conservatory's big move to the Civic Center; he founded programs in Technology and Applied Composition and Roots, Jazz, and American Music. He was instrumental in acquiring two parcels of real estate where the project will be located.

SFCM honored Bowes at its 2016 gala with an evening of performances and a video tribute to him. In his interview, Bowes spoke about his appreciation for the discipline of music education, sharing this simple fact: “music makes me happy.”

The Bowes Center will feature student housing units that can accommodate 420 individuals. The suites, which are laid out in two- and three-bedroom configurations, are located on nine of the twelve above-ground floors of the building. Each suite contains a full bathroom, kitchenette, and living area, and is designed to accommodate small ensemble rehearsals and individual practice.

The twelfth floor includes several guest suites that will provide housing for visiting faculty, guest artists, and others hosted by the Conservatory.

Kirkegaard and Associates will provide acoustic engineering for performance venues in the new building. The announcement specifies the creation of the Jewel Box Recital Hall on the lobby level, seating just over 100 and available for music and dance performances. It is planned with floor-to-ceiling glass walls that extend to the second floor with views of Van Ness Avenue and Hayes Street.

The Penthouse Recital Hall on the 11th floor is to seat more than 200 people. Floor-to-ceiling glass walls should provide views of City Hall, Davies Symphony Hall, the War Memorial Opera House, and other buildings in the area.

The third and fourth floors of the Bowes Center will consist of 27 apartments serving as replacement housing at a rent-stabilized rate for the residents who have elected to remain at the location. They will be relocated to a neighboring high-rise building during construction and will be moved into the Bowes Center with the terms of their existing rental agreements.

Nothing Conservative About the S.F. Conservatory's Big Plans

There is important news from the San Francisco Conservatory and the promise of more to come. At a recent gala President David H. Stull spoke both of impressive specifics and big ambitions.

Modest Footprint for a Vast Future: Colin Murdoch at the S.F. Conservatory

Modest to a fault, the outgoing president of the S.F. Conservatory of Music has much to crow about, having led the Conservatory to a new facility, international prominence, and an inspired focus on music education.

Christoph Lieben-Seutter on Building a Concert Hall for the Future

The general and artistic director of the Elbphilharmonie and Laeiszhalle talks to SFCV about the project and how it has evolved for events the project leaders haven’t even thought up.